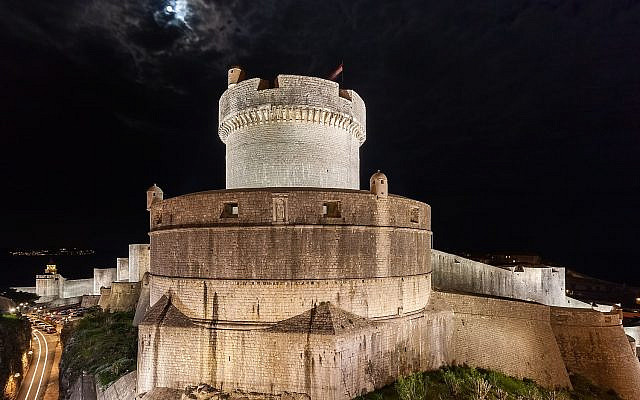 Today, Dubrovnik is a lovely small seaside city of just over 40,000 residents, at the southern top of Croatia. It is a UNESCO World Heritage site and popular tourist destination on the Mediterranean coast.

You have seen parts of Dubrovnik if you watched the TV show Game of Thrones.* The beautiful Pile Gate entrance to the Old Town is the backdrop to many scenes. “King’s Landing” is actually the harbor between and the stark Bokar Fortress on the left and hilltop Fort Lovrijenac on the right.

Fort Lovrijanec was also where they held the naming ceremony for King Joffrey and the celebratory tournament afterwards.

The highest point in Dubrovnik is Minceta Tower, which is also where Daenerys Targaryen searched for an entrance to the walls while chasing after her stolen dragons.

Dubrovnik was first recorded as the Slavic name of the city in the late 12th century. But since at least the 10th century, the city has also been known by its Italian name, Ragusa. This name is likely a corruption of the Greek word lausa, meaning “rock” and points to the rocky nature of the island on which the city was founded.

For a couple of hundred years Ragusa was a republic, but from 1205 until 1358 (after the Fourth Crusade) it came under the suzerainty of Venice, remaining independent but paying tribute to the Italian Republic.

During its time as part of the Venetian Empire and afterwards, Ragusa was a world-leading pioneer in medicine. It introduced a medical service in 1301 (the first pharmacy was opened in 1317 and still operates today).

Records show that from 1342 until 1344 magister Jacobus de Padua was the chief medical officer of the city. 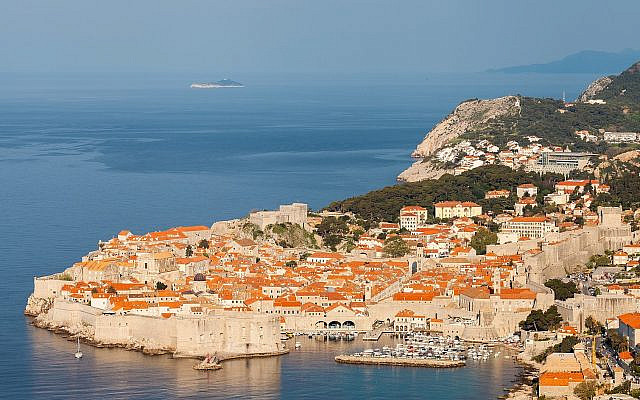 I found a couple of sites on the internet that claimed that Jacob was Jewish, and I spent way too long trying to find a reliable source to back up that claim. I even reached out to Dr Jeremy Brown, (author of “Influenza: The Hundred-Year Hunt to Cure the Deadliest Disease in History” and the wonderful Talmudology blog) who was kind enough to answer me but was unable to confirm Jacob’s religion.

Although he may have been Jewish, it seems to me that it was more likely that he was the “Christianized Jew” referred to in Bariša Krekić’s book “Dubrovnik in the 14th and 15th centuries: A City Between East and West.”

What we do know about Jacob (apart from the fact that he was from Padua) is that he was paid an annual salary of 300 Ragusan perperi (perperi was a Byzantine coin also minted by the Venetians and many other countries, though I’ve no idea what the modern exchange rate would be).

The other, more significant thing we know about Jacob of Padua was that he was perhaps the first person in the world to isolate visitors who came to the city to prevent the spread of disease. As the Black Death ravaged Europe, Jacob hypothesized that the plague was being transmitted by visitors coming to the port from overseas. He had the city build a hostel outside the city walls where all visitors had to remain until it was clear they were no longer infectious, before they were permitted to enter the city. 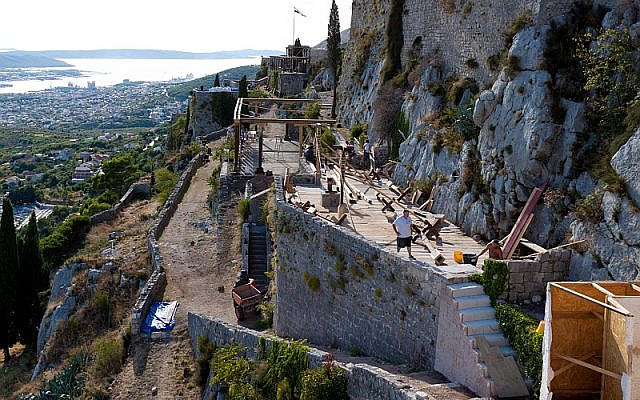 In this, Jacob was well ahead of his time. Today, it seems obvious that disease can be spread by germs transmitted from one person to another, but in the 14th century (and well beyond) most Europeans believed that disease was caused by bad air.

The “miasma” theory of disease holds that poisonous vapor in the air causes disease. The Roman architect Vitruvius, writing in the first century BCE stated that:

For when the morning breezes blow toward the town at sunrise, if they bring with them mist from marshes and, mingled with the mist, the poisonous breath of creatures of the marshes to be wafted into the bodies of the inhabitants, they will make the site unhealthy.

The idea was later adopted and developed by Galen (129 CE – 200 CE) and became the dominant theory in Europe until the late 17th century.

The miasma theory of disease may be what the 3rd century Talmudic sages Rav and Shmuel refer to as injury caused by “hevel” (Bava Kama 50b), a term which literally means “hot air.”

So, Jacob of Padua was ahead of the rest of Europe. He may have intuited on his own that the plague was being spread from person to person. But perhaps he was also familiar with the writings of Ibn Sina, a 9th century physician and philosopher born in modern-day Uzbekistan, which was then the capital of the Samanid Empire. His name was Latinized as Avicenna, and his works were translated into Latin with the aid of Jewish interpreters. 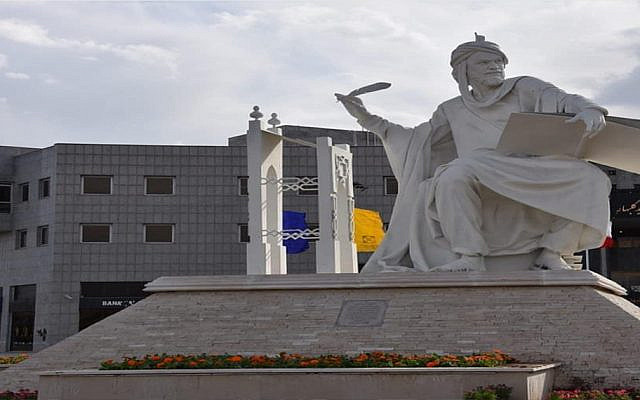 Ibn Sina is cited by several medieval Jewish writers, including most notably Samuel ibn Tibbon (who among other things translated Maimonides’ “Guide for the Perplexed” into Hebrew). Maimonides himself stated in a letter to ibn Tibbon that ibn Sina’s works deserved to be studied, but preferred the medical works of ibn Rushd (also known as Averroes).

So, it is possible (especially if he had a Jewish background) that Jacob was familiar with the works of the Islamic philosopher and introduced it to Ragusa.

By 1377, Ragusa was a free state (though a few years later, in 1382 it would become part of the Ottoman Empire, paying an annual tribute to the sultan).

As another wave of the Black Plague spread through Europe, the city’s Great Council enacted a law requiring anyone coming to the city and anyone who had come into contact with them to isolate themselves on a nearby uninhabited island for 30 days. This was based on the correct belief that if they were asymptomatically carrying the disease they would show symptoms within that time. This was known as trentino.

Later this isolation period was extended to 40 days (quaranta) which is how we got our modern word “quarantine.”

It is unclear why they extended the period to 40 days. It is possible that medics of the time were concerned that the plague would not manifest within 30 days alone.

It is possible that they preferred the religious significance of 40 days in isolation. Perhaps they wanted to reflect the 40 days and 40 nights of rain that saved Noah from destruction. Or the 40 days that Moses was alone atop Mount Sinai receiving the Torah. Or perhaps they took the number from the 40 days of Lent, from Ash Wednesday to Easter Sunday, when Christians take on extra restrictions and separations.

Whatever the reason, the name quarantine stuck, though the 40 days did not.

The idea of quarantine is found in several places in the Torah, most notably in the treatment for tzaraath (often mistranslated as leprosy). Leviticus chapters 13 and 14 describe periods of isolation prescribed for people suffering tzaraath on their skin, hair, clothing or homes.

A different idea of separation and isolation is found at the end of this week’s Torah reading, Tzav. Leviticus 8:33-35 states that Aharon and his sons are commanded to remain inside the Tent of Meeting for seven days and may not set foot outside.

This seven-day quarantine to consecrate the five priests follows purification rites, described in Leviticus 8:24-27 that are very similar to that of someone who has recovered from tzaraath.

The peculiar thing about the purification and isolation of Aharon and his sons is that it was done in reverse order. Someone suffering from tzaraath must first self-isolate, then undergo the purification process. The fledgling priests were first purified, then isolated.

What is even more surprising is that the instruction to remain inside for seven days is similar to the laws of the shiva period, where mourners do not leave the home for seven days after the death of a close relative.

However, in the case of Aharon, he and his sons first sat shiva for seven days. Then, on the seventh day, the first day of the month of Nisan, when the Tabernacle was inaugurated, two of Aharon’s sons, Nadav and Avihu, died. And Aharon was instructed by Moses that as High Priest, he must not follow the usual mourning process of shiva.

So, everything was in reverse order. Since Nadav and Avihu sat with their father and two brothers for seven days inside the Tent of Meeting, that was perhaps the only time in history that people sat shiva for themselves.

Whatever the explanation or reason for the back-to-front mourning and purification, it is clear that Aharon and his sons had to undergo a spiritual quarantine to consecrate them for service in the Tabernacle. The days they sat alone, separated from the rest of the congregation, enabled them to reach a higher spiritual level. It also somehow connected them more with the rest of the Children of Israel, because priests became the representatives of the entire nation in the sacrificial service of God.

This week is also Shabbat Hagadol, the Shabbat before Passover. One of the reasons it is named “Hagadol” – the great Sabbath, is because of the miracle that happened on that Shabbat before the Israelites left Egypt. They were instructed to bring a sheep into the house and leave it tied to the bedpost. The sheep was sacred to the Egyptians, yet the Israelites were able to prepare their sacrificial Paschal Lamb without being attacked by their oppressors. Back in Egypt, the faithful remained locked inside their homes until the moment of redemption arrived and they went free from their bondage.

Another reason this week is called Shabbat Hagadol is because the Haftarah, the reading from the prophets that accompanies the Torah reading, ends with the promise of future redemption. The verses are from the last of the prophets, Malachi, and the penultimate verse of his book states (Malachi 3:23):

Behold I will send to you Elijah the prophet, before the coming of the great and awesome day of God.

This is a peculiar year. We are all sitting in quarantine inside our homes, isolated from our friends, family and society. For some, this will be the first year they will lead a seder. For many, it will be the first (and hopefully only) time they have Passover seder entirely alone. It is depressing that we cannot be with our families and loved ones at this special time.

But it is also potentially a time for spiritual growth, like that of Aharon and his sons, and part of the preparation for redemption, as described in the Haftarah. 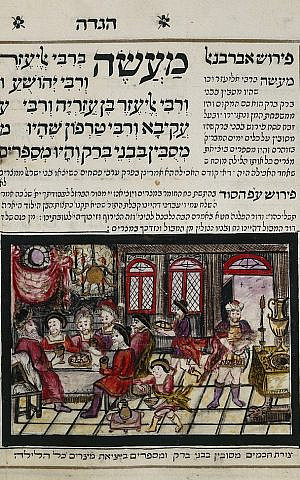 And I think of the five rabbis of the Hagaddah, Rabbi Yehoshua, Rabbi Eliezer, Rabbi Akiva, Rabbi Elazar ben Azariah and Rabbi Tarfon, who were isolated in Bnei Brak, fearing the Roman occupation. According to the Hagaddah they spent the entire night discussing the redemption and how they would celebrate the messianic era.**

* I have not seen “Game of Thrones” but I’m told it was a very popular show. I managed to find out the information about the locations from the internet. It is amazing how much you can find on the internet.

** For more of my thoughts of that rabbinical discussion in Bnei Brak listen to my WebYeshiva class on the subject.

About the Author
David Sedley lives in Jerusalem with his wife and children. He has been at various times a teacher, translator, author, community rabbi, journalist and video producer. He currently teaches online at WebYeshiva. Born and bred in New Zealand, he is usually a Grinch, except when the All Blacks win. And he also plays a loud razzberry-colored electric guitar.
Related Topics
Related Posts
David Sedley
Comments