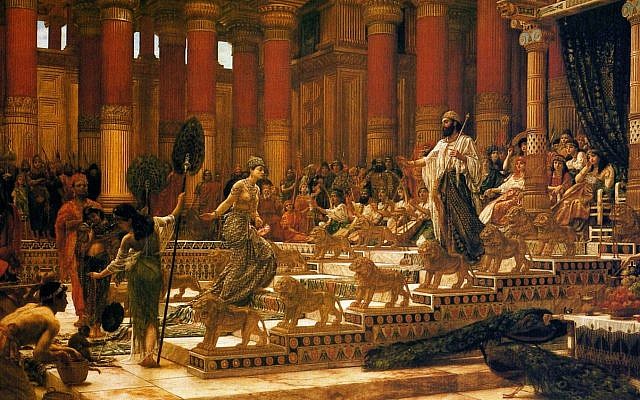 'The Visit of the Queen of Sheba to King Solomon', by Edward Poynter, 1890. (Public Domain, Art Gallery of New South Wales/ Wikimedia Commons)

The Scottish enlightenment influenced so much of the modern world. The philosophy of David Hume, the literature of Robbie Burns, James Boswell and Walter Scott, the economics of Adam Smith and the mathematical and scientific advances of Thomas Carlyle, James Watt, William Murdoch, James Clerk Maxwell and Lord Kelvin, to name just a few, shaped the future of the Western world.

A less well-known name from this period is that of James Bruce of Kinnaird, who lived from 1730–1794. He spent years exploring North Africa and especially Ethiopia, and discovered the source of the Blue Nile. He wrote about his travels in a multi-volume work entitled “Travels to Discover the Source of the Nile, In the Years 1768, 1769,1770, 1771, 1772 and 1773.” He also brought back with him many African writings, leading to a wider interest in Britain for studying African culture and heritage.

Bruce taught himself both Arabic and Ge’ez so he was able to speak to and understand the Ethiopian people more than many of those who had come before him. His knowledge of the language, his impressive physical appearance (he stood six foot, four inches tall) and self-esteem earned him the respect and trust of the Emperor Tekle Haymanot II and the unofficial leader of Gondar, Ras Mikael Sehul. Bruce remained in Ethiopia for two years and writes that he was appointed to the positions of Gentleman of the Bedchamber and commander of the Koccob Horse, the Emperor’s household cavalry. 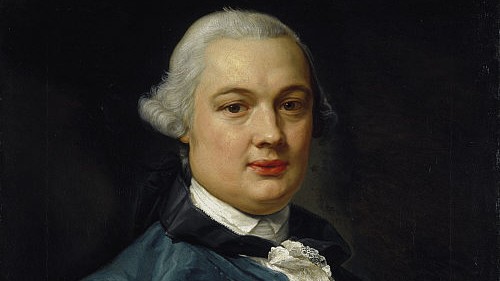 Bruce’s travels and his writings improved the knowledge of the geography of northern Africa. He also brought back with him to Britain at least 27 Ethiopian manuscripts previously unknown to Western scholars, including Kebra Nagast (The Glory of the Kings) which chronicles the lineage of the Ethiopian rulers back to King Solomon and the Queen of Sheba through their son Menelik.

The book also tells the story of how an angel appeared to Azâryâs, the son of the high priest who was loyal to Menelik, and instructed him to replace the Ark of the Covenant kept in the Temple with a wooden imitation and bring the original with him as he accompanied Menelik from Jerusalem to Ethiopia.

And behold, the Angel of the Lord appeared again to Azâryâs and he stood up above him like a pillar of fire, and he filled the house with his light. And he raised up Azâryâs and said unto him, “Stand up, be strong, and rouse up thy brother Êlmĕyâs, and ’Abĕsâ, and Mâkarî, and take the pieces of wood and I will open for thee the doors of the sanctuary. And take thou the Tabernacle of the Law of God, and thou shalt carry it without trouble and discomfort. And I, inasmuch as I have been commanded by God to be with it forever, will be thy guide when thou shalt carry it away.” 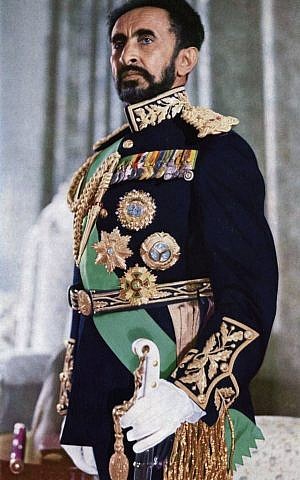 Menelik became the first emperor of Ethiopia, and for the next 225 generations, all future leaders of the nation were descended from him. The last Emperor of Ethiopia, Haile Selassie, was deposed in 1974, but remains a messianic figure for Rastafarians.

In his book, “The Pale Abyssinian: A Life of James Bruce, African Explorer and Adventurer,” Miles Bredin claims (though with scant evidence) that Bruce, a lifelong Mason, actually went to Ethiopia in order to find the Ark of the Covenant which he believed may have been taken there.

In volume three of his “Travels,” Bruce describes visiting the church where locals claimed that the Ark was kept.

In the angle of this platform where that temple stood, is the present small church of Axum, in the place of a former one destroyed by Mahomet Gragné, in the reign of King David III; and which was probably remains of a temple built by Ptolemy Evergetes, if not the work of times more remote.

The church is a mean, small building, very ill kept, and full of pigeons dung. In it are supposed to be preserved the ark of the covenant, and copy of the law which Menilek son of Solomon is said, in their fabulous legends, to have stolen from his father Solomon in his return to Ethiopia, and these were reckoned as it were the palladia of this country. Some ancient copy of the Old Testament, I do believe, was deposited here, probably that from which the first version was made. But whatever this might be, it was destroyed, with the church itself, by Mahomet Gragnè, though pretended falsely to subsist there still. This I had from the king himself.

So, despite local legend, Bruce was certain that the Ark was not kept in the church of Axum (also spelled Aksum). 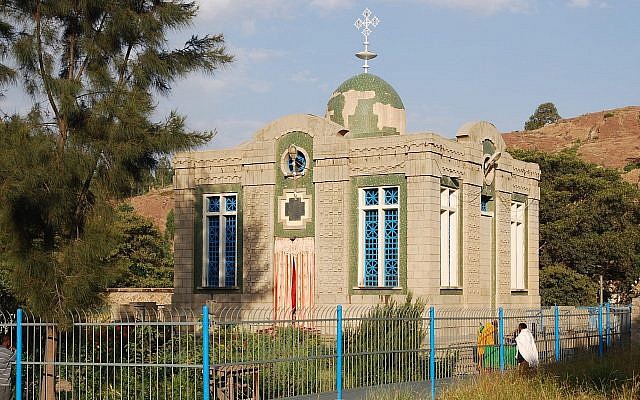 Nevertheless, many believe that the Ark still remains in the Church of Our Lady Mary of Zion in Axum. The church belongs to the Ethiopian Orthodox Tewahedo Church and it is a pilgrimage site for the faithful. Only one person, the custodian, may enter the room where the Ark said to be kept, and there are very strict rules about purity in the area of the church.

So while in “Raiders of the Lost Ark,” Indiana Jones ensures that the Ark is safe in Hangar 51, many people to this day believe that the Ark is actually in a church in Axum.

A few weeks ago, I went with Corey Gil-Shuster while he was out filming for his “Ask an Israel/Ask a Palestinian” project. One of the questions he asked — which like most of his questions was submitted by someone from outside Israel — was where the Ark is today. The questioner assumed that everyone would answer that it was in Ethiopia, but in fact, not a single Israeli gave that answer. A couple of people ventured that it was buried somewhere under the Temple Mount, but most people said they had no idea and had never even thought about it before.

The truth is that this ambivalent connection with the Ark, which we read about in this week’s Torah portion (Exodus 37:1-9), is part of the changing relationship between the Jewish people and the Ark of the Covenant. 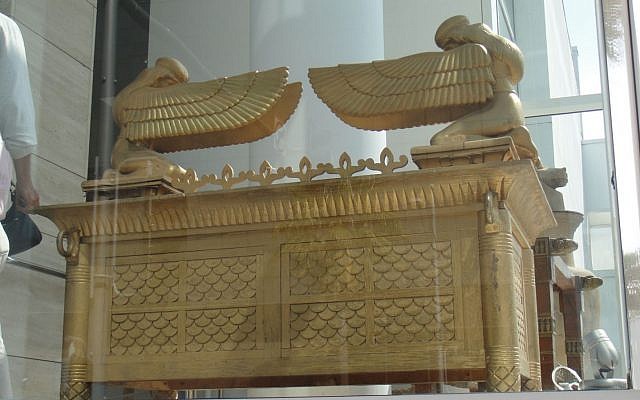 According to Rashi (Exodus 31:18), the Israelites were only commanded to construct the Mishkan and the Ark of the Covenant after they sinned with the Golden Calf. In other words, the Ark, with its golden cherubs on top, was the antidote to idolatry.

Although the Ark was kept in the Holy of Holies inside the Mishkan, it was occasionally taken out, and even used in battle. Thus the Ark travelled before the camp as they journeyed through the desert (Numbers 10:33), Pinchas took the Ark with him when he led the battle against the Midianites (Rashi on Numbers 31:6), the Ark led the Israelites across the Jordan river as they entered Israel (Joshua 3) and when they conquered Jericho (Joshua 5), and was taken into battle against the Philistines (I Samuel 4).

Then, a few hundred years later, the Ark became more concealed. From the time Solomon brought it into the Temple, it was never displayed publicly, but could only be seen on one day a year by the High Priest, as he performed the service of Yom Kippur. All that could be seen of the Ark from outside were the two carrying poles which protruded through the curtain dividing the Holy of Holies from the Holy section of the Temple.

Then, several hundred years later, King Josiah hid the Ark in a cave underneath the Temple, knowing that eventually the Temple would be destroyed and its treasures carried off to Babylon.

Since that time, including for the hundreds of years when the Second Temple stood, the Jewish people managed without the Ark. The High Priest would place the Yom Kippur incense on the rock that was inside the Holy of Holies, but there was nothing else in there.

In fact, Maimonides (Laws of the Temple 4:1) explains that from the moment King Solomon built the First Temple, he planned that the Temple would eventually be able to function without the Ark.

There was a stone in the west of the Holy of Holies and the Ark was placed upon it… When Solomon built the Temple, knowing that eventually it would be destroyed, he built a place to conceal the Ark beneath, in the deep, twisted caves beneath.

Even when the priests discovered where the Ark was buried, not only did they not try to restore it, but they understood that God’s will was that it remain concealed (Yoma 53b). 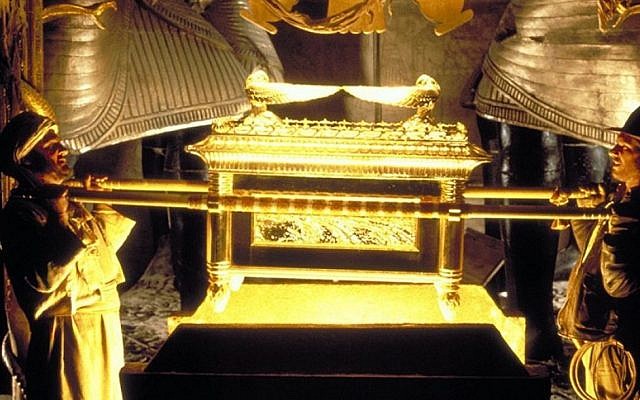 The Ark Of The Covernant In Indiana Jones And The Raiders Of The Lost Ark. (CC BY-SA, Rehaan10/ Wikimedia Commons)

The gradual concealment of the Ark, which was the replacement for the Golden Calf idol, to a state where the Ark was no longer necessary is in keeping with Maimonides’s view that many of the Torah laws were given because the Israelites had to gradually be weaned off the idolatry they had practiced in Egypt towards the true service of God, as he writes in Guide for the Perplexed 3:32.

It is, namely, impossible to go suddenly from one extreme to the other: it is therefore according to the nature of man impossible for him suddenly to discontinue everything to which he has been accustomed… He did not command us to give up and to discontinue all these manners of service; for to obey such a commandment it would have been contrary to the nature of man, who generally cleaves to that to which he is used… He transferred to His service that which had formerly served as a worship of created beings, and of things imaginary and unreal, and commanded us to serve Him in the same manner.

As the desire for service idols weakened so the Ark became less essential until eventually it was concealed completely.

James Bruce failed to discover the Ark, but brought back rich geographical and cultural knowledge of Africa. In a similar way, Judaism lost both idolatry and the Ark, but replaced them with a rich culture and heritage which has been maintained until the present day.

The “Ask an Israeli” episode about the Ark should be on Corey’s YouTube channel in a couple of weeks. In the meanwhile, you could watch some of the hundreds of videos he has made, or follow him on Facebook.