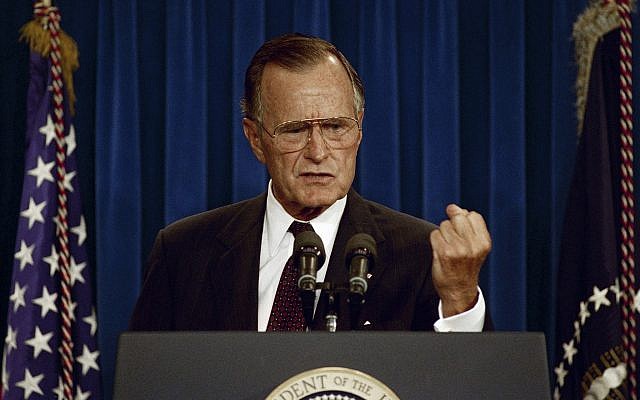 On November 30, 2018, George H. W. Bush, the 41st president of the United States, passed away at his home in Houston, Texas, nine months after the death of his wife Barbara. On December 3, his body was flown from Ellington Base to Washington DC, where it lay in state at the Capitol for two days, followed by a funeral service attended by President Donald Trump and three former presidents.

Then his body was flown back to Texas, where a second funeral service was held.

Finally, his body was transported by train to the George Bush Presidential Library where he was buried next to his wife. Mourners lined the tracks as a Union Pacific locomotive named Bush 4141 pulled the carriages carrying the former president and his family the 100 kilometers (70 miles) to his final resting place.

Bush was the first president in almost 50 years to make his final journey by train, but it is a tradition going back to John Quincy Adams, who died 170 years ago.

However, it was Abraham Lincoln, assassinated in 1865, for whom the final train ride became an outpouring of national grief shared by mourners across the country.

After lying in state for a week in the capital, Lincoln’s body was transported 2,662 kilometers (1,654 miles) from Washington to his hometown of Springfield, Illinois in a trip that took almost two weeks.

Along its journey through seven states retracing Lincoln’s journey to the White House four years earlier, the train stopped in Baltimore, Harrisburg, Philadelphia, New York, Albany, Buffalo, Cleveland, Columbus, Indianapolis, Michigan City, and Chicago. In each place, his body was taken off the train and traveled on a horse-drawn hearse to a public building to lie in state as altogether millions of Americans paid their final respects to Lincoln.

As an interesting historical aside, according to President Theodore Roosevelt’s widow, Edith, a young Theodore and his brother Elliott can be seen in a photograph of Lincoln’s funeral procession, looking out of the open second story window of their grandfather Cornelius Van Schaack Roosevelt’s home at the corner of Broadway and Union Square in New York.

A local reporter described Lincoln’s funeral train as it pulled in to Springfield:

In the mellow air and bright sunlight of this May morning, sweetened by the rain of last night, when those prairies are clothed in flowers, and the thickets of wild fruit trees, and blossoming orchards are jubilant with birds, he comes back. 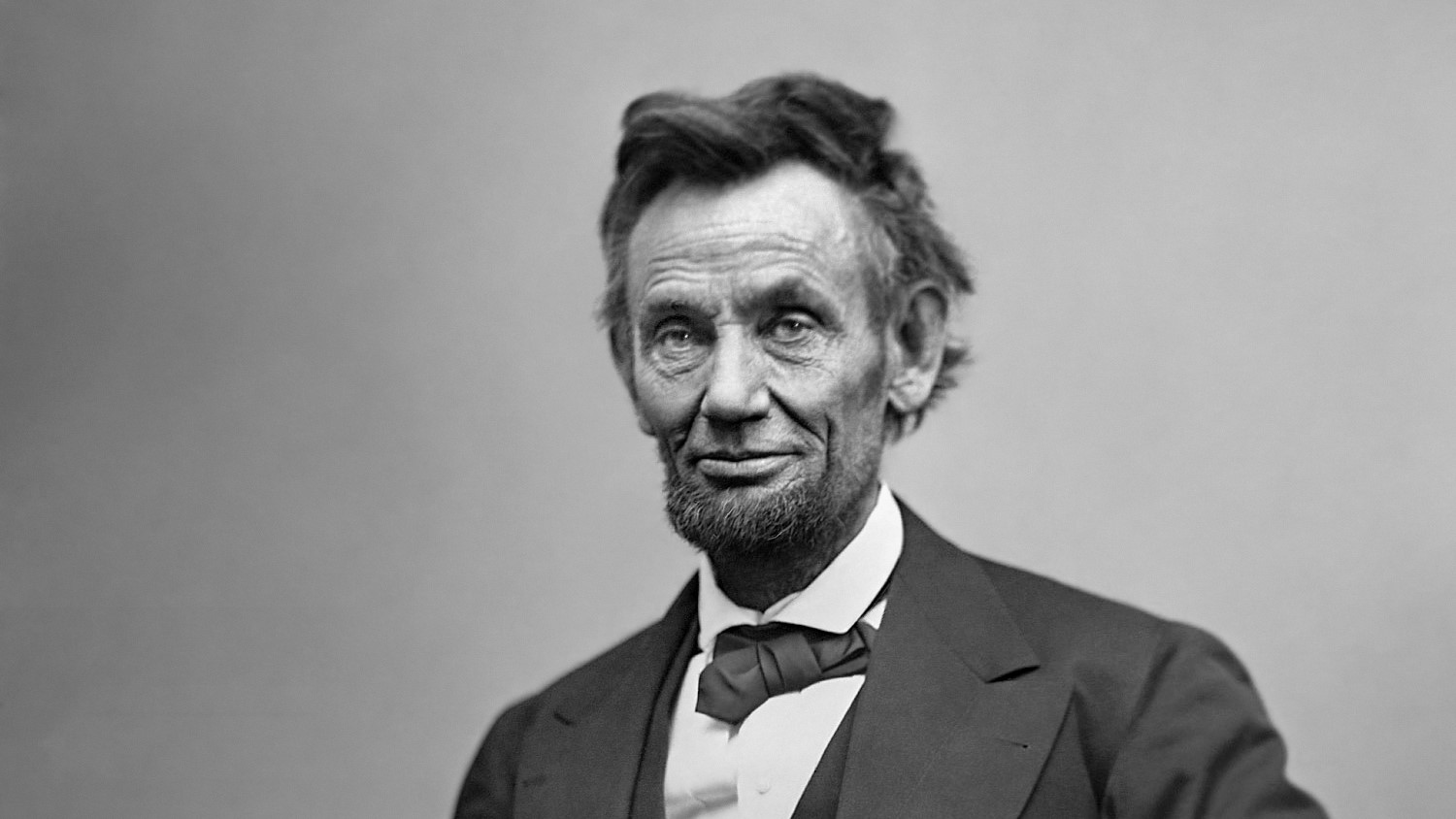 This week’s Torah reading describes in great detail the first and only “state funeral” in the Bible. It depicts Jacob’s death in Egypt and his final journey to be buried in the Cave of the Patriarchs in Hebron.

Although nowadays Jewish custom favors a burial in plain shrouds as soon after death as possible, Jacob’s funeral was the opposite of that.

The patriarch passed away peacefully aged 147, surrounded by all his children. Then his body was embalmed and lay in state in Egypt for 40 days while the Egyptians mourned him. Then his body was transported to the border of Canaan, accompanied by a military cortege and all the dignitaries of Egypt. Genesis chapter 50 then describes how the entire entourage was joined by the Canaanite people in a place named Goren Haatad for a further seven days. The site was renamed Evel Mitzrayim (Mourning of Egypt) to commemorate the event.

Although the Bible says that this was “on the other side of the Jordan” it seems unlikely that Jacob’s funeral procession made such a wide detour. Aaron Demsky (along with other scholars) explains it is more likely that Jacob’s final journey followed the Way of Horus, which was the main route from Egypt to Canaan. It is probably that Goren Haatad was a small village that was later destroyed during a Muslim battle with local Christians on February 4, 634 CE (described in Latin in Anecdota Syriaca p. 116). 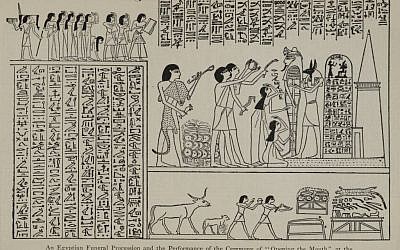 Only after the weeks-long public mourning by the Egyptians and the Canaanites did Jacob’s children bury his body in the Cave of the Patriarchs, alongside Abraham and Sarah, Issac and Rebecca, and Jacob’s first wife Leah.

Yes, there were perhaps bigger funerals in Jewish history — when Miriam and Aharon died in the desert they were mourned by the entire camp of 600,000 military-aged men, as well as the women and children. But nobody else in the Bible was mourned publicly by all the surrounding non-Jewish nations.

The people came to mourn Jacob, but the entire event was arranged and coordinated by his son Joseph, who was still the second-in-command in Egypt at the time.

It must have been so painful for Joseph to arrange such a public and international burial for his father when Jacob was unable to give Rachel, Joseph’s mother, even the bare minimum of a funeral. Although she married Jacob after Leah, and thus was his second wife, she was also the patriarchs first love, and when she predeceased her sister maybe Joseph had hoped that she would be buried in the Cave of the Patriarchs so she could remain alongside her husband in death.

But instead, Jacob apologized to his son, saying that he could not even bring Rachel’s body to the city but buried her at the roadside (Genesis 48:7).

When I came from Paddan, Rachel died on me in the land of Canaan along the way, some distance away from Ephrat; and I buried her there on the way to Ephrat, which is Bethlehem.

Despite, or perhaps because of, the ignoble burial Jacob gave Rachel, Joseph swore to his father that he would carry him to Israel for burial with his fathers. And he gave Jacob the most elaborate public and international funeral recorded anywhere in the Torah.

But why did Joseph give his father a state funeral?

George Bush planned to make his final journey by train, perhaps as a reminder of how as a child, he rode the rails with his family, sleeping in on the train. Or perhaps he wanted to remind the country of an earlier age, when the only way to cross the country was by locomotive. 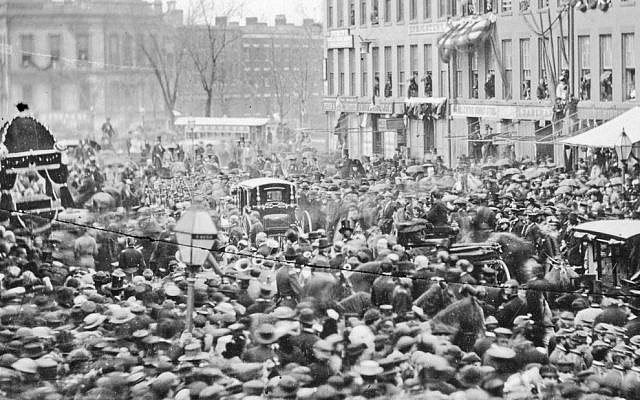 Why did Lincoln’s family and advisers decided to hold a very public funeral for him? Perhaps it was so that the nation, shocked by his assassination, could mourn for him publicly. Or perhaps it was a show of defiance against those who opposed his views on emancipation.

But why did Joseph give his father such an elaborate funeral? Jacob simply requested that he be buried in Hebron.

Perhaps it had to be done so that the Egyptians would continue to respect him and his family. During the New Kingdom period ancestor worship and honoring one’s deceased parents was not only important, but the Egyptians believed that if the family treated their deceased with respect, the dead would be able to continue to have an influence over the affairs of the living. Maybe the Egyptians insisted on a drawn-out, public funeral for their leader’s father, to ensure that the Patriarch would continue to protect his ruling son and the entire nation.

Or perhaps Joseph was preparing for the long exile of the fledgling Israelite nation. God had promised that Abraham’s descendants would be strangers in a strange land for hundreds of years. Maybe Joseph planned the elaborate funeral and procession to Israel so that even in the darkest depths of enslavement, Jacob’s children could look back and remember a time when their father was so important to their oppressors.

Or maybe Joseph wanted them to always remember that they were in exile, and that their ultimate destination was the land of Canaan. Jacob’s funeral would have remained as part of the narrative of the Egyptians and Canaanites for a long time, acting as a constant reminder to all that Jacob’s children ultimately belonged in the land of Israel.

Perhaps this is another meaning of the talmudic concept that Jacob never died:

Rav Yitzhak said, “Rabbi Yochanan said, ‘Jacob our father didn’t die.'” [Rav Nahman] said to him, “Was it for nothing that they eulogized him, embalmed him and buried him?” [Rav Yitzhak] said to him, “I derived it from a verse… Just as his descendants are alive, so he too is alive.”

Maybe Jacob remains alive for his descendants as a constant reminder that once upon a time he and his family were respected by all the surrounding nations. And that eventually his children will follow his path, leave their exile and return to the holy land.