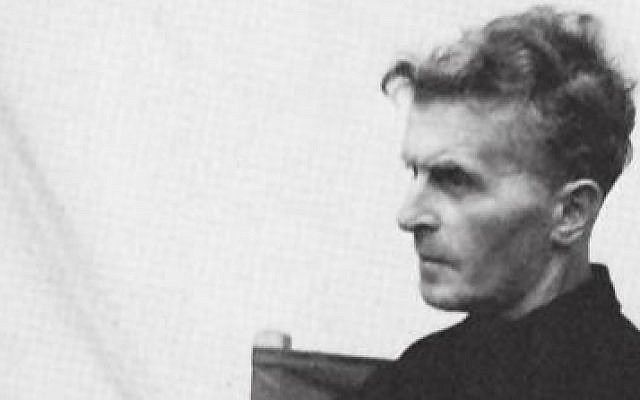 One of the last photographs taken of Wittgenstein, in the garden at the von Wrights’ home in Cambridge. (Public Domain, Knut Erik Tranøy/ Wikimedia Commons)

In so many ways they seemed so similar, Ludwig Wittgenstein and Karl Popper. Born only 13 years apart, both were Austrian who grew up in the fin de siecle twilight of the Austrian-Hungarian empire. Both were of Jewish ancestry, whose families had converted to Christianity. Both had suffered during World War I and both had been affected by Hitler and the Holocaust. Both loved music, both had worked as teachers. And they were two of the greatest philosophers of the 20th century.

Yet at the same time they were both so different – irreconcilably so.

Popper had grown up in an upper middle-class family in the heart of Vienna. Although all his grandparents were Jewish, the family converted to Lutheranism before he was born and he was baptized as a child. Karl Popper explained, “After much thought my father had decided that living in an overwhelmingly Christian society imposed the obligation to give as little offence as possible — to become assimilated.”

His father was a lawyer who amassed a personal library of some 14,000 books, which Karl eventually inherited.

Popper earned his doctorate in psychology, taught at both elementary and secondary schools, and was apprenticed to a cabinet maker for a time. But he spent his spare time writing his first philosophical work, The Two Fundamental Problems of the Theory of Knowledge. 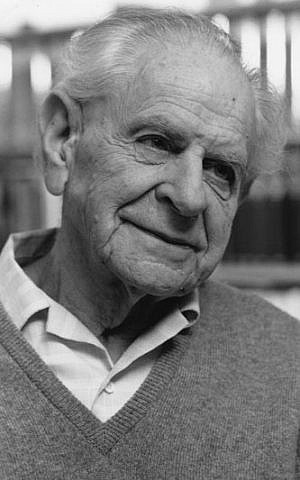 With the rise of Hitler he focused on leaving Europe. He eventually accepted a teaching position in Canterbury University in New Zealand, and spent the war years there with his wife Anna, who he had married in 1930. In 1945 he published his response to Nazism — The Open Society and Its Enemies. Neither he nor Anna were happy in New Zealand, and in 1946 they were finally able to move to London, where Popper was appointed professor at London School of Economics. In 1959, he published his best-known book, the pioneering work, The Logic of Scientific Discovery.

From his retirement in 1969 until his death in 1994 he was active as a writer, broadcaster and lecturer. His idea of falsifiability remains to this day an important part of the philosophy of science.

However, he was never part of the Vienna Circle, a philosophical group gathered around Wittgenstein, which met in the coffee-houses and wealthy homes in Austria’s capital, and which shaped philosophical thought for the first half of the twentieth century. Although Popper and Wittegenstein and their families moved in intersecting social circles it seems that the two only ever met one time, which we’ll get to shortly.

Although Popper came from a well-to-do family, Wittgentstein’s family had such serious money that they were one of the richest families in Europe and were virtually considered nobility. His father, Karl, built Palais Wittgenstein in the heart of fashionable Vienna, where he would hold concerts and events for the entire city. To give an idea of the scale of their wealth, the home contained seven grand pianos. 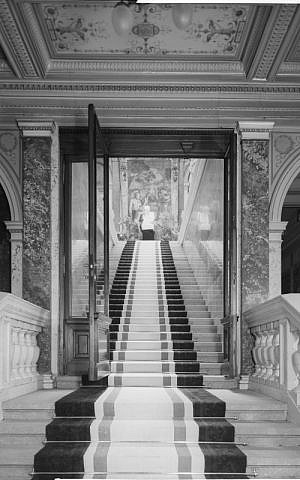 However, as the Nazis would later argue, the Wittgensteins were never truly part of Austrian society. Wittgenstein’s great-great-grandfather, Moses Meier, was Jewish, and only took the name Wittgenstein following Napoleon’s edict requiring even Jews to have last names. However, by the time Ludwig was born, the family had tried to shed its Jewish connection, and he was baptized as a Catholic.

Ludwig Wittgenstein was the youngest of nine children. Despite their phenomenal wealth, his life was not a happy one. Their father was a harsh perfectionist and Three of his brothers committed suicide and Ludwig also considered killing himself, writing, “I ought to have… become a star in the sky. Instead of which I have remained stuck on earth.”

Instead, he signed up for the trenches of World War I, despite being eligible for a medical exemption. While fighting in the Austrian-Hungarian army he wrote his only work of philosophy, the slim 75-page Tractatus Logico-Philosophicus.

Before the war, Wittgenstein had studied aeronautics in Manchester University, where he designed and built a plane, and worked unsuccessfully on making a jet engine. His failure led him to abandon aeronautics, instead taking up mathematics after reading Bertrand Russell’s The Principles of Mathematics. He moved to Cambridge University to study under Russell, who was perhaps the greatest philosopher in the world at that time. Within three months, Russell wrote of his new pupil, “I love him & feel he will solve the problems I am too old to solve … He is the young man one hopes for.”

After World War I, Wittgenstein gained a teaching degree, left the wealth of his family home and went to teach in small, rural villages. The incongruity of the multi-millionaire teaching in a small village schoolhouse was not lost on those who knew him. Within a couple of years Wittgenstein was bored of this life and returned to Vienna.

The Vienna Circle had formed by this time, based on the philosophy they had read in Tractatus. Although Wittgenstein was never officially a member of the group he was hugely influential on it. During this time he began developing an entirely different philosophical approach which was published posthumously as Philosophical Investigations. In it, he argued that all philosophical problems were merely linguistic issues. 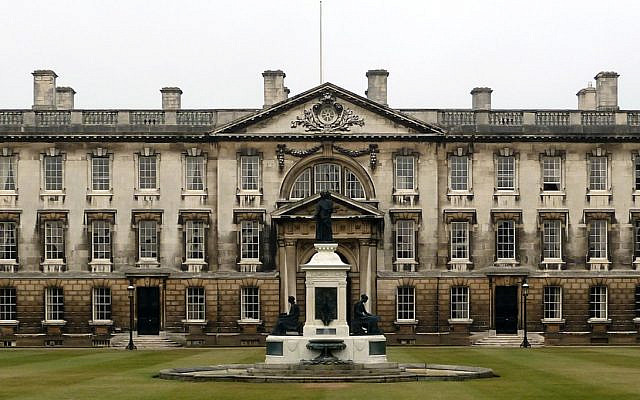 In 1929, Wittgenstein accepted a professorship at Cambridge. The famous economist John Maynard Keynes wrote about the philosopher’s arrival, “Well, God has arrived. I met him on the 5.15 train.”

Although he was often miserable at Cambridge, Hitler’s rise to power meant Wittgenstein could not return to Europe. His sole surviving brother Paul, a concert pianist despite losing an arm in World War I, had fled to America. Ludwig used his family’s wealth to get Hitler personally to sign the necessary papers for his sisters to be safe from being deported by the Nazis.

Wittgenstein remained at Cambridge until 1947 when he resigned his professorship to concentrate on completing his book. However, in 1951, aged 62, he passed away in London while still working on the final manuscript.

Let’s go back to Friday, October 25 1946, when Popper was invited to address the Cambridge Moral Science Club. Popper had followed Wittgenstein’s success throughout the decades and presumably had often contrasted it with his own exile to New Zealand and his only recent return to serious philosophical society. 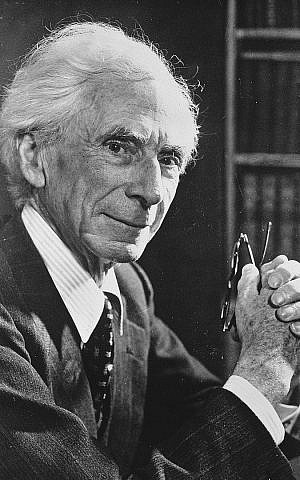 There were only 30 people there that night, including Russell. But the only thing that mattered to Popper was that Wittgenstein would be there. This was to be the one and only time the two men met.

Perhaps still smarting from never being invited to join the Vienna Circle, Popper chose to confront Wittgenstein’s theory that all philosophical problems are merely linguistic puzzles directly. The title of his talk was “Are There Philosophical Problems?”

Popper began his talk in room H3 in the Gibbs Building at King’s College at 830 pm. Nobody agrees exactly what happened there, but Popper wrote in his autobiography, Unended Quest that Wittgenstein had been nervously handling a poker as Popper presented a series of what he insisted were real philosophical problems, which Wittgenstein rejected one after another. After about 10 minutes Popper turned to ethics, and Wittgenstein interjected, challenging him to give an example of a moral rule. Popper wrote:

I replied: ‘Not to threaten visiting lecturers with pokers! Whereupon Wittgenstein, in a rage, threw the poker down and stormed out of the room, banging the door behind him.

Whether or not this account is entirely accurate is the subject dealt with in the book Wittgenstein’s Poker. But it is certainly true that this 10-minute encounter came to define both great philosophers to a certain extent.

Decades of Popper harboring intellectual and emotional enmity against Wittgenstein ended with a brief face-to-face encounter. And then Popper returned to London and Wittgenstein went back to his puzzles.

This encounter between two of the greatest 20th-century philosophers reminds me of the meeting between Jacob and Esau, described at the beginning of this week’s Torah reading, Vayishlach. 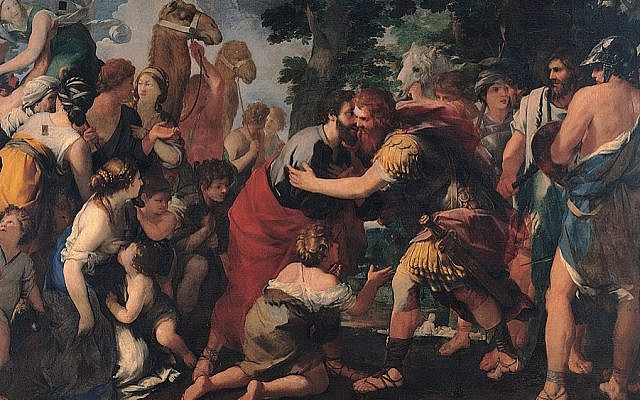 Jacob had fled his parents’ home 20 years earlier, thinking his brother wanted to murder him. He had spent two decades working day and night for an impossible employer who constantly sought to cheat him. In the heat of the summer days and the freezing cold of the winter night Jacob always had one thing at the back of his mind — when would he face Esau and settle things once and for all.

Now, as he headed back to the land of Israel, he had no idea what to expect as he prepared for the meeting. Would this be a battle, he thought, as he prepared his weapons and moved his family to a safe location. Or perhaps Esau had forgiven him already for stealing the birthright — maybe the extravagant gifts Jacob sent would appease his brother and lead to the two making peace. Or maybe this was something totally beyond his control, he thought as he prayed to God.

In the event, there are conflicting versions of what Esau intended. The Torah describes the encounter as friendly, Esau greeting his brother with a big kiss. Yet the rabbis tell us that Esau had intended to bite his younger brother and kill him. Similarly, had Esau brought 400 armed men with him to attack and kill Jacob, or to be an honor guard to welcome him?

Whatever the reality of the encounter, it was all over in a matter of minutes. Decades of worry, stress and preparation ended with Esau’s invitation for his brother to accompany him on his journey and Jacob’s refusal.

The two met only once again — at their father’s funeral. And that was it. Though according to the rabbis, the enmity between Esau and Jacob continues through their descendants to the present time.

In our own lives, we often carry with us the stressful burdens of grudges or fears that can sometimes become paralyzing. And sometimes if we confront those fears or deal with the grudges we can resolve the matter on the spot.

“What would the world come to if people kept carrying grudges against all reason?” said The Godfather, Don Vito Corleone hypocritically, as he planned his continued revenge against the Tattaglia family.

But the truth is that sometimes grudges or fears melt away when confronted, or alternatively are over disappointingly quickly without resolution.

For the narrative of Jewish history it is thematically important to remember Jacob’s encounter with Esau. But in our personal lives we can perhaps accomplish more by simply letting go of the grudge or fear of revenge and moving on without needing the confrontation or existential angst.