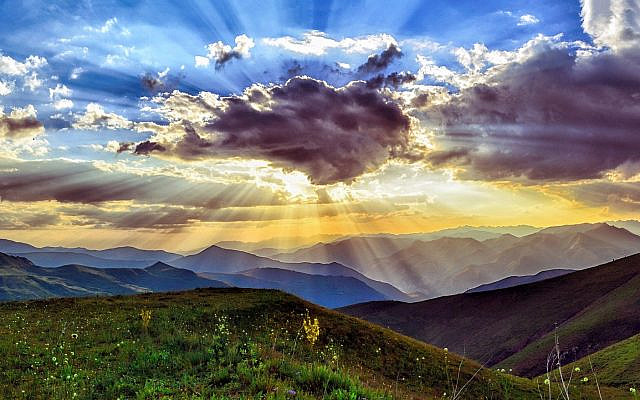 The idea that humans can yearn for a connection to Hashem is not something that sounds so foreign to us. People long to connect to something beyond themselves, something that fills their lives with meaning and purpose. However, what would we say if this desire for connection was not exclusively by humans, rather it could also be held by every creation in existence? According to the Chalban, a kabbalist who lived in Israel, that actually is the case.

“The rock and all of creation yearn for Hashem, but they are still,” he writes in “Talelei Chaim” (Tefillah, p. 51). At first glance, the Chalban says, this may seem like an esoteric idea that is completely divorced from reality and when we look at rocks — or anything in the world — we will simply see it as a lifeless object, nothing more and nothing less. But this is flawed. In truth, the Chalban teaches, everything in the world contains a spark of godliness within it, which is seeking to reunite with its ultimate Source: Hashem. In the human experience, this can be seen in the desire to conquer, succeed, build, and reach new heights — all of this is a desire for Hashem, and the entire world shares that “instinct.”

One practical way of seeing this deep concept with nature can be found in Parshiyot Behar-Bechukotai with shemittah (sabbatical year). Hashem tells Moshe, “Speak to Bnei Yisrael and say to them: When you enter the land that I assign to you, the land shall observe a sabbath of YHVH” (Vayikra 25:2). For six years, Bnei Yisrael will work the land, and on the seventh, they will leave the land to rest, similar to the weekly cycle that concludes with Shabbat.

The Kedushat Levi makes that comparison and explains that just as Shabbat is not meant for our rest, so, too, shemittah is not simply about rest. In both cases, he says, the rest is followed because it’s Hashem’s will. Shabbat contextualizes our week through reflection and connection to ourselves and Hashem, so, perhaps, shemittah channels something similar for us.

The Rambam writes in Mishneh Torah that, “It’s a positive commandment to rest from working the land and caring for trees in the shemittah year” (Sabbatical Year and the Jubilee 1:1). During this year-long period, there are no humans who tend to the land — no plowing, harvesting, or anything of the like. The fields are left to survive in their natural state without the slightest hint of human control or involvement.

There is a famous midrash that can frame this in a completely new light. In Bereishis Rabbah, Rabbi Simon says that every blade of grass has an angel that hits it and says to it, “Grow!”  (10:6). His statement is not limited to blades of grass, rather Rabbi Simon is emphasizing that even the seemingly insignificant parts of nature are still being divinely guided with care and attention from Hashem. This suggests that, during the shemittah year, the fields experience their own version of Shabbat; instead of following the “orders” of the farmers and their assigned angels, during the shemittah year, the fields purely follow Hashem’s will through their angels.

The Chalban’s teaching shows us that we, and nature, are in constant dialogue with Hashem. He explains that it is up to humans to elevate the divine sparks within themselves and all of existence, to slowly illuminate Hashem’s light in every aspect of existence. Every flower, rock, stream, animal, and person is yearning for Hashem — all of nature is calling out to Hashem. The question is whether or not we are listening. If so, what are we going to do about it?