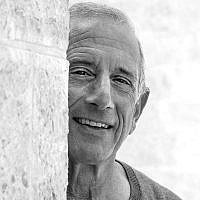 On Passover eve, the festival of freedom, Israel killed 16 young Palestinians in Gaza. 750 more were wounded by 100 snipers who were brought in to do the job. They lay on high walls of earth and opened fire, selecting their targets. There was no battle. It was like shooting ducks at an amusement park. Here in Jerusalem, across the political spectrum, any murmur of protest is denounced as a form of treason. No one in authority even feels pressed to justify the use of live rounds against a passionate but essentially non-violent demonstration that took place on the other side of the fence.

Israel closed the borders of Gaza in 2007. Unemployment in blockaded Gaza is 44%, among young adults, 58%. There are four hours of electricity each day. Southern Israeli beaches regularly close because of the raw sewage that pours across Gaza beaches and washes up the coast. No one enters the sea in Gaza. Drones fly overhead, and any provocation from Gaza is answered by artillery or tank fire into the Strip. Life there is intolerable, by any measure.

The government and army could not do this without popular support. The support of people, my neighbors, the folks I met in the supermarket today. My people, the Jewish people living in Israel, seventy years after ending 2,000 years of exile and building our state. What would it take for Israelis to remember their families’ history as holocaust survivors, or as North African refugees who fled with nothing, homeless and frightened? To remember in such a way as to know that we Israelis must not do to others what has been done to us…. What would it take?

While shattered by the images from Gaza, I am no less worried about what is becoming of us. Who are we, to continue going to war after useless war, to support a deeply corrupt prime minister, to serve in the reserves, policing the territories, perpetrating and allowing and condoning brutal norms and policies? Who have we become?

My explanation, for the fact that Netanyahu’s Likud party has suffered no loss of support in the polls, is this:  Netanyahu models a set of values that today are owned by increasing numbers of Israelis. He is their hero. Not because of his achievements, but because he is dark, clever and elusive, heartless and aggressive, disloyal except to his family and friends. And these values adorn the banner of many Israelis today.

This country is nothing if not surprising…..Two days after the Passover massacre, the Netanyahu government found it expedient to reverse its months-long insistence on driving 30,000 African refugees out of Israel. The victory belongs to the thousands of Israelis who marched and protested and wrote petitions and who ran expensive ads in the papers. Why this? Why now? An act of humanism or generosity this was not. Go figure.

The Gaza Palestinians, like the Vietnamese 40 years ago, have nothing to lose. Their resistance will continue, things may escalate, and we could find ourselves in yet another Gaza war. The opposition is in shambles, and even Meretz, the party I have supported, is burst asunder days after primaries, as the newly elected chairwoman is exposed, consulting with one of the most Machiavellian, left-hating PR men in the country and then lying about it. The left needed this?

Always in search of an up-beat finish, I scrape and scratch and find no purchase. But perhaps the triumph of the African refugees will give us the special lift that comes when you can see the link between the march you joined in Jerusalem a month ago and the result this evening. Direct action sometimes does work. We will now have to find a way to garner that same massive power in order to confront this 51 year occupation. For those of us who still love this country, there is no alternative.

As we celebrate Passover, and as we think of Gaza, let us remember that in the Talmud, God’s reaction to the Israelites’ celebrating the deaths of the Egyptian soldiers as the Red Sea closes over them: “How can you sing as the works of my hand are drowning in the sea?” Hard-heartedness has never gone over well in heaven.

Yoav Peck is Director of the Sulha Peace Project, bringing Israelis and Palestinians together for person-to-person contact