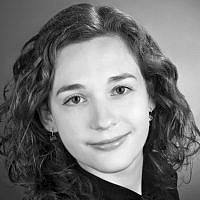 The Blogs
Nadine Grzeszick
Apply for a Blog
Please note that the posts on The Blogs are contributed by third parties. The opinions, facts and any media content in them are presented solely by the authors, and neither The Times of Israel nor its partners assume any responsibility for them. Please contact us in case of abuse. In case of abuse,
Report this post.

Passover is the most beautiful holiday to me. Like no other Chag, it symbolizes the essence of being Jewish. Sitting at a table surrounded by the ones we love, we tell a story that creates a magical link between us and our ancestors. The lines between narrative and reality start to blur when we imitate their historical actions. Just like our ancestors, who left their homes in haste, we eat unleavened bread on Passover. Avadim hayinu, we were the slaves, the ones fleeing the Pharaoh, crossing the Red Sea, and wandering through the desert. The exodus from Egypt was the event that turned the Jewish people into a nation, and till today, it remains the day to reaffirm our continuity and union as a people.

But Passover is also the bitterest holiday to me. What ails me is not that my ancestors were slaved but rather that they weren’t. I’m a giyoret, a convert. I have no idea what my ancestors did around 2450 BC, but probably they didn’t hang out in Egypt. I’ve gotten used to this in general. In fact, I spent the last ten years of my life developing a connection to a foreign people, and considering that I’ve started a blog on this website, it seems that my enterprise has been successful in some way. But there’s one thing in life that all the sages’ learning can’t buy you: a Jewish family.

A few days ago my friend Lea from Heidelberg called me. “Nadine, I’m going to Israel,” she shouted happily. I was unimpressed and replied in a cool voice, “How nice, I was there only two weeks ago. What are you going to do there?” “I’m going there for Pesach. My parents will join me and we’ll stay with some relatives.” Of course, how could I be so dumb? Visiting their families around the globe – that’s what Jews do on Passover, isn’t it? Jews by birth, that is. The ones with families.

Today I got an email from Chabad. “How do you say ‘no’ to a widow and orphan before the Seder?” they asked their readers. Suddenly I realized that they were actually talking about me. From a Jewish point of view, I’m an orphan. My giyur letter makes this perfectly clear by replacing the Polish name I’ve inherited from my father with “bat Avraham Avinu.” This is how I learnt that I had been adopted by a man called Abraham.

It’s weird to speak about adoption when your parents are unquestionably alive. But here’s the thing: Instead of turning the house upside down because she’s looking for the last surviving bread crumb, my mom tries to find the perfect hiding places for Easter eggs. I love my parents very much and I feel close to them. But I’ve stepped into a new world, which they are no part of, and that leaves me alone.

Judaism is not a religion for hermits, though. The entire culture is built on the idea that there’s that enormous amount of teachings, beliefs, and traditions that has to be transmitted from one generation to the next. Celebrating Shabbat alone in your room simply doesn’t work. One of my friends, who has converted to Orthodox Judaism like myself, admitted to me that being lonely on Shabbat made him eventually switch on the TV. If this is what an average Shabbes does to poor convert, what is bound to happen on the ultimate mishpoke holiday? Anyone got a gun for me?

Here’s what will happen: I’ve bought tickets for the two seder meals at the local Jewish community. It’s an Orthodox synagogue, but as common in Germany, only the rabbi and maybe five other families are religious. The rest is made up of ancient Russians, who go to the Seder because they’ve been promised a lavish meal with their all-time-favorite dishes like chicken soup, beet salad, and – most importantly – alcohol. Much alcohol, this time. I’ll take a seat among that illustrious group of people forty years my senior. Then I’ll give my whole attention to the vegetarian dishes for about three hours while the others happily chat in Russian and ignore me. I’ll stay till we’re done with the Seder, walk home, and cry.

To calm myself, I’ll think of the following scene:

When I lived in New York, I once spent the Seder with a conservative rabbi and his family. There were altogether fourteen of us, among them the four sons of the rabbi. Each of us had been handed a discussion sheet with questions that was to guide us through the evening. I felt like we covered all questions humanity ever had to cope with that day. We kept on arguing for hours. The boys, especially the eight-year-old one, amazed me with their sharp-witted answers. At the end of the night, I was enchanted: This is what being Jewish is all about: Meeting your family, talking, praying, talking, performing the rituals, talking, eating. And talking. It was the perfect mixture of being joyous and doing something extremely meaningful that transcends your own existence.

I pray and hope that one day I’ll be able to experience something like this in my own home – with one tiny exception: I’d cut down on the number of kids.

About the Author
Nadine Grzeszick was born in a small German town in 1987. Over the last 10 years, she has been struggling with the question of how to reconcile her Jewish identity with living in Germany. Her blog explores the difficult as well as the hilarious sides of Jewish life in her native country. Nadine is a journalist, who has recently graduated in English literature.
Related Topics
Related Posts
Comments