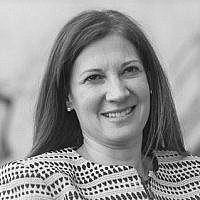 The Blogs
Sharon G. Forman
Apply for a Blog
Advertisement
Please note that the posts on The Blogs are contributed by third parties. The opinions, facts and any media content in them are presented solely by the authors, and neither The Times of Israel nor its partners assume any responsibility for them. Please contact us in case of abuse. In case of abuse,
Report this post.

I was seven years-old and sat at Jean and Jerry’s overflowing seder table in Virginia Beach. A coiled telephone cord stretched from the land line in the kitchen wall through the door to the dining room over the chandelier, dangling the phone receiver over the table like a strange serpent. My mother’s voice, slightly altered by the phone transmission, chanted “Avadim Hayinu” – Once we were slaves to Pharaoh in Mitzrayim, but now we are free. I remember taking home a silver dollar reward for finding the afikomen and a place card with my name on it in Jean’s elegant and swirling calligraphy.

Did I imagine these details? Memories from that springtime linger in crevices of my mind, like matzah crumbs trapped in the binding of old haggadahs. My mom, stricken with hepatitis, was quarantined in a hospital room. The four children in our family could not visit her. Life was topsy turvy, filled with kindnesses from both friends and unexpected helpers. I remember that uneasy feeling, the worry, and the easy tears. Then the memories become blurry. My mom returned home. My dad could stop feeding us pizzas and ice cream sodas with extra chocolate syrup. Life resumed its expected patterns.

Four and a half decades later, these memories rush to my mind, as I contemplate creating Passover for my own family during the coronavirus pandemic. Perhaps my children will be like me and remember this year’s attempt at a seder with crystal clarity. All of those previous seders in which the compiling of shopping lists and preparing apple walnut matzah kugels started weeks before Passover will be just hazy recollections for my children. Yet, this seder, celebrated in this emotionally heightened time of isolation with just our immediate family, has the potential to become imprinted in their memories for a lifetime.

How do we create a seder in this time of social distance? How do we honor generations-long traditions that have become precious to our families? How do we mark time in this amorphous spring during which I am tempted to post each new date on my kitchen cabinet mimicking the whiteboard in hospital rooms in which days blend together? “Is it March 45th?” a friend posted on Facebook. Yes. Yes, it is. But soon it will also be the full moon of the month of Nisan, and seder will arrive. We have a chance to drag some sense of familiarity, order, custom and predictability into our homes and shake our Purell coated fists at this virus and hold up a piece of matzah, a sprig of parsley, and a horseradish root (if we can hunt them down) and tell an ancient story that can inspire us to treasure freedom and optimism.

This was the year we were supposed to have two grandmothers as guests for seder, friends, and neighbors, maybe even a college pal from California who had never attended this ritual meal, but had it on his bucket list. We mourn these disappointments along with the brimming basket of losses- some small, some momentous. If we are healthy, we can pull ourselves together, and try to create something ad hoc, beautiful, and different. If we have to use lemon juice from a plastic container as a substitute for bitter herbs, so be it. If our homespun seder plate does not resemble our cousin’s museum worthy version, that’s okay, too. Search online, and you can find recommendations for holding a seder during this time of plague and isolation. Educators have compiled how-to lists for preparing celebratory foods, making substitutions for difficult to find items (not just paper towels), and suggestions for utilizing Zoom and Facetime to bring people together. If you have to choose one part of seder, however, that can continue to bring us hope during this strange spring I would cling to the symbol of Kos Eliahu, the Cup of Elijah. For many of us, Elijah may be our only guest.

Jewish tradition explains that rabbis argued over the number of cups of wine required for the Passover seder, which correlated to the number of Biblical promises of redemption in Exodus Chapter 6. Some rabbis clearly noted four explicit promises, while others included a fifth exhortation pledging deliverance for the Israelites. Four or five cups, what should it be? The number four won, of course, but as a compromise, a fifth cup of wine with Elijah’s name on it appears at the seder. After all, he’s the prophet who is supposed to solve all arguments and usher in a time of peace and messianic redemption. Of all of the beautiful, lofty, and obscure symbols that decorate our Passover tables, I think we could all use some of Elijah’s magic this year.

Elijah appears in the Bible’s First Book of Kings where we learn of his stern warnings to corrupt political leaders, his exile, his assorted miracles, and his showdown against almost a thousand idolatrous prophets. In rabbinic literature, Elijah is a shapeshifter, a master of disguise, a miracle worker. When a person is kind to Elijah dressed as a beggar, goodness follows. Elijah never dies in the Bible. He rises to heaven in a whirlwind and is said to return to earth to be with us at circumcisions (and baby namings), the end of Shabbat at the ceremony of Havdalah, and of course, the Passover seder, where he slips in wearing his invisible cloak to visit Jewish families and drops by for a sip of wine.

This year, in addition to an Elijah’s Cup, we could add another cup to represent all of the guests who are absent from our seder. I propose taking a cue from the 19th century Rabbi Naftali of Ropschitz who used to fill Elijah’s cup with drops from every guest’s own drink, symbolizing that redemption could only arrive when every soul added her or his special gift to the community. Pair Elijah’s cup with another goblet, and pass it around your Passover table. Have each member of your group add a drop of grape juice or wine or whatever you are drinking to the cup and mention someone you wish were at the seder and describe what their gifts are and how you would like to bring those gifts to the world.

When we open the door at last to welcome Elijah, we can breathe in clear air, wave at neighbors from a safe distance, and remind ourselves that better days can follow. In Jewish tradition, Elijah brings good news, and we could all use some of that right now.

About the Author
Rabbi Sharon G. Forman has published "Honest Answers to Your Child’s Jewish Questions" (URJ Press), a chapter on the connection between Judaism and breastfeeding in Lisa Grushcow’s "The Sacred Encounter" (CCAR Press) and, most recently, "The Baseball Haggadah: A Festival of Freedom and Springtime in 15 Innings." She has served as the director of education at New York City’s Temple Shaaray Tefila and currently teaches bar and bat mitzvah students at Westchester Reform Temple.
Related Topics
Related Posts
Sharon G. Forman
Comments