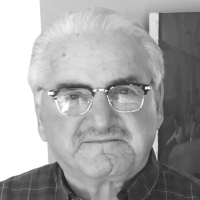 The Blogs
Basil Porter
Apply for a Blog
Advertisement
Please note that the posts on The Blogs are contributed by third parties. The opinions, facts and any media content in them are presented solely by the authors, and neither The Times of Israel nor its partners assume any responsibility for them. Please contact us in case of abuse. In case of abuse,
Report this post.

The monotony continues. But it is actually time to reflect on monotony. So, I try to dissect the monotony. When was the last time that Noga and I ate three meals together, every single day? When was the last time that I opened my eyes in the morning, and realized there was nothing I HAD to do today? When was a time that everyone I knew was contending with the same monotony? We are all living lives without scheduled doctors’ appointments, meals in restaurants, or any kind of social gathering, i.e. two or more people socializing. Have we ever been made so aware that we are social animals? How many people, who I normally chat with once in three months, are now communicating every few days?

Varieties of social media are now center stage. WhatsApp, Zoom and Google occupy large portions of the day, offering welcome distractions from the continuous babble on television, while also providing a never-ending stream of humorous, scientific and many non-scientific anecdotes regarding the situation. I am not a mindfulness freak, but I think I am starting to be a little more conscious of, well, being. More aware of my body, my mind, my thoughts, my plans. Maybe there is something in the idea of eating more slowly and focusing on your food, savoring the time spent reading, talking or washing dishes. Home somehow seems more important than travelling to another exotic destination. The realization that the threat at the moment is not a nuclear warhead from Iran, but a sub-microscopic fraction of life which is everywhere and nowhere.

Maybe Pogo Possum was right – “We have met the enemy and he is us”. We ignored climate change, allowed animals to change habitats, allowed humans to eat animals not consumed before, failed to believe the scientists who were warning us ten years ago that another pandemic is on the way, and saw public health as an irritating footnote to health care. We have had the gall in this country to allow a religious extremist (I am scaling down from “fanatic”) to be the top of the health services hierarchy for the past ten years, with his major contribution being to subsidize dental care for young children. The health ministry has been the joke after every election, statistics regarding our shortage of doctors, nurses, ventilators and hospital beds pushed aside, while a decision to purchase another submarine for a few billion dollars is passed with a blink of an eyelid.

Passover seder takes place in three days’ time. A weird holiday, sharpening even further the feeling of “How can this be happening?”. We will sit, two, instead of twenty-two, reading the timeless story of Israel’s flight from Egypt. Nowhere in the whole world will families celebrate the holiday together in the same room. No pictures of long tables arranged in the lounge, sagging under the symbols of the holiday, succumbing slowly to the stains of horseradish and wine, as the ten plagues are chanted raucously. The tables will be smaller, seen only on Zoom or on i-phones. The landmarks which every small child remembers, the four questions, the plagues, dayenu, Elijah’s glass and the open door, the brief silence as mounds of food are consumed, finding the afekoman and Chag gadya, all will be downscaled and virtual. Will I have the courage to open the windows over our tiny balcony and sing our Lithuanian version of Echad mi yodea at the top of my voice as I usually do?

The seder will not be the same, perhaps signaling to us that the world will never be the same. Coronchik has taught us that we are beatable. Slow down, look around, appreciate simple food or the flowers blooming in the spring, or just being alive.

Chag sameach to all.