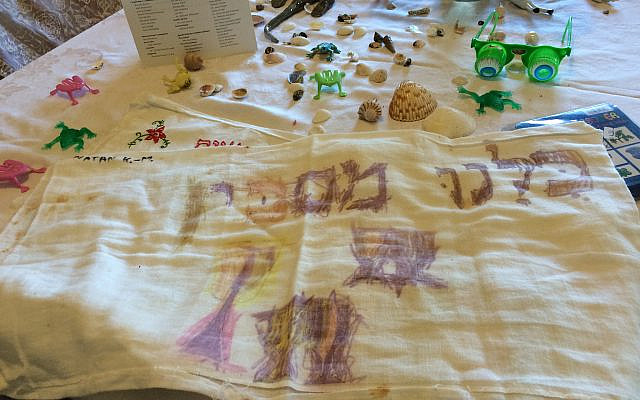 We are all at this table. (courtesy)

The famous “Four Questions” of the seder are actually not questions, but exclamations of bewilderment.

The Hebrew for the question, “How is this night different?” would be: “במה משתנה/שונה הלילה הזה”?

The actual wording in the haggadah, based on the Mishna (Pesahim, chapter 10), where the text first appears, is: “How different is this night!” Followed by three, actually, not four, exemplifications of the strange.

This year, we need no help pondering how very strange this time and this seder, are.

As the holiday nears, I am more in the mind of Sukkot than Pesah. The fragility of existence. The folly of thinking that our structures, whether physical or social; never mind, our jobs, our finances, are anything but vulnerable and ephemeral. The normal is now threatening, dangerous, quite possibly lethal. I just heard from a close friend that a guest at her daughter’s wedding, held a few weeks ago in New York, possibly the last that could be held in its originally scheduled venue, with its regular caterer and the booked band and florist, died of the corona virus, to which he was exposed at the wedding. He had made one of the blessings under the huppa. Friendship and love did not spare him. They are irrelevant in this scenario.

The virus has no will, no personality. It is utterly indifferent. It does not target; it does not spare. It just takes a tremp on our existence and, in favorable conditions, transmits and replicates. In this worldwide plague we are faced, suddenly, all of us, with the reality that, however meaningful and purposeful or just driven our lives may be to us, all that is nothing to Nature, to biology. Of course, we know that; we all confront that truth at one or another, or many times, in our lives. But this time, we are all confronting it simultaneously. All the billions of us. We are rightly humbled. And bewildered. Struck by how swiftly and utterly what was normal and common and assumed has become as foreign as bread during Passover. What, how is this? we wonder.

Sukkot and Passover, exactly six months apart, bifurcate the Jewish year. Both, each in its way, requires upheaval, akin to moving. Sukkot takes us out of our homes and into huts, into which we bring our tables and chairs, dishes, silverware, food, beds, for a week. Pesah is also upheaval, of the diet, of our normal dishes, silverware, of all that is familiar in our kitchens. There is something in Jewish tradition that abhors settled permanence; us getting inured to routine, to the illusion of control, and that mandates upending of any such assumptions, lest we confuse the routine  to which we become accustomed with anything other than the construct it is.

Rosh Hashana and Sukkot celebrate the universal: mortality, the fragility of existence that is the shared lot of humanity. The “seventy nations”—all of humanity, are bidden to partake of Sukkot; sacrifices for them were made in the Temple. Rosh Hashana is the “birthday of the world.” Passover, by contrast, is utterly particular. It is the celebration of the birth of Jewish peoplehood; through this experience, we became a people. The Passover sacrifice is only for members of the tribe.

But our shared predicament, not particularity, is our experience right now; our frantic search for what to learn from other countries, and they, from us; the shared race for treatment, for a vaccine. It is shared grief for the terrible, familiar, tragedies we are hearing from around the globe. Joy at good news from wherever it emanates, of people, in particular the elderly who, despite the odds, come out on the other side of corona; who have recovered, left hospitals, resumed their lives, however masked and bizarre they have become. We have reached across national lines, across lines of conflict, the enormity of the common threat trumping all else.

But in a few nights, the calendar brings us—Pesah. How do we relate to Pesah this year?

The corona crisis plunges us radically into the present, the suddenly imperative actions of the everyday: the handwashing and sanitizing, the gloves, the masks, the measuring of physical distance, the urgent creation of other means of maintaining relationships; the sudden mastery of computer technologies in order to see, hear, loved ones and stay “in touch,” physical touch having become life-threatening.

Passover however, is about past merging with present; it is about memory, that altered, mystical state in which we burst the bonds of temporality and, while in the present, are simultaneously in the past, and enjoined to convey it to the future, to our children. The biggest infraction of this holiday, of our national existence, is to say, “it happened to them, that was then and them.” It happened to us, we insist. If it had not happened, we would still be there. The normal boundaries of time cease.

So in its strange and seemingly counter-intuitive way, in this very moment, Pesah has profound meaning, grounding us in the repetition, the predictability, the timelessness of ancient ritual, the connection to generations innumerable, who, in whatever circumstances they faced, re-enacted these same rituals, proclaimed these same words. As will our progeny, we hope.

That is the stability we get. Intangible, yet as solid as anything we can attain.  Grounding in who we are, past infusing the present, reaching to the future.

The threat now is nothing like the destruction which threatened the Israelites in Egypt, or the threat of total extirpation that loomed over us a few decades ago. It is not an enemy of the kind to which we usually apply that term; this one has no ideology, intent, or plan. And yet, we will recite, as did all those others before us, ve’hi she’amda: that which arises to destroy us—all of us, whoever and wherever we are, and each of us, individually—will not, ultimately, succeed.

Which leads us to that other, ever so central assertion of Passover: va’yotsi’enu hashem elokenu misham, and God took us out of there with a mighty hand and an outstretched arm. What do we do with these lines on this Passover?

First, we recall others who have recited these words, despite themselves– the persons and the words– in situations far more dire than this. When irony, paradox, bitterness, reigned; with displacement, bewilderment, and grief more acute than now.

But second: I have always been struck by the words, in Exodus (14:9-13), when the Israelites, having fled Egypt, turned around to see the Egyptian army pursuing them; the sea before them and now, that army behind. They cried out to Moses bitterly, angrily, “Does Egypt lack graves, that you took us out to die in the desert?” To which Moses replied: “Fear not; stand and behold God’s salvation this day—because as you see Egypt this day, you shall not see them again:  God will fight your fight and you will do nothing” (my translation). To me, these verses have always said: this– that God fights for you and you do nothing—is a one-time event. From now on, it won’t be like this. You may call on God’s strength to bolster your own, but it’s on you.

As is the struggle against this virus. Never has anything been so perfectly clear than that what happens, how bad this gets, how soon it tapers off, when it ends, is entirely up to us. The virus may lack consciousness and intent but we are as imbued with those qualities as the virus is bereft of them. And that is what will get us to the other side of this.

In the meantime, we hold onto sacred memory, and memories, including of sedarim past; to those who passed on this sacred tradition, this anchor, to secure us in, yes, the ephemeral yet infinitely precious grounding of who we are, whatever is going on around us this moment.

A final point, about sadness this Pesah.

It is inevitable. Whatever arrangements we have made to make this seder at least tolerable—and kudos to Rabbi Sue Fendrick for encouraging us to permit ourselves, in her words, a “shvach” one this year—whatever we do will be tinged with sadness for the circumstances of the seder and of  the larger reality. But sadness is part of the seder. Throughout, we have opposing symbols and messages: the pillows on which to recline, the wine, the fine meal; and matsa, lehem oni, the bread of affliction; bitter herbs; salt water. My mother, z”l, who showed me when I was yet a young child how to prepare haroset (“kh’royses”) in her murdered family’s recipe, would caution me not to make it too sweet; to use walnuts and add ginger and cinnamon to the apples and sweet wine, because things were bitter.

Notice, when doing the hagaddah, that whenever we raise the cup of wine, the symbol of freedom and joy, we cover the matsot. And that when we uncover the matsot and focus on what they represent, we are not drinking wine. There is no effort to efface either sentiment, or to mix the two and “average out” the result. There is sadness; and there is joy, each with its space and truth.

About the Author
Shulamit S. Magnus Professor Emerita of Jewish Studies and History at Oberlin College. She is the author of four published books and numerous articles on Jewish modernity and the history of Jewish women, and winner of a National Jewish Book award and other prizes. Her new book, the first history of agunot and iggun across the map of Jewish history, with a critique of current policy on Jewish marital capitivity and proposals for fundamental change to end this abuse, is entitled, "Thinking Outside the Chains to Free Agunot and End Iggun." She is a founder of women's group prayer at the Kotel and first-named plaintiff on a case before the Supreme Court of Israel asking enforcement of Jewish women's already-recognized right to read Torah at the Kotel. She opposes the Kotel deal, which would criminalize women's group prayer at the Kotel and end the site's status as a "national holy site," awarding it instead, to the haredi establishment. Her opinions have been published in the Forward, Tablet, EJewish Philanthropy, Moment, the Times of Israel, and the Jerusalem Post.
Related Topics
Related Posts
Shulamit S. Magnus
Comments