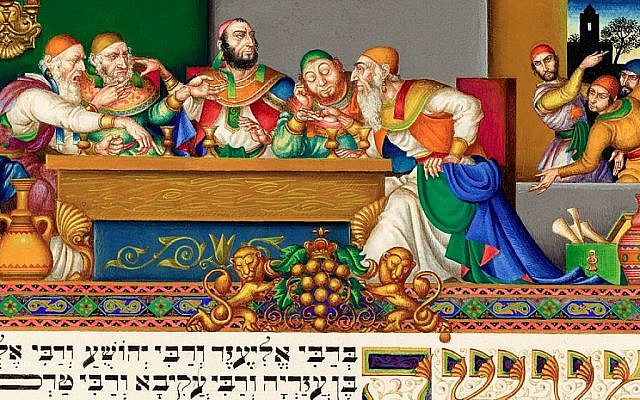 While still a teenager, I came to study in yeshiva in New York, as my family lived in Israel. Being without family during the most family-oriented holiday of the year—Passover—had its advantages and disadvantages. On the one hand, I had to scramble to find a place that would host me for the holiday. On the other hand, I got to spend the holiday with different people who graciously shared their family Seder with me. It was especially meaningful when I got to spend the holiday with some of American Jewry’s most distinguished and senior rabbis—Rabbi Aharon Schechter, Dean of the Rabbi Chaim Berlin Yeshiva, as well as Rabbi Shlomo Feivel Schustal, who served at the time as Dean of the Torah Temimah Yeshiva on Ocean Parkway in Brooklyn.

Spending Passover Seders taught me a great deal about reliving the Exodus from Egypt, warmth, hospitality, how loving and personable they were with their families, and what a true joy of Passover was all about. It also opened my eyes to better understand one of the most central stories of the Haggadah—one that seems to least belong in the Haggadah. Early on in the Magid section of the Haggadah, we say:

“It once happened that Rabbi Eliezer, Rabbi Joshua, Rabbi Elazar ben Azaria, Rabbi Akiva, and Rabbi Tarfon were reclining [for the Passover Seder] in Bnei Brak. They were telling the story of the Exodus from Egypt throughout that night until their students came and said to them: Our masters! The time has come to read the morning Shema!”

Rabbi Eleazar ben Azaryah said: “I am like a man of 70 years old, yet I did not succeed in proving that the exodus from Egypt must be mentioned at night-until Ben Zoma explained it: “It is said, `That you may remember the day you left Egypt all the days of your life;’ now `the days of your life’ refers to the days, [and the additional word] `all’ indicates the inclusion of the nights!”

This short yet seemingly out-of-place story captures the minds of rabbis and historians alike. The geographical and chronological proximity of this story to the Bar Kochva rebellion against the Romans, as well as the deposition of Rabbi Gamliel (see Brachot 27-28), leaves more room for questions and speculation than it does for answers.

Much has been written on what the rabbis were doing in Beni Brak, with that particular company, at that time. Weaving various aspects of the story, some commentaries contrast this passage with Rabbi Gamliel’s statement at the end of Magid, requiring us to say “Pesach, Matzah, U’Maror” to fulfill the Mitzvah of the night. Rabbi Gamiliel is focused on the recent destruction of the Temple and does not see a way to alter the way Passover has been observed in the time of the Beit Hamikdash; all we can do is reminisce about the way we observed Passover in the time of the Temple. Rabbi Akiva and those with him, however, did not see Passover as confined to observance during the times of the Temple; they saw discussion of the Exodus to its greatest detail as a new way of observing Passover. Yes, there was less of the sacrificial and Beit Hamikdash-related practice to it, but there was plenty of discussion of the Exodus.

This view is further supported by the Mishnaic source (Tosefta Pesachim 10:12), sharing that Rabbi Gamliel and his students would sit and discuss the laws of the Korban Pesach on the Seder night while Rabbi Akiva and his students would discuss the Exodus from Egypt. This almost identical story draws shocking similarities—and stark differences— to that of Rabbi Akiva:

In Lod, so very close to Rabbi Akiva’s Bnei Brak, sit Rabbi Gamiliel and his students and also stay up all night—discussing the laws of the Passover sacrifice, the Korban Pesach. While these two perspectives seem worlds apart—one focusing on the past, now destroyed Temple Service, while the other focuses on a new way to observe Passover—there is one thing they have in common: the bond with their students. Whether you are Rabbi Gamliel or Rabbi Akiva, one thing is essential: the closeness to students. Both rabbis had families and friends they could be with, yet they always were in close proximity to their students.

The story of Rabbi Akiva and his students gives us an additional reminder of the importance of teaching our story to another generation. We are told with regard to Passover: “And you shall tell your child on that day, saying, “Because of this, the Lord did [this] for me when I went out of Egypt.” (Exodus 13:8) A central element of Passover is teaching the story of Passover to the next generation. But is this limited to teaching one’s biological children? Moses Maimonides famously writes in his laws of studying Torah (1:2)

[Furthermore, this charge is not confined] to one’s children and grandchildren alone. Rather, it is a mitzvah for each and every wise man to teach all students, even though they are not his children, as [Deuteronomy 6:7] states: “And you shall teach them to your sons…” The oral tradition explains: “Your sons,” these are your students, for students are also called sons, as [II Kings 2:3] states: “And the sons of the prophets went forth.”

To the sages that are in every generation, the students are like children. Another powerful lesson embedded in the story of Rabbi Akiva and his students is the closeness between the rabbis and their students. It is this ability to teach the story of the Exodus from one generation to the next that is the secret of our survival. “You shall teach your children”, said about the Exodus, extended to students “your sons, those are your students,” is another secret of the survival of the Jewish people.

Reflecting on the rabbis and teachers who brought me into their home of their own family Passover Seder, with grace, kindness, and a welcoming spirit, I cannot help but be reminded of the Passover Seders Rabbi Akiva and Rabbi Gamliel and how they spent it with their students. The centrality of parents teaching their children, rabbis, and teachers inspiring their disciples, and telling the story of Passover in an intergenerational way, is the secret to the eternity of the Exodus from Egypt and us being a people.