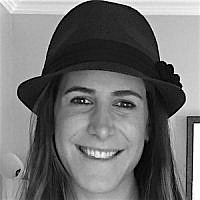 The Blogs
Jenna Shweitzer Maio
Apply for a Blog
Please note that the posts on The Blogs are contributed by third parties. The opinions, facts and any media content in them are presented solely by the authors, and neither The Times of Israel nor its partners assume any responsibility for them. Please contact us in case of abuse. In case of abuse,
Report this post.

As we light the Hanukkah candles, I think about how my life was transformed when I reconnected with my Jewish identity.  I also consider how much darkness must still be dispelled in order for so many other young Jews to uncover their “pintele yid,” the Divine spark that exists in every Jewish soul.

Rabbi Yitzchak Rotenberg, the first chief mentor of the Ger Hasidic dynasty, compares the Hanukkah miracle of the sealed jar of oil to the “pintele yid“: just as the jug of oil remained pure and untainted from Greek forces, there is also a part of our souls that will always remain pure, attached only to our heritage and individual missions and uninfluenced by our external environments.

Rabbi Rotenberg further explains that just as the Maccabees expended great effort to uncover the pure jug of oil, it also takes great effort for us to uncover our true potentials.

In many ways, modern society seeks to do the same thing that the Greeks set out to accomplish: “to blur the Jewish nation’s image of themselves as G-d’s holy and treasured nation.” But just as the Maccabees discovered the jug of oil, and re-dedicated the Temple, returning it to a state of purity and sanctity, we all have the ability to reclaim our identities and kindle the flame of Jewish pride at any stage of life.

As someone who grew up with a “traditionally untraditional” Jewish background, my pintele yid wasn’t always so strong.  But it was always there.

In college and then law school, the dedicated educators of MEOR, which literally translates as “illumination,” helped me tap into and express my Jewish light through inspiring leadership and heritage trips, Shabbat meals, and compelling classes on varied Jewish topics. The knowledge and experiences provided by MEOR on and off campus helped me understand why being Jewish is a sacred inheritance, and ultimately inspired me to return to Israel after law school to learn more about my Jewish identity.

That year, I clerked in the Supreme Court of Israel and met my husband.  Together, we are working to build a home filled with Jewish light.

The lights of the menorah in the dark winter nights teach us that “a small flame of light will dispel vast expanses of darkness.”  And we live in dark times, indeed.

In 21st century America, one faces new threats to building and maintaining a Jewish life of meaning: the overwhelming emphasis on materialism; the distraction that comes with modern technology; the increased focus on ourselves as opposed to the collective; and the impatience of wanting immediate satisfaction without hard work.  And as if that weren’t enough, Jews also face rampant anti-Semitism and the threat of the destruction of the State of Israel, our Jewish homeland.

We, the next generation of Jewish leaders, must band together and plan an illumination offensive.  If we wish to win this eternal war of light against darkness in the modern age, we must arm ourselves with our time-tested values and traditions and spotlight the depth and beauty of our heritage and spirituality. But most importantly, we must tap into our own unique inner potential, express it in the world, and “pass the candle” to ignite the next Jewish spark.

About the Author
Jenna Shweitzer Maio, Esq. studied English/Creative Writing at Emory University and Law and Environmental Sustainability at the University of Pennsylvania. She spent the past year in Jerusalem, clerking in the Supreme Court of Israel and learning at Midreshet Rachel v'Chaya, a Jewish women's seminary. She met her husband in Israel and they recently moved to LA. Jenna enjoys writing as a way to engage and inspire her generation, especially on Jewish topics.
Related Topics
Related Posts
Comments