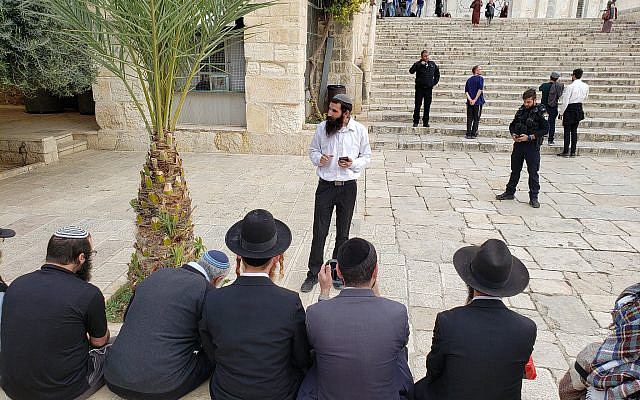 Listening intently to a lecture Shiur on the Temple Mount from the Rosh Yeshiva of Kollel Drishat Tzion and author of Har HaBayit Ka'Halacha Rabbi Elisha Wolfson.

Nowadays in medical school we are taught that the most effective form of patient-physician dynamic is one that sees the patient at its core. This type of medical care is associated with many markedly improved outcomes in a number of areas, notably adherence to treatment regimen and better health outcomes. It turns out that empowering patients to take a more active role in their health and/or recovery has an overall positive effect.

What makes the core concept behind this approach so compelling to me is its emphasis on personal responsibility. The studies backing this approach show that when people are encouraged to take responsibility for themselves they are more likely to rise to the challenge and act in accordance. The empowering effect of the patient-centered approach lies in its ability to transfer responsibility to its rightful barer – the patient – while allowing key guidance from the professional in an arena of mutual respect.

Another reason this dynamic of responsibility is so compelling to me is how it interfaces with Judaism. Judaism is full of responsibilities both individualised and communal. It is no stretch of imagination to say that the system of Mitzvot and their methodology of application, called Halacha, is predicated on this notion of responsibility. “I [Gd] have created the evil inclination and created for it the remedy of Torah” (Tr. Kidushin 30b). Our moral and spiritual status at any given point in time can be improved by our willing devotion to the Divine prescription – ‘Doctor’s orders,’ in a sense, but this Doctor is our Creator and His orders are His Mitzvot.

And so our own involvement in improving ourselves and the world around us stem from a similar patient-centered approach. It is our choice and responsibility to fulfil these commandments. In many ways, we have been empowered to be the healers of our own selves.

One is the healer of all ailment and bad disease [of the soul]… in his hand is the choice to be victorious in the battle [against his evil inclination] to direct his limbs towards the ultimate perfection. (Rabbi Yisrael Salanter, Or L’Yisrael 5)

This is precisely the meaning behind the Tabernacle – the Wandering Sanctuary, – and later the Eternal Temple in Jerusalem (Beit Olamim). Gd had ‘introduced’ Himself to us through the Exodus and revelation at Sinai. He delegated His commandments to us and even connected the two concepts of Mitzvot and healing (Exodus 15:26). After that, much of the rest of the Book of Exodus is dedicated to detailing every aspect of His dwelling place. “Let them make for Me a Sanctuary and I will dwell among them.” (Exodus 25:8) Gd wishes to dwell among us but the responsibility is incumbent upon us to ‘make the first move.’ We must bring the healing ourselves through collectively building this dwelling place. Our expectation cannot be that the Holy One will accomplish our tasks for us. Our relationship dynamic demands that we take an active part even after we fall so low (or maybe especially so) as to worship the golden calf (in Ki Tisa).

Ascending the Temple Mount today is a reality that crosses over into the realm of the miraculous. Every time I go up I get this excitement that comes with being involved in historical processes beyond myself. Although we have been promised time and time again by prophets and Rabbinical figures that ‘one day’ we will have a Temple on the Temple Mount we must not shirk from our responsibility. Our prophets, starting with Moses himself, have tied our destiny of peace and healing to the Temple.

But to dismiss the holiest place in Judaism with a wave of the hand because ‘one day’ it will return to its former glory is to dismiss our very responsibility. The Temple Mount is the holiest place in Judaism and is also its most under-appreciated and forsaken. When terrorist organisations freely preach hatred during Friday sermons; when the religious rights of, not only Jews, but of anyone who does not conform to the fringe views of a foreign nationalist body, are trampled in a democratic state; when the holiest place for one religion becomes the local soccer pitch of others with no respect for peoples of other faiths; when our own government has given up the keys to its holiest site to a foreign government against its own laws; when the people that so reveres the Temple Mount is so detached from it then we have abandoned our calling for harmony and healing. “A house of prayer for all the nations” is not a responsibility to be taken lightly.

The Temple Mount is not the problem but the solution. And our responsibility towards it will be bring healing both spiritually and nationally if only we recognise our duty.

About the Author
Natan is a medical school student and a social and Temple Mount activist. He hails from Toronto, Canada and made full Aliyah in 2014, although he has been making Aliyah to the Temple Mount since 2011. His passion for the Temple Mount began in Yeshivat Har Etzion and continued through his Bachelor's degree, his military service and work in the Israeli defense industry. Previously he was the project manager at Students for the Temple Mount and still guides on the Temple Mount at the Open Gate organization.
Related Topics
Related Posts
Comments