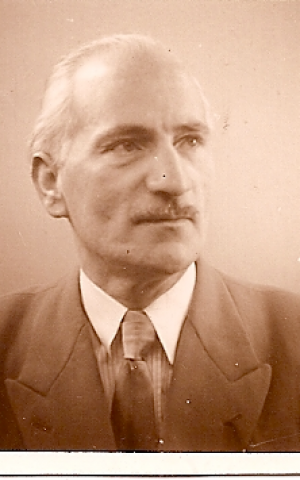 Last week, the local public television channel, KAN 11, broadcasted the remarkable story of the Swiss Pastor, Paul Zbinden, who saved a Jewish family and probably several other Jewish children during the Shoah.

The presenter, Yoav Krakovsky, introduced us to this rescuer by interviewing his grandson, Luc Zbinder, a Swiss teacher and educator who by chance, some 10 years ago, became aware of his grandfather’s feats.

Paul moved to France in the 1920’s together with his family and was in charge of a small Evangelical church at the village of Saint-Jean-du-Gard.

In a conversation with his aunt, Luc learned that his grandfather had saved Jews in France, during the Holocaust.

Following this revelation, Luc started a painstaking detective work, trying to piece together the story of his grandfather.

His voyage to the past led Luc to the widow of Peter Heller, who was the child of the Jewish family that was protected by Paul during the war. The elderly woman lives in the US, in the State of Vermont.  Luc also contacted one of Peter’s cousins, in Paris, himself a Shoah survivor.

With the help of the latter, Luc tried to earn Paul the title of Righteous among the Nations, an effort which has not borne fruits yet. Yad Vashem’s reluctance to grant the said recognition is due to the fact that none of the Heller’s family (Hans, Ingrid and their child Peter) has left any clear testimony about the life-saving actions of Luc’s grandfather

Luc is not bitter about Yad Vashem’s stance. He even understands it. As far as he is concerned, the most important thing is to instill Paul’s story in the hearts and minds of the young generations. This is how he connected with the Mikve Israel French School in Holon and set-up an exhibition about his grandfather. This educational initiative gained recognition from Yad Vashem itself.

Paul Zbinden visited Israel sometime in the 1970’s and was urged by a Jewish friend who survived the war as a hidden child in France, to get in touch with then Mayor Teddy Kollek, to try and persuade Yad Vashem to proclaim Paul as Righteous among the Nations.

Paul’s response was categorical. His feeling was that he did nothing special. He just followed his moral conscience, and he therefore did not think he was entitled to any special recognition.

Luc also tells Krakovsky that Paul was likely connected to french rescue networks and in such capacity, in 1942, he moved Jewish children from France to the Spanish border.

An interesting twist of the story is that Hans Heller (a musician) was a distant relative of Albert Einstein. Luc discovered that the renowned physicist had written two letters to the US authorities asking for help to enable the Heller’s to reach the United States.

While I respect Yad Vashem’s criteria when it comes to recognize the Righteous among the Nations, I think Paul Zbiden’s actions speak for themselves. I have been researching Holocaust rescuers for the last three decades and I can sense when a story is genuine.

Officially, Paul Zbiden will most likely remain an unsung hero but in our hearts, he will always be remembered.

I also praise his grandson for his noble and modest approach and above all, for his efforts to shed light on the awe-inspiring deeds of his heroic grandfather.