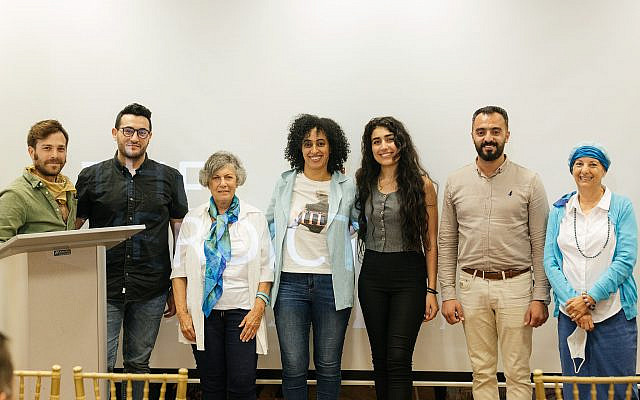 On October 5th, 2021, I attended an important event –the Mid-East Story Teller Awards–sponsored the Alliance for Middle East Peace (ALLMEP) at the America House in downtown East Jerusalem. Established in 2010, America House Jerusalem is the platform for public engagement of Palestinian Affairs Unit of the U.S. Embassy in Israel. Yes, there is still such a thing. According to its website, “The facility offers educational and cultural programs to promote common values and build Palestinian civil society”.

ALLMEP is an umbrella organization comprised now of 160 peacebuilding organizations in Israel, Palestine and via international NGO’S. This amazing organization connects thousands of Palestinian Arabs and Israeli Jews who work in a great variety of institutions. They help to promoted cooperation among organizations which increases impact and they assist in building an environment in the region which promotes peace over the long term.

The event for storytellers–which was the first public activity held by this organization since the corona epidemic began about 18 months ago– honored the work and the personal narratives of grassroots peacebuilders from Israel and Palestine. The program for the event highlighted the stories that some remarkable peacebuilders have shared during the past year.

The event was opened by Huda Abuarquob, ALLMEP’s Regional Director for the past 7 years. Abuarquob—who is an experienced and effusive Palestinian peace activist and feminist– applauded the courage and honesty of all of the peacebuilders who came forward to tell their stories. “There is no shame in being a peacebuilder,” she said. Indeed, she and her other staff members in Israel and Palestine have been going public more and more in recent months to tell their stories through programs like this one and through interviews on social media. While speaking about the importance of this program, she said:

We have been invisible for too long. We need to speak from the heart, to speak publicly, and to constantly reaffirm our belief in our work for peace..

In addition, Avi Meyerstein—the founder of ALLMEP who is spending this year in Israel with his family—welcomed everyone in attendance by stressing the growing impact of this kind of work:

Tonight shows just how much even one person’s story can open our minds, inspire us, and move us to act for change. Now imagine them multiplying. Imagine if there were thousands of people who not only had these kinds of stories but also had a platform to tell them. They could reach millions of people.

This group of storytellers represented a variety of peacebuilding initiatives from within ALLMEP’s membership, including participants from Women Wage Peace, Zimam, Tech2Peace, Yala Young Leaders, New Story Leadership, B8 of Hope, and Standing Together. ALLMEP has long considered the diversity of its membership to be among its greatest strengths and, as their members continue to grow and expand, they showcase their work through special programs like this.

Three storytellers received awards of $1000 in support of their activism: Micha Silverman  of Tech2Peace, Rawan Odeh of New Story Leadership, and Mahmoud Waked of Zimam. One can listen to all of their stories and learn more about the program on the ALLMEP website.

I have been following the growth and development of the Alliance for Middle East Peace for many years. It is a groundbreaking pioneering organization which has helped to raise millions of dollars for peacebuilding programs and projects in Israel and Palestine for many years.

Last year, ALLMEP was instrumental in helping a new law get passed in the U.S. Congress, called The Nita M. Lowey Middle East Partnership for Peace Act. This  historic legislation will deliver unprecedented levels of funding for peacebuilding in Israel and Palestine. The law provides $250 million over five years to expand peace and reconciliation programs in the region, as well as to support projects to bolstering the Palestinian economy. In addition, ALLMEP has been working for a long time on an International Fund for Israeli-Palestinian Peace. This fund is envisioned as a $200 million annual fund which would be dedicated to creating civic foundations upon which a lasting peace can be built. The fund would scale and incentivize the further development of effective people-to-people programs, enabling them to increase their impact in Palestinian and Israeli societies. In addition, ALLMEP staff are producing and promoting special programs like this one  with many inspiring people who are courageously sharing their personal narratives.

The work of this coalition reminds us all the time that peace is possible, and that there are many people and organizations working towards peaceful living in a great variety of ways all over Israel and Palestine. Too many people have given up on the benefits of peace for everyone in our region, but these peacebuilders persist. In so doing, they keep a flicker of hope alive amidst many obstacles and challenges.