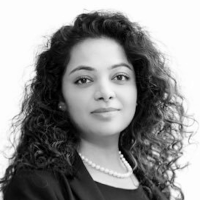 The Blogs
Tanusree Jain
Apply for a Blog
Advertisement
Please note that the posts on The Blogs are contributed by third parties. The opinions, facts and any media content in them are presented solely by the authors, and neither The Times of Israel nor its partners assume any responsibility for them. Please contact us in case of abuse. In case of abuse,
Report this post.

Standing at the crossroads of Europe, Asia and Africa, Israel represents a context that is historically, culturally and linguistically distinct from the rest of the Middle East and North Africa region into which it is often clubbed. Technologically advanced and economically prosperous, it is a part of an exclusive club of a high income countries embedded in a rather turbulent and conflict-affected region of the Middle East. Notwithstanding the political disputes that have marred the country and its neighbours, Israel has emerged as an entrepreneurship powerhouse, highly ranked on the Human Development Index, Bloomberg’s Innovation Index, and a regional ranking comparable to the richest Gulf countries.

Similar to the oil-centric rich economies of the world that are now facing pressure to demonstrate responsible capitalism and environmentally sustainable development; companies in Israel also face stakeholder pressures to do well by doing good. As the importance of corporate contributions to tackling social and environmental problems steadily increases, doing good can take several forms. Traditionally, companies in Israel would do good through corporate philanthropy and employee volunteering. Philanthropy helped firms attain a positive image and reputation, while employee volunteering improved staff perceptions of their companies, positively impacting job satisfaction. However, as newer forms of corporate accountability for social and environmental performance emerge, newer ways of contributing to them through CSR are also called for.

Some large companies functioning in the country have undertaken significant CSR work in this direction that includes dealing with complex environmental issues of the mining sector, preserving water through innovative irrigation solutions, creation of advanced construction materials that are energy efficient, and skilling up employees and communities to counter poverty and inequality. Yet, when companies are embedded in a context that is conflict-affected––that is where countries experience continuous violence, hostility, and political turmoil with substantive institutional upheavals––it contributes both to political and societal instability that can be catastrophic for business and its stakeholders. Peacebuilding emerges as a solution, however it has thus far mostly witnessed the involvement of political actors––national, regional and international non-governmental agencies such as the United Nations, and grassroots efforts at peacebuilding which, although effective, are likely somewhat slow moving in terms of impact.

Given the peculiar geography of Israel and Palestine, interaction and socio-economic interdependencies for both sides is inevitable. It is here that business can emerge as a powerful actor for peacebuilding as a new form of CSR.

The avenues for promoting peace and a cohesive Israel are manifold. Whether it be contributing to economic development and promoting entrepreneurship within the region, or delivering a two-way model of diplomacy (whereby firms act as mediators, suing for peace and reconciliation) and advocating for social harmony and greater homogeny among rivaling communities, business must take the opportunity to act as a peacebuilder in a country marred by conflict but rife with commercial opportunity.

There are many drivers of conflict. Poverty must be acknowledged as one. As such, driving economic development must be seen as a credible means of supporting peacebuilding efforts. That’s not to say that financial prosperity will bring an end to conflict in an environment plagued by civil and political unrest, but the inevitable ‘spill-over’ effects of economic activity (employment opportunities, capacity building, greater training/upskilling), and their impact in supporting peacebuilding efforts, cannot be overstated. Closely linked, the promotion of entrepreneurship within the region is also a means of ensuring that further wealth-creation isn’t simply limited to a minority of elites in the region, but that the commercial opportunities are spread for the wider communities to enjoy.

But financial solutions alone are not enough. Business must go further – venturing out of ‘the comfort zone’ and playing a more direct role in supporting peace and reconciliation. The aforementioned two-way diplomacy model lends itself as a legitimate option for firms to take an active role in peacebuilding through impartial, independent mediation. But they must also have a voice, echoing calls for peace to marry-up with their actions. Only though consistent action and rhetoric can firms bring about social cohesion in war-torn and conflict-rife regions, such as Israel.

A unique country with an ever-growing commercial footprint, Israel continues to look all the more appealing to businesses wanting to expand their operations into new regions of the world. But with a history of conflict that has proven pervasive, firms face a daunting task of operating in an environment that, at times, could prove hostile. And yet, Israel is not alone. Several countries today are in the wake of social and political turmoil, and so business must be equipped to address those issues. Firms must demonstrate that, alongside to committing to global targets such as those outlined by the UN’s Sustainable Development Goals – one of which names ‘peace’ as a target to meet – social cohesion and harmony are also on their agendas.