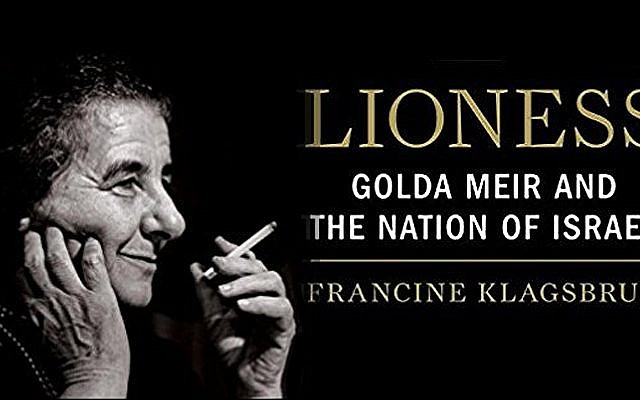 The book cover of Francine Klagsbrun's Lioness: Golda Meir and the Nation of Israel

Mendele Moykher-Sforim — Mendele the Book-Peddler — was the pen name of one of the classic writers of Yiddish literature, Sholem Abramovitsh. To be sure, I have nothing in common with this great writer, but his pen name resonates with me. Over the past 10 months I seem to have metamorphosed from being a writer to being a book peddler. All the years of sitting alone at my computer, struggling to perfect a sentence or organize my research, have turned into a whirlwind of traveling, lecturing and publicizing my new biography of Golda Meir, Israel’s fourth prime minister.

Like authors everywhere, I’d gone “on tour” in the past with other books I’ve written. But nothing in my experience compares to the number of places I’ve visited and talks I’ve given in relation to this book. With woman power on the rise, Golda’s story seems to have struck a chord. I’m not complaining, mind you. It’s a great privilege — and one that we authors long for — to be invited to communities throughout the country to speak about our work.

Still, there are days in which it all becomes a haze. Am I in Springfield, Mass., or Springfield, Ill.? Is this June or July? And there are incidents that, as prepared as I might think I am, take me by surprise.

Consider, for example, the woman at one of my earliest appearances who scolded me about the image of Golda Meir on the book’s jacket. I have loved that image and the jacket itself, created by one of my publisher’s top designers. “She’s holding a cigarette. That’s a terrible message for you to send,” the woman shouted at me. “But Golda was a chain smoker,” I explained. “She always had a cigarette in her hand.” Unappeased, the woman stormed away. “I would never buy a book with such a cover, and nobody else should either,” she called behind her. Not many sales that evening.

Or the woman who informed me when she picked me up at the airport that the only way to engage the audience at that night’s event was to focus on the “smut.”

“Yeah, you know. Her love affairs. That’s all they want.”

True, Golda had several romances that I included in my book. But, as I pointed out, they weren’t smut, and there was a great deal more to her story — she was, after all, one of the founders of the Jewish state.

“Suit yourself,” my escort snorted. “I’m warning you that the only thing this group cares about is the smut.”

Happily she was wrong. The audience responded warmly to my talk about many aspects of Golda’s life. But I’d already spent the afternoon anxiously anticipating the worst.

Then there was the book and author luncheon, with “500 book-buying women,” as I was told. One of three authors on the program, I was slated to speak last. As I rose to the platform to begin my remarks, a bevy of women rose at the same time — and raced for the exits. What happened? Had I done something wrong even before saying a word? Of course not, my host assured me later. The exodus had nothing to do with me or my book; the women were rushing out to beat the crowd in getting their cars from the parking lot. Oh.

And will I ever forget the man who introduced me by giving his own life story at great length, then sat down without once mentioning my name? Or the Israeli historian, author of a biography of one of Golda’s rivals, who hated her and so identified me with her that he refused to look at me as we sat on the stage together or shake my hand afterward?

Yet for all the mishaps, there were wonderful moments. In Key West, Fla., the writer Judy Blume and her husband George Cooper, who own a beautiful bookstore there, partnered with a nearby synagogue to ensure a large audience, sold lots of books, and hosted me so graciously that I never wanted to leave. At Har Zion Temple outside Philadelphia, Temple Sinai in Los Angeles, JCCs in Detroit, Milwaukee, Dallas and many other places, events bubbled with the energy and excitement of the local community. Then, too, the volunteers who run Hadassah, Israel Bonds and other communal organizations have left me awed by their dedication, hard work and down to earth “know how” that made their programs great successes. And everywhere, people asked smart, incisive questions after my talk. In short, there is a vital and devoted Jewish community in this country, in spite of problems of assimilation and intermarriage, and don’t let anyone — including Israeli politicians — tell you otherwise.

As for me, writer-temporarily-turned-book-peddler, I still have about 10 more appearances ahead. Then I’ll rest. Then I’ll miss it all.