The Blogs
Petra Marquardt-Bigman
Apply for a Blog
Advertisement
Please note that the posts on The Blogs are contributed by third parties. The opinions, facts and any media content in them are presented solely by the authors, and neither The Times of Israel nor its partners assume any responsibility for them. Please contact us in case of abuse. In case of abuse,
Report this post.

Under the title “Embattled Truths: Reporting on Gaza with Max Blumenthal,” PEN Canada recently announced on Facebook that on February 24, they will host “acclaimed US journalist Max Blumenthal, author of The 51 Day War: Ruin and Resistance in Gaza on the challenges of sifting truth from propaganda when reporting on conflict in the Gaza Strip.”

The announcement further asserts: “Searching for truth within the fog of war is particularly consequential in dispatches from Israel’s occupied territories. Depending on where we get our news, Gaza is either a terrorist haven and a legitimate military target, or a zone of unjustified violence against a captive civilian population.”

So PEN Canada isn’t quite sure what to think of Gaza, but they are apparently sure that Max Blumenthal is the right person to help with “searching for truth.” In an additional post, PEN Canada responded to some critical reactions to their decision to host Blumenthal: “As an organization that advocates for free speech, we are committed to open dialogue. Max Blumenthal has been invited to speak due to his extensive experience as a journalist in Gaza with articles appearing in the New York Times, the Guardian, the Nation, and Al Jazeera English.”

It seems PEN Canada could use some help in their search for truth – and since I have extensively documented Max Blumenthal’s antisemitism and support for terrorism in the past few years, I will try to help out with a short summary of relevant information and links.

Let’s start with Max Blumenthal’s “extensive experience as a journalist in Gaza.” As I have shown in an article published last June, when Blumenthal’s recent book on the 2014 Gaza war was about to be published, he falsely sought to create the impression that he spent most of the war “on the ground” in Gaza. In reality, Blumenthal’s own statements prove that he entered Gaza only in mid-August 2014, i.e. after about a month of fighting and only some two weeks before the end of the fighting on August 26. It can also be clearly established that Blumenthal left Gaza after a week, deeply impressed by, and sympathetic to, the “true resistance” of terror groups like Hamas and Islamic Jihad.

However, as anyone familiar with Blumenthal’s writing on anything to do with Israel will know, it wasn’t actually necessary for Blumenthal to go to Gaza to make up his mind about what was going on. With his previous book “Goliath,” Blumenthal had gained a well-deserved reputation as an unrepentant anti-Semite. He had written the book to make the case that Israel is the Nazi Germany of our time and should be treated accordingly; indeed, during his book tour, he suggested that once Israel’s elimination as a Jewish state became feasible, Israel’s Jews should be ethnically cleansed if they were unwilling to “become indigenized” by accepting Arab dominance in political, cultural and social terms.

Not long after that, Blumenthal apparently began to feel that equating Israel with Nazi Germany wasn’t quite enough to demonize the Jewish state, and he started to promote the notion that Israel was the Jewish version of the terror group Islamic State (IS/ISIS). The best response came from Tablet Magazine’s Yair Rosenberg, who tweeted:

“How to be an anti-Semite:

2) Equate it with the Jews or their state

By that time, Max Blumenthal had already won plenty of fans wherever there are Jew-haters. His output on Israel was shared and promoted on all the major sites popular among conspiracy theorists, racists and neo-Nazis: from Stormfront to David Duke’s site, Rense, and Veterans Today, as well as various other blogs with titles like “‘The Ugly Truth’ about ‘Zionism, Jewish extremism, and a few other nasty items making our world uninhabitable today.’”

Having studied this “scene” in some detail, I can assure PEN Canada that Max Blumenthal’s fans there would fully agree that he has “embattled truths” to share.

Of course, the problem with the kind of “embattled truths” about Israel which Blumenthal claims to be offering is that they are “embattled” precisely because most mainstream outlets don’t consider them “truths.” It is therefore rather misleading when PEN Canada claims that Blumenthal has “extensive experience as a journalist in Gaza with articles appearing in the New York Times, the Guardian, the Nation, and Al Jazeera English.” While Blumenthal has been published on these sites in the past, he and his admirers have long been complaining that his output is increasingly being shunned by publications like the New York Times. Thus, a glowing review of Blumenthal’s book on the 2014 Gaza war at the Electronic Intifada noted grimly: “Blumenthal’s previous book, Goliath: Life and Loathing in Greater Israel (2013), met with an establishment media blackout. However, that blackout was so blatantly obvious, it will probably not be repeated this time around. The corporate media will likely attack this book, rather than draw a veil of silence around it.”

But a few months later, another ardent admirer of Blumenthal explained on another “hate site” much loved by anti-Israel activists that “the mainstream U.S. media is afraid to review” the book because Blumenthal “repudiates the conventional history so decisively that readers of the New York Times, the Washington Post, and other major outlets would be stunned into asking some pointed questions about the myths they are being fed.”

Among the most important “myths” that the mainstream media allegedly feed their readers, and that Blumenthal and his supporters energetically fight, is that groups like Hamas and Islamic Jihad in Gaza are terrorist groups. Of course, numerous countries – including the US and Canada – list Hamas or its military wing (whose exploits Blumenthal admires so much) as a terrorist group; the same is true for Islamic Jihad.

But never mind the fact that since Israel left the Gaza Strip ten years ago, these groups have launched more than 11,000 mortars, rockets and missiles against Israeli communities, putting some two thirds of Israel’s population at risk – for Max Blumenthal and other leading anti-Israel activists like Ali Abunimah (with whom he often co-operates) Hamas and Islamic Jihad are the glorious “resistance” that heroically defends Gaza against completely unprovoked Israeli onslaughts.  Indeed, as far as Max Blumenthal is concerned, it is Israel’s army that should be condemned as a terrorist group made up of cowards; and who knows – maybe there’s even an “alliance between al-Qaida and Israel”???

Duly acknowledging Blumenthal’s tireless demonization of Israel and his energetic defense of Gaza’s terrorist groups, one of Britain’s leading Islamist sites – which often serves as a mouthpiece for Hamas and regularly glorifies terrorism – praised his book as “the definitive account of the 2014 Israeli war on Gaza.” As it happens, this glowing review was authored by the same writer – who also happens to be a regular contributor to Abunimah’s Electronic Intifada – who had come up with the absurd post on “Israel’s alliance with al-Qaeda.”

So quite obviously, Blumenthal is not only free to write and publish, but he has gained dedicated audiences for his output on the fringes of the far-right and the far-left. Why PEN Canada would want to give him a platform at the Toronto Public Library to help mainstreaming his bigoted hatred for Israel and his open support for terrorism against Israel’s Jews is a question only PEN Canada can answer. However, Blumenthal has no “embattled truths” to offer, and it is utterly depressing that PEN Canada has decided to feature him “in honour of Freedom to Read Week”: yes, everybody is free to read Blumenthal’s hate-filled screeds that demonize Israel and justify terrorism against its citizens, but it’s rather sad that PEN Canada didn’t find more deserving writers for such an event.

Perhaps it would be helpful to evoke the old saying that “a picture is worth a thousand words” and illustrate the kind of “embattled truths” Blumenthal has to offer with an image that he obviously considers as presenting such an “embattled truth:” 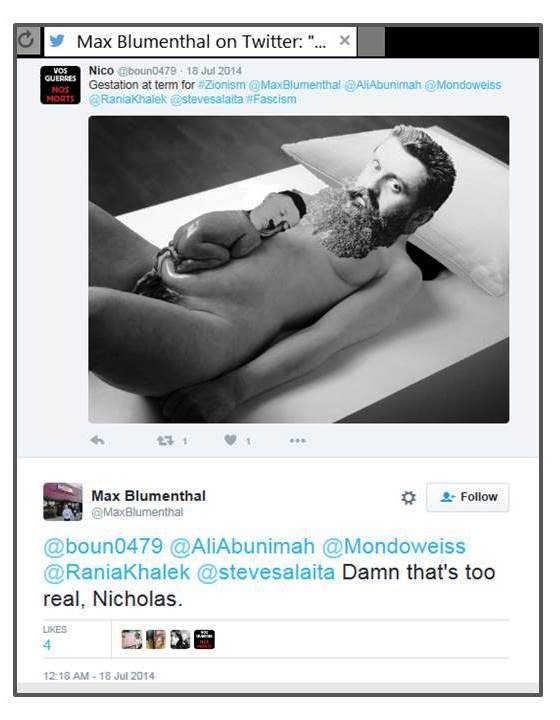 Maybe the Toronto Public Library could decorate its Atrium with a large print-out of this image and Max Blumenthal could tell everyone why he considers it as “too real”?

As one can look up in many books – all of them surely available at the Toronto Public Library – there’s a long history of people who sincerely felt that their views about the unspeakable evil brought into the world by Jews were some kind of “embattled truth.” Through almost two millennia, defenseless Jews often paid with their lives whenever this kind of “truths” became widely accepted. But some people just can’t accept the fact that there is now a Jewish state that will defend its citizens against attacks by those who still believe that there “is no war going on anywhere, without [Jews/Zionists] having their finger in it,” and who decry the “Nazi treatment” that “the Jews” inflict upon Palestinians. And yes: the complaint about the “Nazi treatment” is not from Blumenthal this time, but from the Hamas Charter. As the historian Jeffrey Herf rightly noted in an excellent article on “Hamas’ Too-Little-Known Fascist Charter”: “Though Islamism owes a considerable debt to Nazism, the Hamas Covenant claims that it is Israel that is the equal of Nazi Germany.” So does Hamas apologist Max Blumenthal, whose views PEN Canada has decided to promote “in honour of Freedom to Read Week.”