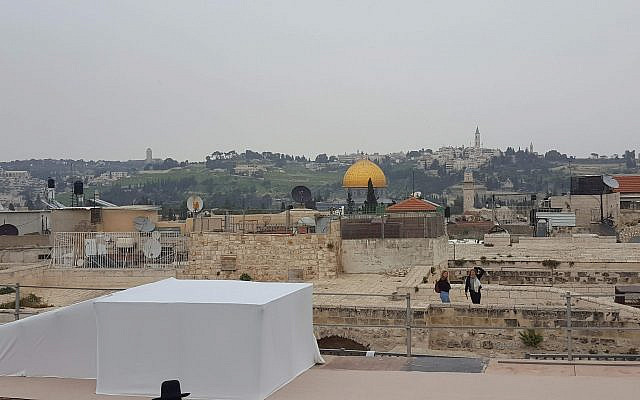 A picture of the 'practice-run' for Korban Pesach from 2019 I attended.

As we approach Passover we simultaneously approach the concept of the Paschal sacrifice. And as someone who has reviewed what exactly this Korban Pesach entails and have even attended the Tirgul – the ‘practice’ run done every year by the Temple organizations – I believe I have a pretty rounded understanding of the concept. Actually, every year I am kind of surprised as to why some people come out as so anti to this most ancient Passover practice. After all, our Haggada and Jewish ethos yearns for the reinstitution of this practice on the Temple Mount – Temple or not.

Therefore, I believe it wise to share some common misconceptions as to the notion of the Passover sacrifice and some of the realities behind this custom.

1. Killing animals for the sake of sacrifices is barbaric!

Let’s face it, if you eat meat normally there is not much of a difference here. Korban Pesach is meant to be eaten by those offering it. Many of us (perhaps most) will eat meat at their Passover Seder this year. And just in the same way that animal was slaughtered in order for you to eat it the same applies here. The difference is in its preparation. The way the meat is prepared for Korban Pesach includes a number of things. Firstly, it is slaughtered in the same way as any Kosher meat is but the place it is slaughtered (Temple Mount) is different. And just like any Shechita certain fats and blood CANNOT be eaten but unlike a regular Jewish slaughter, where these animal parts are put aside not to be used, these fats are burned on the Altar and the blood is disposed of in a special location on the Altar. So far this is not too different from a regular Halachic preparation of the meat. Essentially, this is like going to a slaughter house that prepares your meat for Pesach in the Halachically appropriate fashion. After this preparation, the Pesach is meant to be taken home and roasted before the night of the Seder begins.

Thus, the preparation of the meat here is what sets it aside for its use IN THE SEDER. The key phrase here being ‘in the seder.’ The value in Korban Pesach is not in sacrificing an animal but rather preparing it in Kedusha for one of the holiest nights in Jewish tradition.

Which brings me to the second myth.

This is not only Halachically incorrect but missing the mark of the entire night. The entire night of Pesach is centered around the supreme value of Chinuch – education. This is the night where we discuss the events that forged our people and pass onwards the connection to these events along with our mission statement. It is no secret that the main prop on this holy night is food. Food takes the biggest showcase here with the four cups of wine, the Matza, the Maror, etc… and THE PESACH. The entire holiday is called by this food prop. Through these objects we connect to a story that we have build a legacy upon. The Korban Pesach is meant to be that main educational tool. It is what they did immediately prior to their escape from Egypt and so do we continue that legacy.

But the Pesach offering is even more than an educational tool. Only two positive commandments carry the heavy Divine punishment of Karet – spiritual detachment from the Jewish people. The first is circumcision because the covenant between Avraham and his Creator is definitive in Jewish identity. The second commandment is Korban Pesach. More than just a prop, the link that this creates that reverberates back to our nation’s forging is just as definitive for Jewish identity as Brit Mila – and we mention as much in the Haggadah.

These were simply two common misconceptions I have been noticing pop up as we get closer to Passover. There are even more which maybe I will tackle another time. Suffice it to say that there is Halachic consensus that Korban Pesach can and should be done in our times without a Temple. 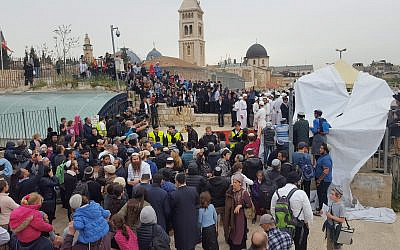 Some of the crowd attending a ‘practice-run’ of the Korban Pesach in 2019 I attended. You can see the Cohanim in practice robes on the right.
About the Author
Natan is a medical school student and a social and Temple Mount activist. He hails from Toronto, Canada and made full Aliyah in 2014, although he has been making Aliyah to the Temple Mount since 2011. His passion for the Temple Mount began in Yeshivat Har Etzion and continued through his Bachelor's degree, his military service and work in the Israeli defense industry. Previously he was the project manager at Students for the Temple Mount and still guides on the Temple Mount at the Open Gate organization.
Related Topics
Related Posts
Comments