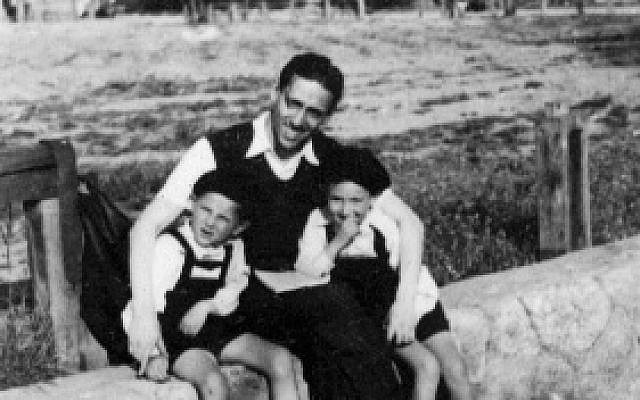 A photograph from the memoir of Peretz Revesz "Standing Up To Evil" published by Yad Vashem. Source: Yad Vashem Publications

In this blog and in two subsequent posts, I address the figure Peretz Revesz and how he helped save fellow Jews in Hungary during the Holocaust.

I never actually met Peretz Revesz, although in the last years of his life I spoke to him quite a few times on the phone. Back in the 1980s when I was working on my MA thesis and PhD. dissertation on Jewish responses in Hungary and Slovakia, his name came up frequently in documents and testimonies. Unfortunately, when I sought to interview him, he was quite ill at the time.  Thankfully he recovered and some 20 years later through our phone calls, I feel I did get to know him personally. We mostly spoke about the English language manuscript for his memoir, which Yad Vashem elected to publish and I was asked to go through for clarity and historical accuracy. The hope at the time was that we would publish the memoir quickly, since Peretz was already well into his 90s.  Regrettably that did not happen. Peretz passed away in 2011, at the age of 95, and his memoir, Standing Up to Evil, A Zionist’s Underground Rescue Activities in Hungary was released only in 2019, by Yad Vashem. Although Peretz was no longer with us, he was very much with me during the year or two before the book appeared, since Dania Valdez, who was responsible for bringing the book to press for Yad Vashem, asked me a great many questions to tie up loose ends and polish the manuscript before it was printed.

During the Holocaust, Jewish activists in Slovakia and Hungary displayed courage, ingenuity and great intensity as they engaged in a torturous struggle to rescue Jews from the hands of German, Slovakian and Hungarian perpetrators.  Remarkably, Peretz Revesz had a direct hand in many of these efforts, or was a close witness to these activities

Who Was Peretz Revesz?

Peretz was born on April 6, 1916 in Holić in western Slovakia where he grew up with his two brothers Juraj (Yona) and Pali (Yehuda, Pufi).  Their father was a lawyer and very involved in the Jewish community of the town. The boys all were drawn to Zionism, and Peretz, who was a talented sprinter, became a leader of the Maccabi Hatsair Zionist sports organization. After graduating from high school, he began to study medicine. On the heels of the Munich Agreement in autumn 1938, which first gave Slovakia autonomy and then independence, he left his medical studies because of restrictions against Jewish students, and devoted his time fully to Maccabi Hatsair.  In October 1939, he became engaged to Nonika Feder and they planned to make Aliyah together, a plan that unfortunately was thwarted by the war. They married in January 1941 and Nonika became partner to many of Peretz’s activities on behalf of his fellow Jews. Called up for forced labor in 1941, Jewish community activists paid a ransom to have him released so Peretz could continue his work with Maccabi Hatsair.

On March 26, 1942 in coordination with the Germans, the Slovaks began deporting Jews to Poland. The first transports contained young women and then young men, many of them members of the Zionist youth movements. The young Zionist leaders decided that fostering flight to neighboring Hungary, which was much quieter at the time, was the order of the day.  Peretz, and his movement like the other Zionist youth movements, devised ways and means to help their members cross into Hungary. Sought out by Slovak gendarmes for his role in this escape, in April 1942 Peretz and Nonika felt they, too, had to flee to Hungary. Their first attempt failed because they were betrayed by the smuggler. Their second attempt, however, succeeded when with the help of a barge captain they sailed down the Danube surreptitiously from Bratislava to Hungary. 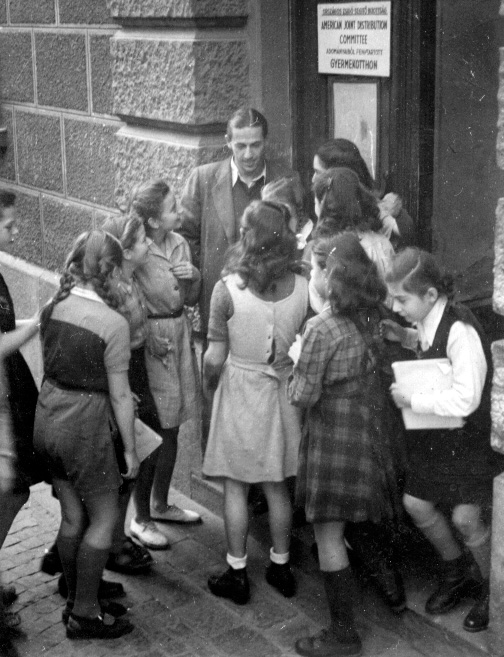 A photograph from the memoir of Peretz Revesz “Standing Up To Evil” published by Yad Vashem. Photo: Yad Vashem Publications.

Rescue in Hungary before 1944

Before he left, the Zionist leadership in Bratislava asked Peretz to assume responsibility for helping Slovak Zionist refugees reach and establish themselves in Hungary.  Given the cold shoulder by the first Hungarian Jewish leaders he met, Peretz found not only attentive ears and practical help, but close friends and colleagues in Joel and Hanzi Brand, who themselves were involved in aiding Jewish refugees in Hungary.  In this way, Revesz became an early participant in what came to be known as the Vaada L’Ezra Vehatsalah (the Relief and Rescue Committee), soon to be led by Otto Komoly, the leader of Hungarian Zionism, and Rezső Israel Kasztner, a Zionist leader from Transylvania; in addition to them, prominent figures in the group included the cautious and shrewd veteran Zionist, Shmuel (Sammu) Springmann whose connections and financial acumen were crucial to their work.  In December 1942, the Vaada (Committee) was officially recognized as an arm of the Jewish Agency, and Peretz became the liaison between the Zionist youth movement underground and the Vaada.

In the meantime, Revesz, working with Joel Brand, found find ways to obtain additional resources to finance and absorb refugees already in Hungary and new arrivals.  Peretz soon became responsible for providing false documents to members of his movement who reached Hungary, and these activities later became better coordinated between all of the various streams of Zionist youth.  It is estimated that between 6,000 and 8,000 Slovak Jews reached Hungary before March 1944; a great many of them crossed into Hungary with the help of the semi-underground Working Group and Zionist youth in Slovakia, and the Vaada and Zionist youth in Hungary. Many received false papers from the youthful forgers.

With encouragement from the Yishuv rescue activists in Istanbul in April 1943, it was decided to help Jews from Poland reach Hungary by way of Slovakia, and a Tiyyul Committee was established by the Vaada under Joel Brand. The Zionist youth in Hungary and Slovakia became partners in this rescue effort, as did the Working Group. Joseph Baumer of Hashomer Hatsair and Peretz were named members of the committee representing the Zionist youth in Hungary. Support and funding came from the Jewish Agency and its rescue representatives in Istanbul.  It is hard to know exactly how many Jews were brought to Hungary from Poland through the Tiyyul Committee, but it may have been as many as 2,000 before the German occupation in 1944.

Owing to their various activities before the Germans entered Hungary on March 19, 1944, the Vaada and the Zionist youth developed may underground skills and sensitivities. This made them relatively well positioned to confront the new situation that arose with the German occupation and to facilitate rescue in a variety of ways.  In the following months, Peretz would become even more deeply involved in rescue work on different levels, despite the sharply increased danger after the Germans arrived.