The Blogs
Mendy Chitrik
Chair of the Alliance of Rabbis in Islamic States
Apply for a Blog
Please note that the posts on The Blogs are contributed by third parties. The opinions, facts and any media content in them are presented solely by the authors, and neither The Times of Israel nor its partners assume any responsibility for them. Please contact us in case of abuse. In case of abuse,
Report this post. 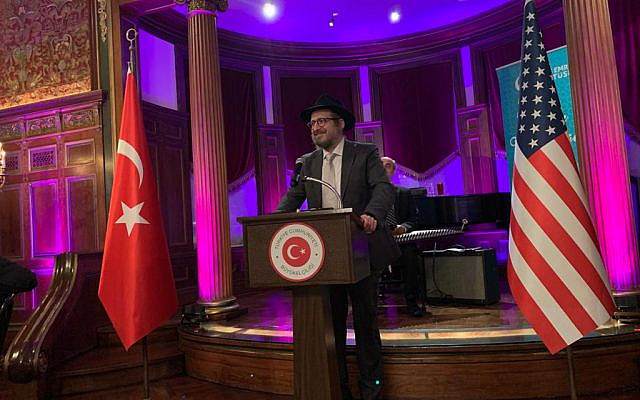 Rabbi Mendy Chitrik addressing the Iftar at the residence of the Turkish Ambassdor the the US (credit: Turkish Embassy DC)

Opinion: Personal, not Political, Relationships are the Future of Jewish-Muslim Coexistence

While recent political breakthroughs in the Middle East and the Gulf region are encouraging for Jewish-Muslim relationships, the Islamic world stretches far beyond the Gulf countries and it is personal relationships and local communities that will always be the key to relationships throughout the Muslim world.

On August 13, 2020, a joint statement — the Abraham Accords — pronounced the formal and public diplomatic relations created between two Arab Gulf states — the United Arab Emirates and Bahrain — and Israel. It had been decades since a treaty like this had been negotiated and agreed upon — the only others had been the Israel-Jordan peace treaty of 1994, and before that, the Egypt-Israel peace treaty in 1979.

The Abraham Accords brought normalization that has already resulted in an influx of travel and trade between the countries, including plenty of kosher tourism. Since then, other Arab countries — Morocco and Sudan — have penned agreements of their own with Israel, and the spirit of reconciliation between countries and communities continues to grow.

Despite these revolutionary achievements — and without dismissing the virtues of intergovernmental cooperation — we cannot place our focus and hope on politics. Instead, we must recognize that Jewish-Muslim coexistence depends on human-to-human relationships, irrespective of our countries’ political stances.

As Chairman of the Alliance of Rabbis in Islamic States (ARIS), an apolitical rabbinic organization that boasts members from Azerbaijan, Morocco, Turkey, Tunisia, Iran, Kazakhstan, Kosovo, Kyrgyzstan, UAE, Uganda, Uzbekistan, and Nigeria, among others, we, as a group, collectively know that while political winds turn, peace and coexistence are best developed and are ultimately sustained by what we do each day: engage and cooperate in Muslim countries, including many that are hundreds or thousands of miles from the Middle East — even in countries that have strained relationships with Israel.

Members of ARIS live permanently in these Muslim countries and understand the needs of its population, and are there to help in compassion. 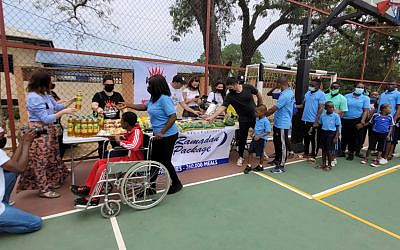 For several years the Jewish community of Turkey has served traditional Iftar meals to the needy. ChabadAid, a Nigeria-based organization, along with the Foundation For Ethnic Understanding (FFEU) and the imam of the Grand Mosque in Abuja, Nigeria, delivered food for the needy to 17 states across the country. Many similar cases take place every year during Ramadan in the countries we live in.

In what seems to be a budding tradition, I had the honor of recently attending an Iftar dinner with the newly appointed Turkish Ambassador to the US, His Excellency Murat Mercan. In attendance were religious and lay leaders, amongst them was also Ambassador Elin Suleymanov of Azerbaijan, with the largest Jewish community in the Muslim world. While Jewish guests were served kosher – we all shared the festive atmosphere of brotherhood and companionship. 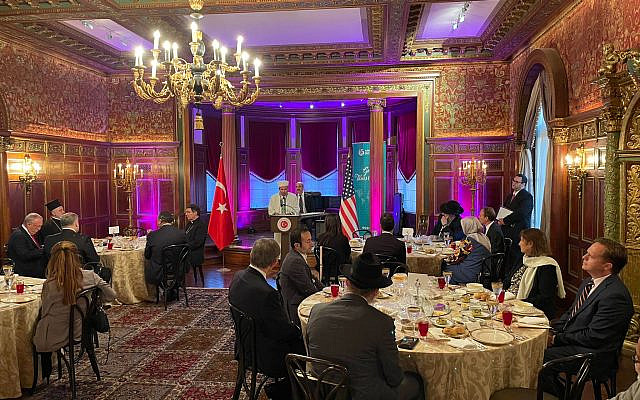 Muslims, Jews, Christians and others break bread at an Iftar at the residence of the Turkish Ambassador to the US (credit: Turkish Embassy DC)

At the dinner I spoke of the journey of our mutual forefather Avraham – Ibrahim or Abraham – who discovered monotheism in the Turkish city of Harran, and has gifted us the heritage of hospitality, faith, brotherhood and common destiny, which shall being us towards healing and reconciliation.

Even more recently, I had the privilege of meeting with the ambassador of Kazakhstan to the United States, and we discussed the model of multiculturalism and coexistence that exists in his country and the eight synagogues and twelve rabbis who call Kazakhstan home.

With more empathetic and compassionate deeds like these toward our Muslim neighbors and friends, we can see real progress and a growing brotherhood. Although intergovernmental treaties and agreements are publicly and formally helpful, they don’t make friendships — people do. And it’s those people who keep the treats and are the bedrock that ensures the long term viability of them. 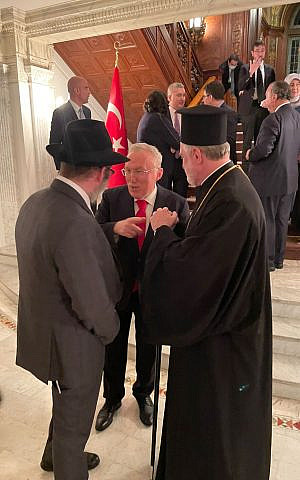 Reconciliation with the Islamic world and with the Muslim population should not be tied to changing political climates or diplomatic breakthroughs. While diplomatic developments between Israel and Gulf states are important and encouraging for the Jewish people, it is important to “normalize” the existence of Jewish life in the Muslims world, beyond the gulf, and beyond the treaties, as important as they are.

The Abraham Accords opened up new doors for Jewish-Muslim relations, but those relations are far too important to hinge upon politics. We must recognize our common humanity and, as the Ethics of Our Fathers reminds us: “Let the honor of your fellow be as dear to you as your own.”

I truly hope that Jews and Muslims in countries from Jakarta to Istanbul, from Tehran to Islamabad extend hands in friendship and, with God’s help — inshallah — see all the benefits a friendship has to offer.

Rabbi Mendy Chitrik serves as the Ashkenazi Rabbi of Turkey and Chair of the Alliance of Rabbis in Islamic States, follow us on Twitter @RabbisAlliance

About the Author
Mendy Chitrik is the Ashkenazi Rabbi of Turkey and Chair of the Alliance of Rabbis in Islamic States.
Related Topics
Related Posts
Comments