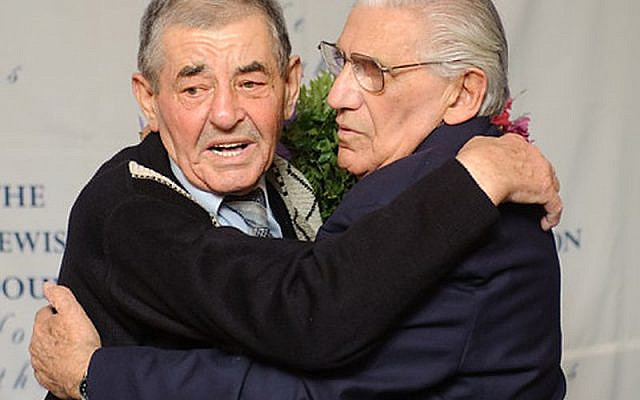 Today is International Holocaust Remembrance Day. It’s a day that should be recognized and memorialized. In 2022 America, it’s the day after a school district in Tennessee banned the Pulitzer Prize winning graphic novel, Maus, by Art Spiegelman due to what they claimed was inappropriate language and images. Of course, the images were of mice and cats, not people, but that is beside the point. The United Nations just passed a resolution against Holocaust denial and condemning the Nazi genocide the murdered six million Jews. Fortunately, Israel was able to submit the resolution and have it passed by 114 members of the General Assembly with only Iran opposing it. As the years pass and the Holocaust survivors pass away, it is more imperative than ever that their stories are told.

Personally, I am married to a second-generation survivor. My husband’s parents were both survivors and through them I met a community of people who were determined to prove that Hitler failed. These people made successful lives for themselves and their families. They all had children, who became college educated and beyond. They then had grandchildren and great grandchildren that give them great pride and joy. These survivors, many of whom met at displaced persons camps in Europe after the war, became each other’s families since most of their actual families were killed by the Nazis.

One aspect of their lives that I always noticed was their joy in living. Whenever they got together it was a party. They would dance and sing. They would tell jokes and laugh heartily. It was wonderful to be in the circle of their love. They built their family-friendship in the apartments of the Bronx and transported them to the suburbs of Westchester and New Jersey. They spent time together in Florida and would travel in large groups. A meal wasn’t a meal unless there were at least five couples. There was always hugging and kissing and admiring and supporting.

Today, sadly, time has taken many of them from us. The large groups that used to gather for celebrations are dwindling. Some of the second generation still connect, but not all of them are able to share the stories of their parents and grandparents. It’s time for the third generation to take the helm. Grandchildren need to be able to tell the stories of their grandparents. The survivors come from so many different countries and so many different experiences: camps, hiding, partisans, false identities. The stories need to be told and shared and remembered.

My father-in-law was reunited with his rescuer in 2009. They hadn’t seen each other since the end of the war. The Jewish Foundation For the Righteous connected them and brought Bronislaw  Firuta to the United States to recognize what he and his mother did to hide my father-in-law and his sister. The Firutas are recognized at Yad Vashem as “Righteous Among the Nations”. Our entire family went to JFK airport to meet Bronislaw Firuta and witness the reunion with my father-in-law, Joseph Bonder. I still get goosebumps thinking about that day. Without the Firuta’s help, my father-in-law probably would not have survived, he would never have met my mother-in-law and my husband would never have been born. Life would have been completely different. Instead, due to their incredible kindness and bravery, we have our own family filled with love and respect. We have a family who honors the history and struggles of our survivors building lives for themselves and others. Always giving of themselves and helping whenever they could.

Today, on International Holocaust Remembrance Day, I think of all the survivors and the trauma they experienced. I think of their struggles to live each day and move past their nightmare. I think of all they lost and all the world lost from the millions who were murdered. We cannot forget. We must educate others. Too many people do not know, understand or care to learn what happened in the Holocaust. It is our responsibility to be the voice and memory of our people. We must follow the words of Rabbi Hillel, “If I am not for me, who will be for me? And when I am for myself alone, what am I? And if not now, then when?” We must think of the “me” as “we”. We are the next generation, and it is our job to tell the story.