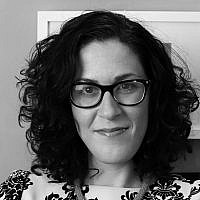 The Blogs
Leah Soibel
Apply for a Blog
Please note that the posts on The Blogs are contributed by third parties. The opinions, facts and any media content in them are presented solely by the authors, and neither The Times of Israel nor its partners assume any responsibility for them. Please contact us in case of abuse. In case of abuse,
Report this post. 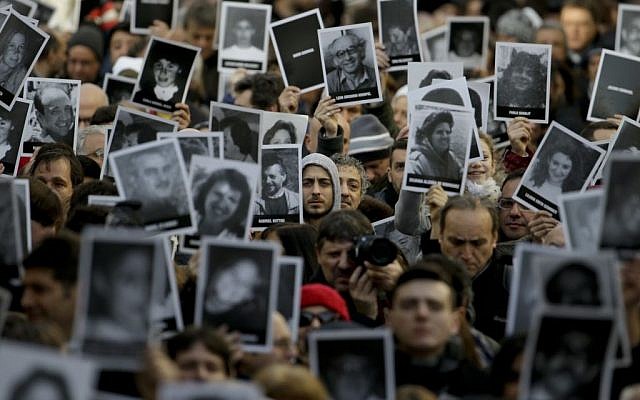 People hold up pictures of those who died in the AMIA Jewish center bombing that killed 85 people as they commemorate the attack's 22nd anniversary in Buenos Aires, Argentina, July 18, 2016. (AP Photo/Natacha Pisarenko/File)

The trial of a Hezbollah operative in Peru, together with the Iranian-backed group’s unprecedented political overtures and religious indoctrination efforts there, illustrate how far Tehran is willing to go to spread its influence in Latin America.

Thursday a Lima court will have the unique opportunity to say basta! –enough! — to Iranian influence in their country as it delivers the verdict in the case of Muhammad Ghaleb Hamdar.

Police found bomb making materials and sensitive photos of Israeli and Jewish targets in Peru at Hamdar’s home when they arrested the 30-year-old Lebanese national in 2014. Residue from bomb making ingredients were found on his person at the time of his arrest and he later admitted being a member of Hezbollah and entering Peru with false documentation.

But why are the Ayatollahs in Tehran deploying their proxies to the land of the Incas, a country best known by tourists for Machu Picchu and ceviche?

Iran’s interest in South America is nothing new, but its influence has significantly increased in recent years both directly and via its proxy Hezbollah. In Peru, Hezbollah is working alongside other extremist groups in order to wield influence in local politics with an eye on impacting the affairs of the Lima government at home and abroad. Just last year Hezbollah registered as an official political party in Peru. A bold move, one it hasn’t made in any other South American country. Yet.

As well as targeting the highest corridors of power in Lima, Iran is trying to make its mark among indigenous Peruvians. Peru’s Latina TV broadcast footage last summer of an Argentinean Sheikh trained in Iran, Ali Abdurrahman Pohl, praying with a group of indigenous Peruvian converts.

The group also posed with a picture of Iran’s Supreme Leader while chanting the phrase “Allahu akbar” amid the mountainous Peruvian landscape. The station said that since 2011 there has been a steady flow of Iranian religious figures to Peru seeking to spread Islam across the region. It said Pohl, along with another Argentinean cleric trained in Iran, are close associates of the Iranian mullah and former cultural attaché in Argentina, wanted by Interpol as mastermind of the deadliest terror attack in South America to date, the bombing of the Jewish cultural center (AMIA) in Buenos Aires that killed 85 people and wounded scores more in 1994.

Thursday’s verdict carries major implications reaching far beyond the Peruvian courtroom outward across South America. The results of the trial should signal other countries in the region that they too have the means to deal with their own Hezbollah threats and highlights the need for stronger anti-terrorism legislation in the region.

However there is truly a lack of information and awareness about Iran’s influence and the threat of Islamic terrorism in Latin America.

Fuente Latina (FL), a US non-profit working with Hispanic media covering Israel and the Mideast, revealed in May 2016 the ongoing influence of Iran and Hezbollah in Latin America to major media outlets in Peru and in other Latin American countries where Hezbollah is active. Fuente Latina facilitated dozens of interviews for top-tier media outlets with Joseph M. Humire, a Washington DC-based counterterrorism analyst specializing in Iran’s reach in Latin America. The media interviews about Iran’s activities triggered debate in Peru’s parliament and affected media coverage regionally. As a result of this media tour, Humire was called to be a witness in the case against Hamdar.

Hezbollah’s presence in Peru together with the Iranian-backed group’s political-religious effort there, as well as its Spanish language news network HispanTV broadcast in every country in Latin America 24/7, are just a few examples of how Iran is working tirelessly to win hearts and minds in the region.

Our attention and collective efforts to inform the public about Iran’s activities in Latin America should increase to match theirs.

Leah Soibel is founder and CEO of Fuente Latina, a US non-profit, non-governmental organization that removes geographic and linguistic barriers for global Spanish language media covering stories about Israel and the Mideast. With offices in Jerusalem, Madrid, and Miami, FL is the only organization of its kind engaging international Latino media in their language and in real time. http://www.fuentelatina.org/

About the Author
Leah Soibel is founder and CEO of Fuente Latina, a US non-profit, non-governmental organization that removes geographic and linguistic barriers for global Spanish language media covering stories about Israel and the Mideast. With offices in Jerusalem, Madrid, and Miami, FL is the only organization of its kind engaging international Latino media in their language and in real time.
Related Topics
Related Posts
Comments