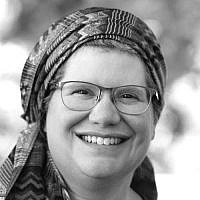 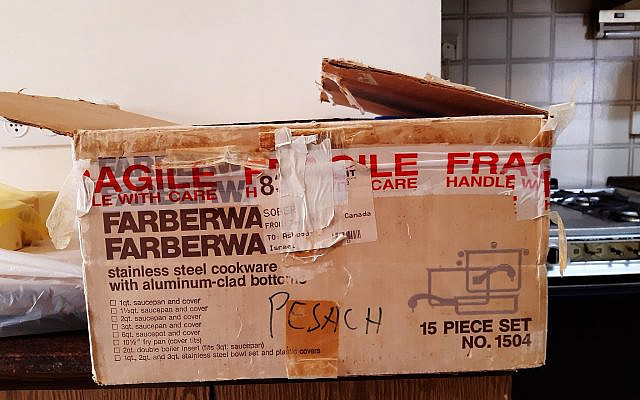 Growing up, I loved to come downstairs on the morning before Pesach and discover the kitchen shelves transformed. I loved eating that first breakfast on the special brown milchig plates I hadn’t seen for a year.

Now that I am grown up with a home of my own, I know that new dishes don’t magically appear on shelves overnight. I know that my father stayed up late, bringing heavy boxes up from the basement and unpacking them.

Yet there is still a magic to rediscovering the dishes I packed away a year ago.

No, we don’t actually recite that beracha on unpacking Pesach dishes, but I always feel it.

It’s partly the items that are beautiful, or meaningful, or both: wedding presents, family heirlooms, crystal goblets for seder night.

But it is mainly the reminder that we have lived another year.

In 2006, I packed up the Pesach dishes and put them away in our apartment in Toronto. Less than three months later, my first husband passed away. The next Pesach, the dishes stayed in their boxes and my daughters and I went to my parents and ate breakfast on the magical brown plates (which turned out to be an ordinary cheap set they bought as a young couple). When we unpacked the dishes for Pesach 2008, we were in our apartment in Jerusalem and I had just gotten engaged to my second husband.

So Pesach dishes have come to symbolize the fragility of life, its unexpected twists and turns, for better or for worse.

When we pack away the dishes after Pesach, we do not know when, or where, or whether, we will see them again.

The central narrative of the haggada opens with the story of Ya’akov, whose life took one unexpected turn after another.

And he sojourned there: This teaches that our father Ya’akov did not go down to settle in Egypt, but to sojourn there…

Ya’akov planned to stay in Egypt temporarily. He did not expect to spend the rest of his life there, beginning the process that would culminate in his descendants’ enslavement and – over two centuries later – the Exodus that we recount on seder night.

Today, God willing, I will unpack the Pesach dishes. Fewer dishes than I had anticipated, because we won’t have even a single guest. My parents and brother from the US, my married daughter and her family here, everyone we thought we would celebrate with, will of course be staying home.

Like Ya’akov, most of us are facing the unexpected this year.

…who by earthquake and who by plague…

Even if we said u-netaneh tokef with great fear and intensity six months ago, did any of us imagine we would be facing a literal plague today? It sounds so medieval, symbolic, metaphorical, like meeting a lion on a walk through the Jerusalem forest.

In the haggada, just a few paragraphs before we mention Ya’akov, we recall one of Avraham’s ordeals:

For the Holy One, blessed be He, calculated the end, to do as he had said to Avraham at the Covenant Between the Pieces, as it is said: And he said to Avraham, know surely that your progeny will be strangers in a land that is not theirs, and they will serve them, and they will oppress them for four hundred years. And also the nation whom they will serve, I will judge, and afterwards they will go out with great wealth. (Bereishit 15:13-14)

Generations before the slavery in Egypt began, God revealed to Avraham His detailed and frightening plans for his descendants, including slavery and Exodus.

A song separates the prophetic revelation to Avraham from its fulfilment at the time of Ya’akov and his descendants.

Ya’akov did not plan his journey to Egypt, or his lengthy sojourn there. But God did. The haggada reminds us that it was long foretold, as was the redemption. And not only the redemption from Egypt, but the promised redemption from the dangers and enemies we will face in every single generation.

This year, we are painfully aware of those who packed away their Pesach dishes last year and will not unpack them, whether because of Corona or for some other reason. Many of us are anticipating a seder very different from the one we imagined a month ago. Many people will be alone for seder, and I wish I could invite them.

The haggada reminds us that every ordeal holds the seeds of redemption.

Next year, in a rebuilt Jerusalem!