I didn’t know that bean soup could change your life until Erev Pesach. My friend Liami had secured me a spot as a guest as part of his No Oleh Left Alone program. I had participated in the Rosh Hashana program, and looked forward to meeting my hosts, a nice Chabad couple who were extremely welcoming. Ah, but the soup had other plans. After my surgery, foods have become tricky. This time, the soup had me in tears. After two hours of making peace with my maker in the confines of a restroom stall, I canceled my trip. Three hours later, I regretted that choice, because I was feeling much better, but it was already too late to catch the bus to Ashkelon. So, I shut everything down at work, and headed out towards home.

At the elevator, my co-worker, who had just purchased a classic 75 Volvo, offered me a lift to my station. At first I said no, because I knew it was out of his way, but who can pass up an opportunity to sit in a 40 year old car? As we drove, he asked my plans for the holiday. I told him the whole sordid story (minus the restroom prayers) and a look of horror came over his face. “You are coming with me to the desert!”

It turns out that my co-worker was friends with the leader of a guiding group called Walk About Love that hiked the Israeli National Trail twice a year. The group was getting together near Rahat to celebrate Passover in nature. And I said the two words that have gotten Jews into the position we find ourselves in at the present: Why not?!

We stopped briefly to pick up lettuce, date spread, and vast quantities of wine. We then drove for nearly two hours, until the land turned from concrete gray to green. Eventually, we turned off of Highway 6, and followed a path strewn with rock piles and pink crepe paper until we came into what can only be described as Woodstock with designer clothing. The hippies came to marvel at the Volvo.

Everywhere I heard, Gal! Gal! Gal was a whirlwind of activity. The right-hand man of the camp’s director, Rea Pasternak, Gal was helping people find their stuff, engaging in philosophical conversations, toting huge containers of food. I asked my co-worker how one person can deal with so much neediness. Apparently he loves it. Thank G-d for the Gals of the world I suppose.

Not that Rea was any slouch in the hospitality department. Within minutes, both Rea and his wife knew my name, and were helping me fit in, despite my obvious distrust of nature. At one point, I asked, more out of hope than an actual expectation, if there was an indoor plumbing area. Instead of politely telling me to stick it where the sun don’t shine, Rea patiently extolled the virtues of feeling the wind between your legs as you answered the call of nature. I’m still not entirely convinced, but at least he persuaded me to give it a try, so that I didn’t end up with a burst bladder.

The seder was just the right length, which means it was still too long, but not painfully so. Rea led us in Hebrew, and a delightful ba’alas teshuvah (from one of those little towns in New York that you only know if you’re from New York) read the English. We drank, talked, and laughed. I lost track of what happened to the Afikomen. My co-worker and I talked with the New York girl and she tried to convince us of the wisdom of religion. We smiled and wished her well, and asked her to check back in with us in 20 years. I hope she found her path, but I wouldn’t be surprised if she is still traveling. Finally, we slept, huddled under blankets and sleeping bags. 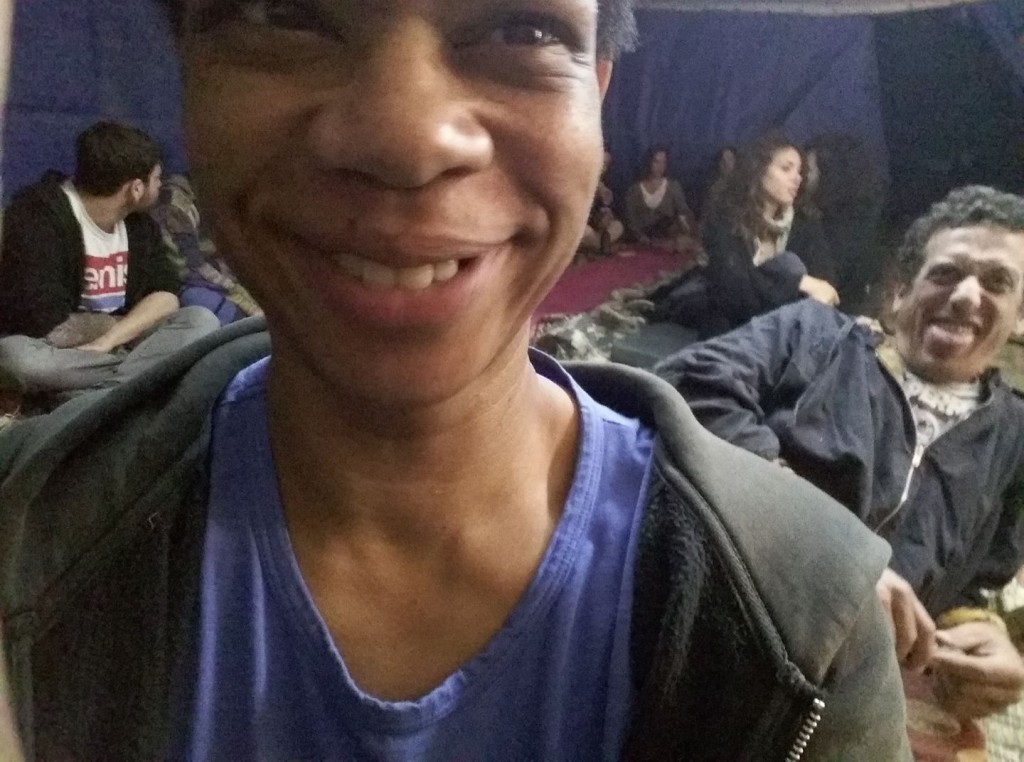 In the morning, fortified by tea and half a cube of sugar, I watched as color slowly slipped into the world. The sun brought out the eccentrics, and I dozed and kept half of my mind on the exploits of a German girl, who looked 45 and said she was 32. The other half of my attention was directed towards a Dutch man who had spent 10 years studying Aikido, while jamming with African jazz musicians, and romancing women from Suriname. At one point, the German girl said we were just down the road from the Rainbow Festival. This led to a flurry of phone calls, and hastily made arrangements.

As the last of the Technicolor dripped away from the sky, my co-worker said it was time to leave. It was surprising how soon we reached Tel Aviv from the edges of a Bedouin camp, where young boys tending sheep looked at us with hard and suspicious eyes, shying away from our cameras. Once home, I rushed to tell my circle about my amazing experience. As soon as I explained where I had been, one of my friends cut me off. “Did you know that’s right by Rainbow?”