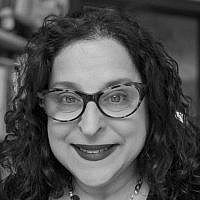 The Blogs
Anna Urowitz-Freudenstein
Apply for a Blog
Please note that the posts on The Blogs are contributed by third parties. The opinions, facts and any media content in them are presented solely by the authors, and neither The Times of Israel nor its partners assume any responsibility for them. Please contact us in case of abuse. In case of abuse,
Report this post.

This year, Pesach is complicated. In the midst of a pandemic, we have to celebrate a holiday that has its own inherent complexities. This year, it is also immediately preceded by Shabbat, and therefore outside of Israel we have a “three day yom tov“.  With all of these potentially confusing details, it is a comfort to be able to refer to written texts and manuals printed by various Jewish institutions to guide us. Just as today not all of the esteemed teachers and rabbis who compile these resources agree with each other, this was also true with the rabbis of the Talmud.

A disagreement concerned the wording of prayers, said on Shabbat and holidays, was debated in the Babylonian Talmud in Pesachim 117b.*  In the time of the Talmud, the exact wording of some of the prayers was not as fixed or consistent as it is today.  This led Rava to contest the Elders of Pumbedita regarding the ending of the last blessing of both the kiddush over wine and the Amida prayer. Rava’s main disagreement with them centered around the wording of the end of the Amida for Shabbat, which he claimed should be “Who sanctifies Israel”,** in contrast to the phrase “Who sanctifies the Shabbat”, which was the opinion of the Elders of Pumbedita (and the one that is used today). Rava’s claim was that since the Amida was done in public, as part of a community, it was an appropriate time to celebrate and even sanctify community. By extension, he explains that sanctifying Shabbat should be done at the end of kiddush, a formula that is agreed upon by all.  These words are appropriate to be said around the family table, at home, because it is clear that Shabbat exists as part of God’s plan for the creation of the earth and for humanity, and therefore it is not necessary to assert them in a communal setting. Rava is making a clear distinction between prayers that are acceptable in the home, versus ones that are meant to be recited in community.***

This stark contrast between the home and the community is immediately contested by the gemara, as the reverse of the categories that he presented is evident in Jewish life as well. We, too, can all recall when kiddush was recited in community with sponge cake and herring, and even in pre Covid times, we know that the Amida was often recited at home alone, without community. Rava had an answer to this challenge. It was –

The gemara does not respond to Rava using argumentative words. There is, after all, logic to his statement. However, it goes on to recount a story that demonstrates that Rava did not insist upon his version of the prayers.  He agreed to conform to the opinion of the Elders of Pumbedita, sanctifying Shabbat both in the home kiddush and the public Amida.

Pesach in Temple times, in contrast to Rava’s desire to separate and consecrate these ideas of the public versus the private, was the holiday that melded these two ideas together.  The Korban Pesach was chosen by an individual, and then usually consensually shared with family members and/or neighbours.  It was then sacrificed in public, only to be later consumed with much ritual in private.  The private home ritual needed aspects of it to be performed in the Temple in public; one of these realms alone was not enough.   This year, for many of us, Pesach seder rituals and traditions will represent a tension between our private and public selves. Who should we invite in; should we go out?  How will these decisions impact the ‘success’ of this year’s seder and sedarim in the future?  How will this tension impact our physical and spiritual health?

What does the notion of the distinction between public and private ritual mean in the age of Corona? We have become accustomed to making kiddush with fewer people (or no people) next to us to say amen. We have blown masked shofars on street corners, prayed in tents, danced alone with the Torah only in our hearts, lit chanukah candles on zoom, read the megillah while leaning out the window and and now prepare for seders a second time, comforted at least by the fact that Elijah is still permitted to visit. This blurring of the distinction between private and public places in matters of ritual has been felt by women for a long time. Not needed to count for the minyan, squished into a women’s section, silenced, bound by the biological constraints of difficult pregnancies and babies who are fussy when breastfeeding; public prayers are often relegated to the private realm.

We (women) have known for a long time that our prayers and devotions are meaningful at home too. That being said, we too, long for the return to, and our chance at, participation in the public ritual realm. Pass us the sponge cake. Pass us the Sefer Torah. Let us all find meaning in, and opportunities to, sanctify Shabbat and our communities. May we be able to express this soon, in our hearts and sung out loud, as individuals and all together.

———————————-
*I am blessed and proud to have studied this talmudic text as part of the Daf Yomi cycle with Rabbanit Michelle Cohen Farber on her Hadran podcast.

**This formula is similar to, but not the same as, the blessings for Pesach and other holidays, that ends “Who sanctifies Israel and the seasons”.  This formula is also discussed in this section of the gemara.

***Of course, there are certain parts of the prayer service that are only reserved for the times when there is a minyan present.  That is not the focus of the discussion here in the gemara, nor here in this piece of writing.

About the Author
Dr. Anna Urowitz-Freudenstein received both her Ph.D. in Midrash and her M.A. in Ancient Judaism from the Jewish Theological Seminary. Her dissertation investigated the workings of Midrash focusing on texts that mention individual women. She has taught university courses both in person and on line and was a contributor to The Torah: A Women's Commentary. She currently teaches at TanenbaumCHAT, where her students know her as Dr. U-F and she is Head of the Department of Jewish Thought. One of the courses she teaches and developed is "Gender and Judaism". Dr. Urowitz-Freudenstein lives in her hometown, Toronto, with her husband and three children.
Related Topics
Related Posts
Comments