Imagine: After a few verses in the Book of Exodus and Pharaoh’s daughter — nameless in the narrative — disappears from the Biblical story. Just compare it to the 14 chapters devoted to Joseph, more than one-fourth of the entire Book of Genesis.

And yet, by the time Jewish tradition has finished (and is still finishing) her story, she has a name, a Hebrew one (Bityah, daughter of God – alternatively: Beloved One of God), was the only firstborn to survive the 10th plague, and one of the fortunate nine mortals to have entered Paradise alive, in such glorious company as the likes of Elijah.

The Midrash even adds that Moses had many names, but the one he is forever known as is the one given him by his rescuer, Pharaoh’s daughter.

So much is missing in Exodus, so many gaps, unexplained details. Naturally, the Midrash of hundreds of years’ duration, will add, embellish, create “facts” as well as miracles to teach us how this brave young woman saved Baby Moses, and as a result, here we are today, three thousand or more years later, Jews in Seattle, Jacksonville, Mississippi, London, even Katmandu, Bangkok, and Singapore. 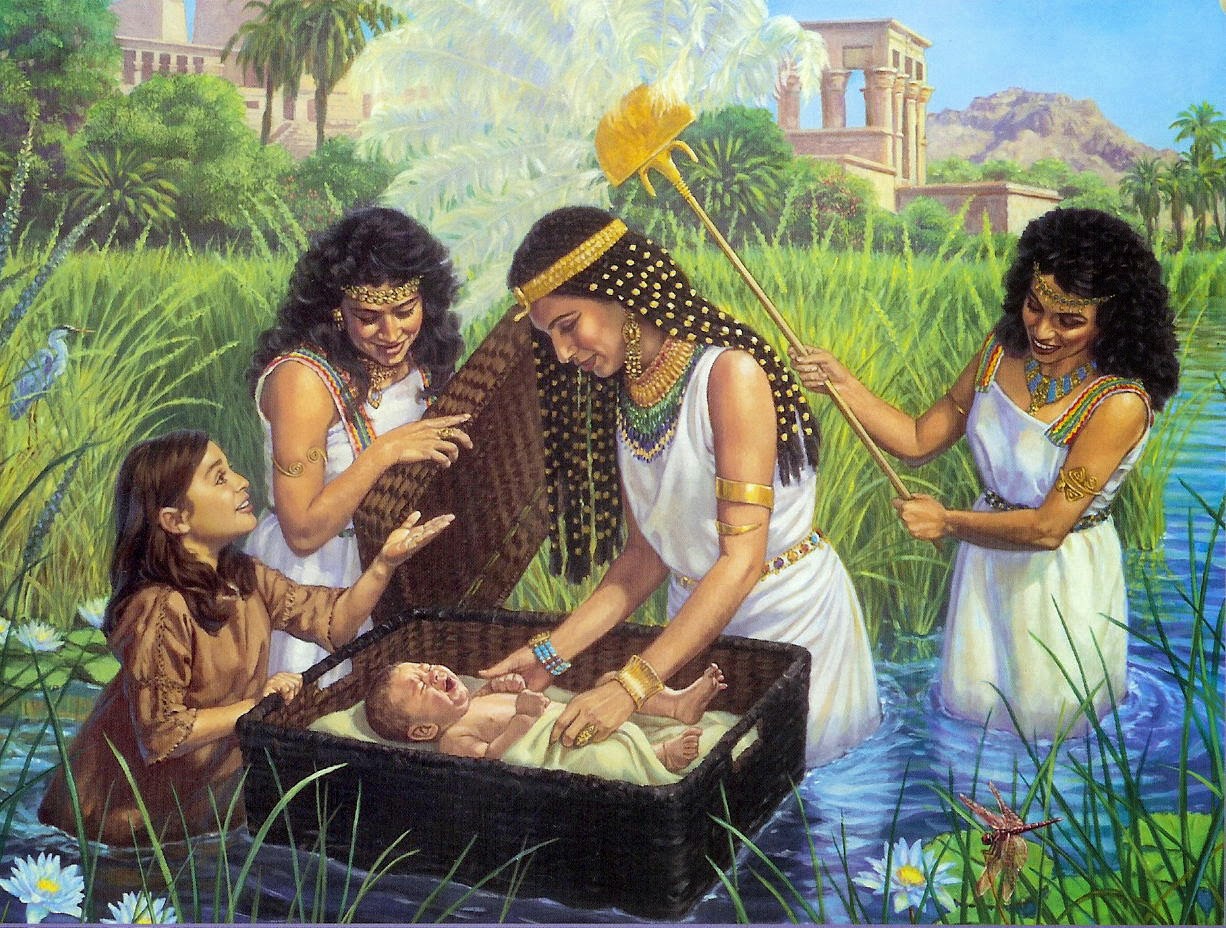 The very first thing we have to establish is that we would never be here if this were the story of Pharaoh’s son. Though most certainly we may assume that Pharaoh’s wife or wives gave birth to many children, I picture her as the only daughter. Not that Pharaoh didn’t want sons; he had to have a male successor. But it may very well be that after two, several, many sons, he finally was given a daughter.

I see her as sitting on this all-powerful ruler’s knees as a young child, playing, making childish prattle, making this one-of-many-gods of all Egypt smile, laugh, do silly things. Fine her a pet co snuggle with at night, possibly getting down on the floor of the palace to play card kid card games or jacks with her.

I see her as the dear one, the favored one, an early model of Daddy’s Little Girl who wrapped him around her little finger. How else explain him tolerating having a Hebrew child grow up in his palace (some say for 20 years, others for 40).

And to tolerate for the two or three years he was breastfed, a wet nurse who spoke Egyptian with a Hebrew accent and who most definitely looked like a Hebrew. It may be that Yocheved was kept on as a kind of governess.How else to explain that the Prince of Egypt knew that the slaves were his brothers and sisters.
But even if her terms of employment were only those two or three years, how much could she have taught him about what it is to be a Hebrew whose single and singular God revered Life and rejected the worship of death and the dead? There was no Shema yet to recite with the infant before he went to sleep. What possibly could his birth mother transmit to him in that brief span of his life to so intimately identify with the Hebrews, despite being immersed in the grandeur and trappings of Egyptian royalty.

When he was 19, did he remember something from infancy much as 50 years later some people can still recite all the words to the Rock and Roll songs “Wake Up Little Susie”, “Heartbreak Hotel”, and “It’s My Party and I’ll Cry If I Want To”. Recalling the TV show “Name That Tune”, the contestants had to give the name of the song after hearing only the first one or two notes.

Yocheved must have dug deep down into the Hebrew consciousness to make such powerful memories. There are still so many unknowns about the human mind, as is discovered in our day, for example, how people with Alzheimer’s disease who cannot remember their own name still connect to reality through music, through the presence and contact dogs and cats and baby dolls.

Especially if we accept the theory that she was kept on as an au pair and did not totally give up Moshe to Pharaoh’s daughter when he was only two years old, she had innumerable opportunities to implant in his Hebrew soul that that’s who he really was, a Hebrew.

The text itself says that when the child grew up, Yocheved brought him to pharaoh’s daughter, apparently implying that for several years he actually lived at home with his natural parents. But what did “grew up” mean in that ancient society? Age 12? 10? Think of young children the sweatshops of England not so long ago. And think of our beloved bar and bat mitzvah drop-outs, then living as Jewish adults living with a religious school education. Engulfed in the enormous pull of the world of the Egyptian palace, how well could he hold on to her teachings?

But then, even if after that Yocheved was kept on as a nanny, there were few intimate moments comparable to that of when she nursed him. Egyptians were everywhere, listening, watching. And if we accept the Midrash’s statement that he was breathtakingly gorgeous and everyone wanted to be around him, it would still be difficult for Yocheved.

These are just some of the scenarios, and after reviewing them, a Torah student wonders why there is virtually nothing in the text about these crucial years of his life.

There are more unexplained details, most of which the commentators and geniuses of Midrash “solve”; Why did Pharaoh’s daughter go down to the Nile to bathe? Were there not the most elaborate places to bathe in the palace? (Think of mansions of the Rich and Famous with their 14 marble and gold bathrooms.) Furthermore, can there be any doubt that the Nile swarmed with crocodiles and various other deadly-to-humans creatures? (Commentators: It was really a small lagoon off the Nile, clear and placid.)

CONTINUED NEXT WEEK, IN PART TWO