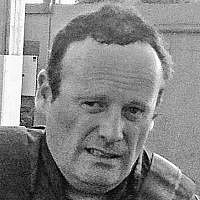 The Blogs
David Katz
Apply for a Blog
Advertisement
Please note that the posts on The Blogs are contributed by third parties. The opinions, facts and any media content in them are presented solely by the authors, and neither The Times of Israel nor its partners assume any responsibility for them. Please contact us in case of abuse. In case of abuse,
Report this post.

As a proudly born and bred Londoner, the images of the brutal murder of Drummer Lee Rigby last week in Woolwich at once broke my heart and transported my mind back to my hometown. I remember vividly, standing on those very same streets watching the first time Islamic Fundamentalism was allowed to be preached in London’s public spaces. I see from that day, and the pictures I took, a direct line to last week’s abhorrent and vicious murder committed in broad daylight.

Preacher of hate Abu Hamza al-Masri outside the Israeli embassy in London who was responsible for radicalizing many young British Muslims.(photo: David Katz)

Of course, many of the Muslim community in Britain are first or second generation immigrants. Like me, their parents and grandparents were given refuge in a country that opened its doors. Like me they had received an education, medical care and many more state benefits than when our families first arrived. Like me, they were lucky enough to be raised in a country with freedom of worship free from persecution – unlike our older generations.

Unlike me, they were filled with hate; radicalized by people who only understand violence and death and hating everything about the freedoms of the country they were lucky enough to be citizens in.

Outside of the Israeli embassy in London in 2003. As i was taking this i asked a police officer why they were being allowed to break the law by burning an Israeli flag, he told me to stop photographing them or he would arrest me for insighting them! (photo: David Katz)

Growing up in a multi cultural area on the cusp of East London, I was lucky enough to mix with people from many different religions and ethnic backgrounds. These were by and large people who worked hard, maintained their traditional beliefs while striving to adapt and contribute to the society around them.

It was not until the early 1990s through my work as a national newspaper photographer that I encountered radical Muslim fundamentalism.

The first Gulf war had just finished, and the Bosnian Serbian conflict was beginning in the former Yugoslavia, and I found myself at a rally in Trafalgar Square in the heart of London that was being addressed by Cat Stevens – a massive pop star in the 1970s – now known as Yusuf Islam.

As a fan of his music…. I was actually looking forward to hear what he had to say about why he had given up superstardom and all that goes with it, and become a devout Muslim.

Not in Gaza or Ramallah, but in Central London not long after 9/11. (photo: David Katz)

Instead, what I heard in front of hundreds of people, many of whom were young British born Muslims, was a tirade against Israel and the Jews. He with other speakers that day, target Israel as the cause of all evils and every war. They rolled out the age old anti-Semitic slurs of controlling the media and the economy, and rallied that Israel should be destroyed. But that was not all. It was made clear time and again that unless Britain itself, were to come under the Sharia law, the Brits should be put to death by those ‘accepting God’s will’.

By that time I was already quite an experienced photographer and had seen a lot, yet even I could not believe what I was hearing, nor that I was hearing it on a loud speaker, openly, in the heart of central London in front of the police.

For the next 15 years until I made Aliyah, through my work I attended, many demonstrations, marches, rallies and private meetings that were addressed by preachers even more radical than Yusuf Islam.

I watched as they were allowed, unchallenged by the authorities in Britain, to burn Israeli and American flags in public, wear mock suicide belts, and threaten death to anyone who disagreed with their ideology.

Trafalgar Square London, in April 2002 an Islamic fundamentalist wears a mock explosive suicide belt in full view of the police while a friend sets fire to an American and Israeli flag. (photo: David Katz)

I listened to their rhetoric in private and in public, sometimes some would talk to me, sometimes they threatened me physically, but mostly they just showed complete disdain towards me for either working for the ‘Jew run British press’ or for one of the various intelligence services that they thought were watching them.

The unfortunate thing was that the British intelligence services were not really watching them, well at least, not taking them seriously. There was a seemingly widespread fear of trespassing on the sanctity of political correctness, and risk upsetting the wider mainstream moderate Muslim community.

The authorities completely underestimated the fact that unless something was done to stop the radicals infiltrating the country’s mosques, terror would visit the streets of the UK – not by the hands of foreign enemies, but terrorists grown from within.

This happened on the 7th July 2005 when four British born Muslims, men with careers and families, blew themselves up together with a London bus, three Underground trains, and 52 civilians who just happened to be in the wrong place at the wrong time.

This should have been a wakeup call, even though the police had denied publicly that they had known homegrown British Islamic fundamentalists were at the stage that they could carry out a terrorist attack on this kind of scale, privately they knew.

Unfortunately the damage has been done and whatever great work the authorities in Britain are doing now is perhaps too little too late, at best they are just playing catch up.

A young British Muslim child outside the Israeli embassy in London in October 2000. (photo: David Katz)

The fact is that there are thousands more radicalized British born Muslims like Michael Adebolajo and Michael Oluwatobi Adebowale, both of whom were being radicalized in the time I was watching the rise of Islamic Fundamentalism in England. There are many more who have been coached and groomed to murder and terrorize in full view of the public – and understand the power of imagery and the media to encourage others to follow in their footsteps.

Unless the moderate Muslims in England and throughout the world are prepared to stand up to these fanatics who have hijacked their religion many many more people will die.