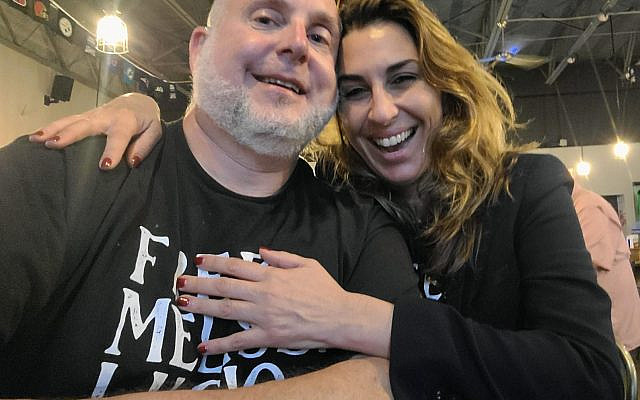 Photo Source: Abe Bonowitz. The image is available to be published commercially, in accord with copyright law. Pictured: Abe Bonowitz, Director and Co-Founder of Death Penalty Action, and Sabrina van Tassel, reporter and director of the film “The State of Texas vs. Melissa,” as they celebrate after hearing news of the stay of execution for Melissa Lucio.

In rabbinic parlance, this is loosely translated as “Saving a Life.” Little is more important in Jewish tradition than just this. Most other commandments can be set aside in order to do all that is necessary to save a human life. As we learn: “The preservation of human life takes precedence over all the other commandments in Judaism.”  https://www.myjewishlearning.com/article/saving-a-life-pikuach-nefesh/

When it comes to Jewish abolitionists like myself and the members of L’chaim! Jews Against the Death Penalty, “pikuach nefesh” might as well be a mantra. If you remain unconvinced, I invite you to watch this compelling video by my colleague and fellow Death Penalty Action Board Advisor Rabbi Dr. Shmuly Yanklowitz, as he discusses how pikuach nefesh plays into what we do as Jewish death penalty abolitionists: https://youtu.be/2_Ylw3EhUdc I stand firmly with my colleague Rabbi Yanklowitz. As our tradition teaches: “Whoever destroys a life, it is considered as if he destroyed an entire world. And whoever saves a life, it is considered as if he saved an entire world.” – The Talmud (Jewish Oral Law) Sanhedrin 4:5)

Hospital chaplains like myself see the value of “pikuach nefesh” regularly at our places of work, as doctors, nurses and all members of the medical team rush to the aid of someone when a Code Blue is called, doing all that is humanly possible to save that person’s life. For death penalty abolitionists like myself, the idea of taking daily actions to save the life of individuals condemned to state-sponsored murder –  such as making phone calls to governors and parole boards, writing op-eds, garnering signatures for petitions, and posting on social media –  is no different. For example, L’chaim member Karine Omry from her home is Israel is one of the founders of The Death Row Soul Collective, which advocates every day against all state killings and gives a voice to those in line for execution. Please visit their website here: https://www.deathrowsoulcollective.com/ Indeed, even as I write this, I am placing calls to CHABAD rabbis in Missouri to ask them to intercede with their governor to spare the life of our pen pal Carman Deck, the next in line for state murder there on May 3rd.

Some might believe that individuals like Carman who are indeed guilty of capital crimes are not worthy of such efforts. We would respectfully disagree. Kal v’chomer, all the more so, we feel compelled even more so to do this in order to ensure that the cycle of violence to which that guilty individual has contributed in his or her actions is not perpetuated in our names. By seeking to save this individual’s life, we are in effect ending this cycle of violence and killing. We are respectfully rescinding our invitation to Malakh HaMavet – the Angel of Death. Others might argue that by putting to death these individuals we in fact are doing our part to save lives by deterring others from committing similar heinous crimes. If you feel this way, we invite you to read this report written by our colleagues at the well-respected organization, the Death Penalty Information Center, which demonstrates the fallacy of the very idea of “deterrence:”  https://deathpenaltyinfo.org/policy-issues/deterrence

And if you still remain unconvinced, then we invite you to consider the idea of doing all one can to save an innocent life. If you think innocent people are not put to death in America, think again. Indeed, it is believed that one out of every nine individuals on death rows in this country is actually innocent. (https://deathpenaltyinfo.org/facts-and-research/dpic-reports/dpic-special-reports/dpic-special-report-the-innocence-epidemic) Since 1973, at least 187 people who had been wrongly convicted and sentenced to death in the U.S. have been exonerated .https://deathpenaltyinfo.org/policy-issues/innocence For testimonies from a few of these exonerated human beings, watch this five minute video from their organization, Witness to Innocence – an inspiring collective that should not have to exist in any country, but continues to gain more and more members here in these United States: https://www.witnesstoinnocence.org/who-we-are?fbclid=IwAR2XOTswUvgQ0Z-W3MsKgMQ6bEWWguh9DCrjlJKoYT6moRJYE9pgGoU3Aog )

One of these innocent individuals was spared this horror this past April 27 – Yom Hashoah. Texas was about to execute our pen pal Melissa Lucio on that day for a crime that she did not commit. https://blogs.timesofisrael.com/texas-to-kill-innocent-woman-holocaust-meml-day/

What did individuals in the Jewish community do to stop this?

First, consider Sabrina Van Tassel, a director and reporter who created the masterpiece film “The State of Texas vs. Melissa.” This documentary helped show the world all the evidence that was not allowed to be admitted into trial – evidence that eventually led 5 jurors and one alternate on her case to recant their guilty verdict. Here is a link to that life-saving endeavor: https://youtu.be/CydsV7ykL6A Ms. Van Tassel is Jewish and is a member of our group “L’chaim! Jews Against the Death Penalty.”

Consider as well our Jewish lansman Abe Bonowitz, the co-founder and director of Death Penalty Action (DPA) https://deathpenaltyaction.org/. Abe has been at the forefront of protesting executions for decades. He and DPA actively protest against all executions. Informed by his Jewish values, and through DPA, Abe created an international campaign to help mobilize the world against Melissa Lucio’s execution. And not only is Abe a member of “L’chaim,” but he also is a co-founder. Indeed, I myself would not be in this fight for life without the inspiration of Abe.

I have no doubt that the efforts of Sabrina van Tassel and Abe Bonowitz changed enough hearts and minds in Texas to create a level of political pressure that led to Governor Abbott nudging the Texas Court of Criminal Appeals halting the execution of Melissa Lucio just days before her Yom Hashoah date with death. Their efforts were joined by those of countless others, including members of her outstanding legal team – a team that includes Vanessa Potkin of the Innocence Project, who also is Jewish. Without their efforts, I greatly doubt that Melissa would have been spared. I say this having known personally others who have been innocent…and executed.

When patients are brought into a hospital’s ER, there is a triage to determine whose needs are greatest and which patient needs the most immediate assistance in order to ensure lives are saved. As a former prison chaplain myself and someone in touch with many in line for state-sponsored killing across this nation, I cannot help but see the American prison system as this “patient.” When I personally seek to “triage” which aspect of this “patient” needs the most immediate attention in order to save its life, the death penalty flashes before my eyes with red flags of blood. When it comes to reforming our system of “corrections,” there is no greater immediate need than ENDING the state-sponsored killing of individuals in that system.

It is a profound honor to know that fellow Jews like Sabrina van Tassel and Abe Bonowitz are on the frontlines of this emergency triage, lifting their voices and doing all they can to save innocent lives, like that of Melissa Lucio. In so doing, they live the Jewish ideal of pikuach nefesh and they honor all the Jewish people. Kol Hakavod to them, and to the many others – Jewish and not Jewish – who have helped save Melissa Lucio’s life. May their efforts be models for us all for every individual in line for state-sponsored killing.