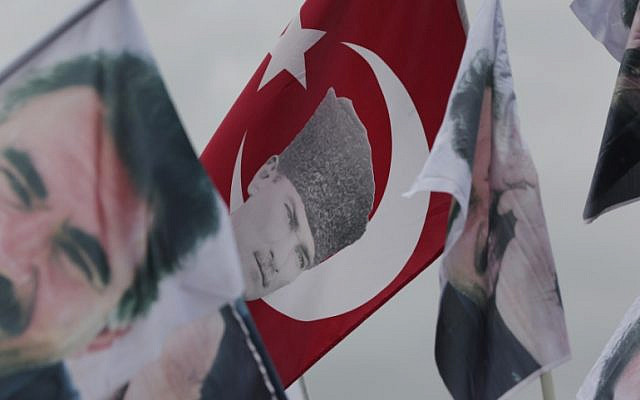 Introduction
Kurdistan Workers’ Party (PKK), is a militant Kurdish libertarian socialistic organization founded by Abdullah (“Apo”) Öcalan in the late 1970s. Although the group initially espoused demands for the establishment of an independent Kurdish state, its stated aims were later tempered to call for socialistic autonomy- confederalism with the Iranian and the Turkish states. PYD themselves and the official sources in the U.S. admitted on many occasions that the PYD is the Syrian branch of the PKK. The U.S. then-defense minister Ashton Carter confirmed the substantial ties between PYD and PKK during a testimony before the Senate panel on 28 April 2016.

Background
The name Abdullah Öcalan may not sound familiar to most people, but is known to everybody in Turkey. Writing in KurdishAspect.com in 2007, a columnist named Sosun Welat explicitly accused Öcalan of serving as an agent for MİT and blamed him for perpetrating a “systematic betrayal and treason to [the] Kurdish cause.”
“Öcalan played a double agent role for years,” Welat wrote. “His rise and fall was well planned and controlled by [the] Turkish state. He and PKK provided cover for [the] Turkish state to … destroy [the] Kurdish heartland, its way of life, culture, language.”

Welat and other observers believe that prior to the forming of the PKK, in the mid-1950s, Turkish intelligence infiltrated Kurdish activist groups and helped establish their Communist credentials, thereby providing a legitimate excuse to oppress Kurds in the name of preventing the spread of Communism (which would, of course, please Turkey’s then-new allies in Western Europe and the U.S.).

Then in the 1970s, so the theory goes, Turkish intelligence facilitated the emergence of PKK, hoping to use it as a counterforce that would weaken other Kurdish insurgents. “MİT planned to split Turkish leftist groups by creating (its own) Kurdish leftist group, PKK — but apparently it got out of control,” said Emrullah Uslu, an analyst at the Jamestown Foundation and a professor of political science and international relations at Yeditepe University in Istanbul.

In 1979 Öcalan became close to the Syrian Baath party, and he departed Turkey for Syria, where PKK established connection with militant and Palestinian terrorist organizations. In the early 80s made a deal with Palestinian groups for them to provide PKK military training and support. In the early 80s, Kurdistan Democratic Party also made a huge mistake, by allowing the PKK militants to create camps in Qandil mountains, from which PKK launched an armed campaign against Turkey in 1984. This became the start of decades with terrorist acts committed by the PKK in Turkey and across the world. The PKK subsequently perpetrated frequent acts of terrorism and conducted guerrilla operations against a range of targets, including government installations and officials, Turks living in the country’s Kurdish regions, Kurds accused of collaborating with the government, foreigners, and Turkish diplomatic missions abroad.

In the 1990s, the PKK began shifting its goals away from the pursuit of independence outright toward the (in theory) attainment of autonomy and equal treatment within Turkey. Öcalan in particular began articulating a social theory that abandoned the concept of a nation-state as a solution to Kurdish issue.

According to Öcalan’s former right-hand-man, Hüseyin Yıldırım, “Öcalan controls the PKK and the ‘deep state’ controls Öcalan.” As Yıldırım sees it, “Öcalan made an agreement with the ‘deep state’ at İmralı [prison] to save his life.”. This was also indirectly confirmed by Öcalan himself On Aug. 8 2008, when Öcalan addressed the prosecutor of the Ergenekon (Turkish deepstate) trial, there it was made clear that unless the deep state in Turkey has been exhausted, the PKK will survive. It was made clear by Öcalan that the deep state supports PKK violence. As long as the deep state is alive, the PKK will not vanish. If democracy prevails in Turkey.

Assad and PYD
The PYD (Democratic Union Party) emerged as a Syrian “Kurdish” party in 2003, even though forming political parties is illegal under Ba’athist one party rule. Syrian intelligence saw in it a mere restructuring of old PKK members under a more localised leadership, and therefore decided to give them their support. In 2015 Syrian President Bashar al-Assad has admitted his regime provided weapons to PYD, “The Kurds are fighting the terrorists with the Syrian army, in the same areas… [They are supported] mainly by the Syrian army, and we have the documents.
“We sent them armaments, because they are Syrian citizens, and they want to fight terrorism. We do the same with many other groups in Syria, because you cannot send the army to every part of Syria. So, it is not only the Kurds. Many other Syrians are doing the same,” Assad said at the time.

Syrians have always been integral to the PKK. Although the regime oppressed its Kurds, it also encouraged them to join the PKK to deflect their local aspirations. An estimated 7,000–10,000 did so. The regime also permitted the PKK to open a Damascus office and to establish training camps in Lebanon’s Beqa Valley under Syrian control.92 A noted Kurdish analyst contended that more than one-third of PKK members are Syrian, according to the Washington Institute.

In 2012 PKK founded the People’s Council of Western Kurdistan, a locally elected assembly to provide social services. The Movement for a Democratic Society (TEV-DEM) was established as an umbrella organization incorporating the PYD, youth movements, and other PKK organizations. But its key task was to negotiate an ultimately failed powersharing agreement between the PYD and parties loyal to the kurdish cause. In reality, these organizations are PYD facades. This multitude of front organizations has confused Syrian Kurds and contributed to their political apathy. For their part, U.S. officials have noted that there is no difference between the PYD and YPG and the PKK.