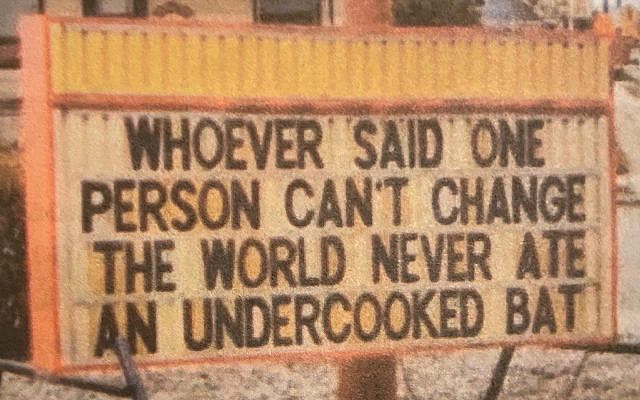 When you believe in the Torah as a practicing Orthodox Jew, you see the connection between the section of the Torah that is read in the synagogue each week (called the Parsha) as a predictor of biblical times.

So an Orthodox Jew turns to the Torah to try to make sense out of what is going on. This week, because of the special intricacies of the Hebrew calendar we read two parsha sections: Tazria and Metzora.

34) When you come into the land of Canaan, which I give to you as for a possession, and I put the plague (נגע) of leprosy in a house of the land of your possession;

35) Then he that owns the house shall come and tell the priest, saying: as if it (כנגע) were a plague there seems to be in the house.

Rashi (our main commentator) says on verse 34, this is GOOD tiding when there is a plague for the Amorites had hidden treasures of gold in the walls of their houses and when the plague was declared the house had to be torn down and the GOLD was discovered.

What is the difference? The difference is while it seems like something is a plague, it might turn out to be a pleasure. While these are hard words to take while we are under the current plague, but Jews are used to taking lemons and turning them into lemonade.

No greater case can be made against the plagues of the world on this Tuesday the 21st of April (Nisan 27, 5780) Yom HaShoah (Holocaust Remembrance Day.

Yom Hashoah is a day set aside for Jews to remember the Holocaust. The name comes from the Hebrew word ‘shoah’, which means ‘whirlwind’. Yom Hashoah was established in Israel in 1959 by law. It falls on the 27th of the Jewish month of Nissan, a date chosen because it is the anniversary of the Warsaw Ghetto uprising.

Everyone knows this was the worst plague on the Jewish people, yet the Rabbis teach us that we were privileged to come back to the land of Israel, because of the guilt of the world (and of course G-d said it was time to come home).

Rambam concludes that there are two possible causes of worry, the past and the future. A person worries about what was and what will be. Rambam writes, “Worrying about the past, has no benefit and someone who sighs and frets over something that has already passed, is senseless and foolish. Bad enough that such a person once had a problem, but he makes things worse by worrying about it after it has passed and gone.” (Guide for the Perplexed)

Our goal is to be sensitive to the needs of society and to be free means to be helpful and considerate of others. In this context, CORONA has caused us to show sensitivity to the elderly and vulnerable populations. All of us are self-isolating in our homes not just because we are afraid of being infected, but mainly because being outdoors endangers other people. This demonstrates incredible consideration and regard for the elderly and vulnerable populations and this is one of the signs of our being truly free, according to Rav Soloveitchik.

Just as the CORONA epidemic began with only one person and spread to the entire world, so too, the good we do has an effect on the entire world. CORONA demonstrates that individuals have tremendous influence over the whole world. This influence can be used for good, or it can be used for evil. All of us have a unique and special mission in life to change the world for the better, ONE good deed at a time!

WE Never know what G-d has planned for us–like this story:

A Heart to Heart

Sidney was thinking about how good his wife had been to him, and how fortunate he was to have her. He asked G-d, “Lord, why did You make her so kind hearted?”

G-d responded, “So you could love her, my son.”

“Why did You make her so attractive?”

“Why did You make her such a good cook?”

Sidney thought about this. Then he asked, “I don’t mean to sound ungrateful or anything but…why did You make her so unintelligent?”