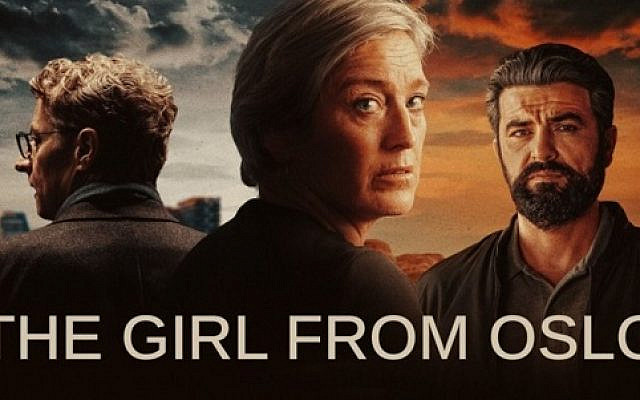 Two young Israelis and their Norwegian friend are on their way home from a holiday on the beaches of Sinai when they are kidnapped by Daesh terrorists. Held captive in mountain caves and Bedouin encampments, they are threatened with death unless 12 Islamic State members are released from prison, including a terrorist leader being held in Norway.

This is the beginning of the Netflix series ‘The Girl from Oslo’ (2021), created by Kyrre Holm Johannessen and Ronit Weiss-Berkowitz. Presented as the next big Israeli dramatic thriller to hit the streaming screens, the series is as much in need of a rescue as the captives held in Sinai.

The ominous score; the panoramic scenes of Jerusalem from above; and a multitude of scowls, secrets, and scandals give the series the air of a soap opera. Ten episodes are a bit much. The terrorists should have been killed and the prisoners released much sooner.

The series stars Andrea Berntzen as the kidnapped red-cheeked Norwegian girl, Pia; Anneke von der Lippe as the mother who would do anything, even reveal her innermost secrets, to get her daughter’s release; and Amos Tamam as the hapless Israeli Minister of Intelligence, who seemingly can’t do anything right.

Outstanding performances are delivered by Raida Adon, as the mother’s Palestinian friend; and Rotem Abuhab, as the minister’s wife. Jameel Khoury is impressive as a wheelchair-bound Hamas commander, but ‘Fauda’ costar Shadi Mar’i is completely wasted in his role as a terrorist-in-training.

Many things are hard to believe in the series. All that the best Israeli intelligence officers can do on the captives’ behalf is stand motionless as their drones follow them from above. The Minister of Intelligence seems to be the only government official concerned with the incident. There is no explanation for relentless, seemingly unprovoked Israeli bombing of Gaza. And, the Egyptians don’t seem to be involved in what is happening in their territory.

Still, there is one reason to watch ‘The Girl from Oslo’, and that is the stunning desert landscapes where much of the action takes place. Although portrayed as Sinai, the series was actually filmed in the Negev and the Arava, and in Timna in particular. Israel’s southern regions have never before been shown so beautifully on the screen.

Netflix spends billions of dollars on content. One can only hope that the next Israeli thriller to stream on the service will be a bit more believable than ‘The Girl from Oslo’.