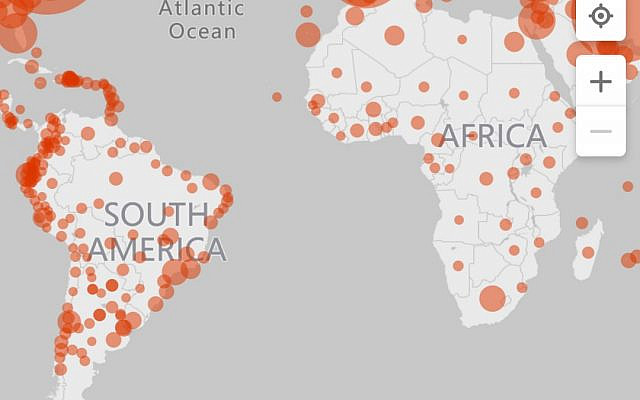 Free to share graphics from the WHO. Size of the red dot reflects the number of the countrys population. (Courtesy of WHO, 2020, freee to share).

During the last couple of days I have seen not only comparisons between how each country handles it domestic situation. I have also seen comparisons and finger pointing which is NOT helping.

Rest assured, in every country there is an infection expert acting as a close advicer to the countrys leadership. They have all been schooled in the same way. Diseases are universal – how we treat them differs from country to country. It has to do because we are different – The Nordics has for a long time critisized some Middle Eastern – and Southern European countries for their grave overuse of Antibiotics. This has resulted in resistant bacterias which roams those countries to and from.

Has the finger-pointing helped? Not at all – quite the opposite. And I see similar finger-pointing inbetween countries now. Let me tell you it does not help either. Every country has to take its measures – in accordance to local culture, the situation in the country and what kind of infrastructure is available.

Israel took draconian measures early, which are way too early to judge or deem responsible or irresponsible or whatever. The same goes for the UK and Sweden – they chose the path to keep kindergardens open, in order to keep the NHS and the Swedish counterpart staffed and ready.

A good thing about Israel is they prioritize life above all. I hope they can keep with it. I have a close friend at Hadassah – he was not been contactable, we all are preparing for his death. But I trust Hadassah. I have a Swedish friend who is sick, her advice is to stay at home unless it really goes to hell.

No one can tell if absolute quarantine was the right decision for Colombia or Germany. While most germans respected the government – our rebellious Berliners did not care at all and kept partying like it was 1999. In Colombia, which has no social security it will take a month before looting and robbering will start, at most. There are already 1,5 million venezolanos there – living cramped under whatever shelter they can find. And Venezuela itself has nothing to combat this.

So – by saying another countries should do this or that, you basically need to have deep down advanced knowledge about the economical situation, the social system, family hierarchy, religion, infrastructure, leadership… Yeah you get it. Don’t blame other countries.

Yet – no country has proven that they are completely Corona-free. China says the city of Wuhan is free of it. But the rest of China… No clue. And the sane goes for India – a mass-populated country with its cast-system, different populations and some other dubious diseases spread by the poison and destruction of its nature. I do not know how they will handle it. But rest assured they have to do it the Indian way. Just like Finland does it their way. Or Israel its way.

Its of course totally acceptable to critisize your own country or countries – most of us are dual citizenships anyway. But do not start bashing Italy, Spain or the US at this moment. Or Sweden. Or Israel. All these countries are doing it their way. Chinese officials from Wuhan now bashing Europe or the Americas for not doing it the Chinese way – well, we are not Chinese (most of us). We live completely different lifes. We live, mostly, in democracies – we take certain things for granted.

Of course – a pandemic is a pandemic and it does not discriminate. Taking advice and co-operate is a key to success. But trying to win populistic points by pointing at another country as “crazy, lazy, too late, too early, too hard, sleeping” – not acceptable. Especially not by us – the common human. We should keep taking our responsibility and tru to find acceptance for the situation. I was in lockdown in Spain for 12 days, before coming home. Went back to work for a few days – but have now about 21 days to take care of myself, rest and my family. Payments taken care by the state.

I wonder what I will do now. I have done my service. I have finished Netflix, I rewatched Chernobyl on HBO. I rewatched Fauda season 1, 2, and 3. And the bonus series no 4 (youtube it from israeli channel 12).

There is not much left to do. I read about soviets being quarantined for 2 months – there were state TV. We can still blog here, keep in touch, informing each other abd try ro keep each others haopy. Thank God for Zoom. Videocalls on Whatsapp and Facetime. We will pull through this, we are resiliant.

If a death-poor country in Africa could combat and win over Ebola – which probably enters the top #10 for most dangerous viruses. Then we can handle this.

Two of my friends has it, I most probably have it. But don’t worry about me. I am already isolated. And happy to live on the real remote countryside – I can actually take a walk on my 2000 sq m backyard. The spring is soon upon us.

We just have to accept to spend our vacation at home.