The Blogs
Jack Schwartz
Apply for a Blog
Advertisement
Please note that the posts on The Blogs are contributed by third parties. The opinions, facts and any media content in them are presented solely by the authors, and neither The Times of Israel nor its partners assume any responsibility for them. Please contact us in case of abuse. In case of abuse,
Report this post. 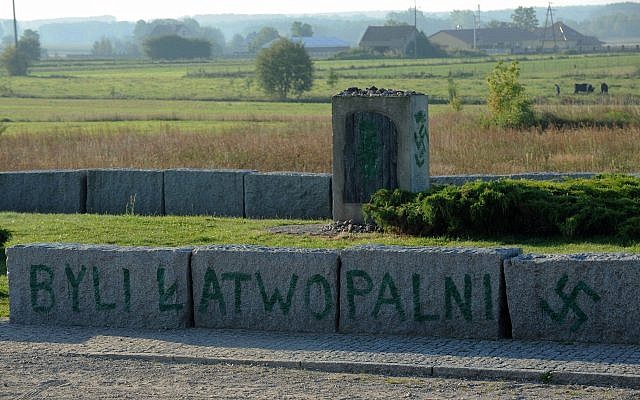 An inscription reading 'They were flammable' and a Nazi swastika are seen in Jedwabne, Poland, September 1, 2011, on the monument dedicated to Jews from the town of Jedwabne burned to death by their Polish neighbors in 1941. (AP/Michal Kosc/File)

By officially absolving the Polish nation and state of involvement in the Holocaust last week, Israel has now vindicated Poland’s long-standing campaign to deny its role in the Shoah. In so doing, it has exonerated Poland for its well-documented collaboration with the Nazis, embraced its false narrative of innocence and desecrated the memory of the three million Jews who were slaughtered on Polish soil. One would expect such behavior from such Holocaust deniers as David Irving or Robert Faurisson. But that this whitewash comes at the hands of an Israeli government is a painful betrayal of the murdered Jews of Poland.

In the concordat reached between Benjamin Netanyahu and Polish Prime Minister Mateusz Morawiecki, what the Poles “gave up” was legislation that prosecuted anyone claiming that Poland or its people were responsible for crimes committed under the Nazis. The law has now been “rescinded,” so that those making such assertions would still be liable to civil suits which would be actively pursued with the full force of the state’s backing.

That there is still a “debate” about the Polish role in abetting the Nazi extermination of its Jews is itself a brazen assault on truth. The preponderance of historical studies, books and documentation has revealed Polish collusion with the Nazi murderers on a widespread scale. Israel’s Holocaust memorial center, Yad Vashem, alone has meticulously demonstrated this collaboration and has assailed the joint Israeli-Polish statement for “grave errors and deceptions.”

Netanyahu’s accommodation allows Poland to assert that it has been exonerated by Israel itself, thereby dismissing its Jewish critics as fabricators using the Holocaust to extort money from the Poles. But the worst damage is the danger this expedient poses to the voices of conscience within Poland, beleaguered by a populace that has closed ranks against anyone daring to question the official story of Polish involvement. Courageous Polish dissenters, such as the historians Jan Gross and Jan Grabowski and journalists like Anna Bikont, have been vilified, maligned, and threatened for their valiant work in unearthing the past.

Grabowski, in “Hunt for the Jews,” his devastating study of Polish Jewry under German occupation, has made the case that at least 200,000 Jews who escaped from the ghettos were murdered or denounced by Poles. The camps may have been run by the Germans but it was the Poles who held the Jews on the scaffold while the Nazis tightened the noose. And the Poles, as a community, were complicit in the murder of their fellow Jewish citizens under Nazi rule. That there were heroes who acted decently is what saved the honor of Poland, but they were a minority, who often had to hide their deeds from the malice of their resentful neighbors.

The experience of the journalist Anna Bikont, chronicled in her aptly titled book “The Crimes of Silence,” is reflective of the virtually universal animus and intimidation a Polish writer must face in uncovering the truth of the Poles’ involvement in the Shoah — and this was before Poland’s current laws were enacted. Bikont’s book is essentially a chronicle about the frenzy of denial that seized Poland in reaction to Jan Gross’s 2001 “Neighbors,” recounting the massacre of the Jews of Jadwebne on July 10 1941, shortly after the German invasion. In the words of the prosecutor Radoslaw Ignatiew, who conducted a meticulous investigation of the massacre on behalf of the Bialystock Institute of National Remembrance: “The perpetrators of the crime, strictly speaking, were the Polish inhabitants of Jedwabne and its surroundings.” The Germans gave the green light to the local population but it was the Poles who committed the slaughter.

The massacre was carefully planned with men assigned to round up the Jews, force them into a barn where between 350 and 500 were burned to death, and block the town exits so no one could escape. Most of those who managed to flee were hunted down and slaughtered by the Poles. The Germans had only a few men on the scene.. The number of victims is probably greater, since Jedwabne was flooded with Jewish refugees who had fled massacres in the nearby towns of Radzilow and Wasosz. Jedwabne was the culmination of a much wider regional genocide in the Lomza district encouraged by the Nazis and executed by the Poles in which Polish “partisans” actively participated.

Polish President Andrzej Duda’s disclaimer, acknowledging that “there were cases of huge wickedness,” suggests that there were a few bad apples, when it was the rescuers who were the exception. No one was forced to participate in the massacre. In the frenzy of pillage that followed the slaughter the only recriminations were among those who fought over the booty justifying their right to the lion’s share on the grounds that, having killed more, they deserved more.

The massacres in the Lomza district — they were not pogroms — did not occur spontaneously. They were nurtured by a pre-war anti-Semitic nationalism incited by a Jew-baiting Catholic Church that preached a virulent anti-Semitism from the pulpit, in its press and in the political movements it fostered. It encouraged anti-Jewish actions and an expulsion of the Jewish presence well before the Germans arrived.

For many Poles, the unforgivable crime of the Hitler-Stalin pact of 1939 was not the German invasion in the West, but the Soviet occupation of the eastern third of the country. They readily embraced the Hitlerite calumny of Judeo-Bolshevism and identified the Jews as collaborators with the occupying Soviets.

What the historical record shows is that it was the Poles who collaborated with the NKVD in far greater numbers than the Jews. But this was lost in the reprisals that followed the Soviet retreat after the Nazi onslaught of June 22, 1941. Motivated by the opportunity for both vengeance and pillage, the Poles indulged in a frenzied massacre of their Jewish neighbors. Bikont shows that “patriotic” Poles had no conflict with participating in a massive slaughter of the region’s Jews under Nazi aegis, and subsequently engaging in partisan activities against the Germans and the Soviets. It was all of a piece with cleansing the homeland.

The Jews of the Lomza District were murdered many times over: First by their Polish killers, then by postwar Polish tribunals that punished a few perpetrators and turned a blind eye to the rest. Then by the vilification of Jan Gross’s book. Then by a Polish regime that sought to criminalize even a mention of the truth. And now, most shamefully, by an Israeli government that has effectively collaborated with Poland’s mendacious narrative. It is ironic that while the worst perpetrators served a few years for their atrocities to return home to hero’s welcomes, under the aegis of the exceedingly misnamed Law and Justice Party, anyone who exposes their crimes can be hauled into court.

The Polish-Israeli joint statement condemns a generalized “cruelty,” without designating the nature, extent and specificity of that of “cruelty” nor citing the nationality of the perpetrators. It plays into Poland’s self-serving narrative of its role in the Shoah. There are two central aspects of Holocaust denial: 1) that it happened and 2) that large segments of a national community enabled it. The Polish variant falls under the second category.

A Jewish government has supported it. Which makes it an enabler of Holocast denial. For years Jews have condemned governments that condoned immoral behavior during the Holocaust. But now, Israel, for its own expedient reasons has done the same. In so doing, it has surrendered any pretense to the moral high ground.

About the Author
Jack Schwartz is a former book editor of Newsday.
Comments