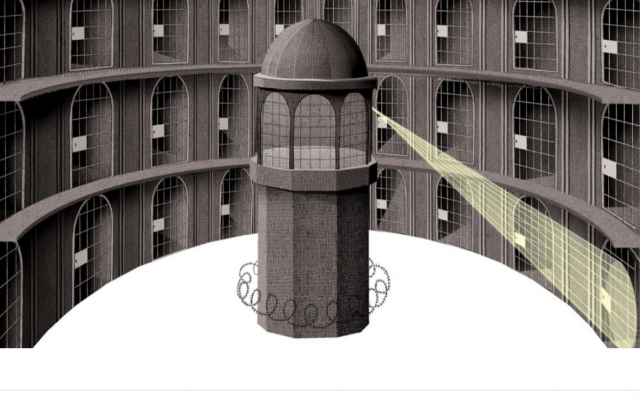 The panopticon. (Photo is a public image.)

Imagine if no one was around to record Minneapolis Police officer Derek Chauvin murdering George Floyd. Chauvin may not be in jail. Floyd would have been possibly scapegoated. Citizen recordings of that murder was an inversion of the panopticon. Allow me to explain the panopticon.

18th century Philosopher Jeremy Bentham used the Greek word panoptes, all seeing, to describe his design for a prison, the panopticon. Bentham’s innovation was a penitentiary with a rotunda at its center, from which they stationed a single guard who prisoners could not see and who could watch any prisoner at any given moment, but never all at once. Prisoners never knew when the guard was watching them. The panopticon thus directs prisoners to act as if they’re always being observed, in turn controlling the prison population.

Foucault was perhaps more right than he realized, especially when taking 21st century almost everywhere police camcorders into account and our now algorithm-driven consumerism, which doubles down on his explanations that powers beyond our control socially discipline and punish us. However, Foucault didn’t anticipate that we would all be walking around with smartphones with video cameras, nor did he expect computer hackers like anonymous. These tools enable citizens to sometimes invert the panopticon, and perhaps if done enough, diminish police illegality.

Twice at professional meetings, I opined we have the capability to today see authority watching us. The first occasion was in 2007 at a conference on genocide at the University of Oregon when Professor Oren Stier explained how we can now look where genocide is happening in Darfur through satellite pictures. I blurted out: “that’s an inversion of the panopticon.”

The second time was at a recent seminar on the philosopher Emanuel Levinas and Democracy. Levinas locates the origin of ethics in our face to face relationships. Politics are about the other’s neighbor and the neighbor’s neighbor, all of whom are beyond me. I asked what  Levinas might say about witnessing the other’s face dying on a video or seeing the face of a police officer while murdering someone, e.g., George Floyd? It’s an odd moment since Floyd wasn’t facing me while I was facing him through a video. I could see my neighbor’s neighbor’s neighbor being murdered by a police officer because citizens inverted the panopticon by recording the murdering officer with their smartphones.

I then asked if anyone knew who had produced the policies for their local law enforcement department. There was no one who knew. No one had done the work to discover how local law enforcement power watched, disciplined and punished itself. No one in the 18-person seminar knew that many police departments buy their policies from private companies run by former police officers with law degrees, making meaningless the statements by departments that an officer’s conduct did not violate their policy.

Do yourself and your community two favors. Always record police interactions with civilians while keeping a safe distance from law enforcement operations. Do not impede police work while recording. Please find out who wrote the policies for your local law enforcement department and protest local authorities if it’s not authored or at minimum informed and produced by an elected body of local citizens. We can sometimes invert the panopticon. To deny ourselves this citizen power is to live in Bentham’s panopticon

About the Author
Dr. Stephen Stern is the.co-author with Dr. Steve Gimbel of Reclaiming the WIcked Son: Finding Judaism in Secular Jewish Philosophers, and the author of The Unbinding of Isaac: A Phenomenological Midrash of Genesis 22, Associate Professor of Jewish Studies & Interdisciplinary Studies, and Chair of Jewish Studies at Gettysburg College