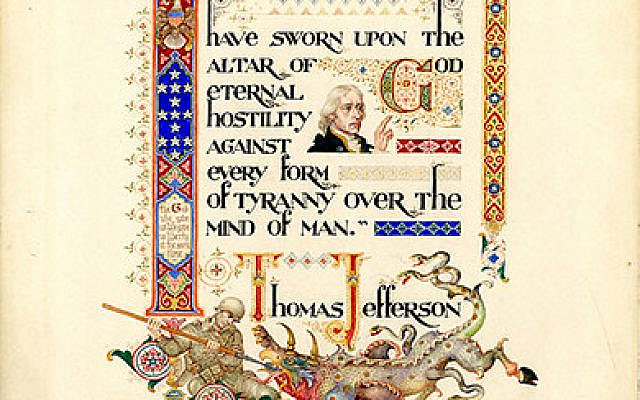 It would be hard to imagine a better moment than this one for a major exhibition of art infused with social and political protest. But when the exhibition is at UC Berkeley’s Magnes Collection of Jewish Art and Life, its power to educate, provoke and inspire is supercharged.

“In Real Times – Arthur Szyk: Art & Human Rights” is the culmination of three years of multi-dimensional exploration of the extraordinary Taube Family Arthur Szyk Collection acquired by the Magnes in 2017. Arthur Szyk’s life and work spanned the major upheavals, wars and calamities of the first half of the 20th century. However, it is impossible to view his work now and not recognize its relevance to today’s world.

Francesco Spagnolo, who co-curated the exhibition with Shir Gal Kochavi, describes why the unique visual style in the 54 original works on display is so captivating. “Szyk’s modular aesthetics are deeply connected with the political scope of his art. Medieval and Renaissance techniques, multilingual literary quotations, witty visual allegories, as well as modernist depictions of technology regularly recur….”

Szyk went viral.  He was the Instagram of his day. 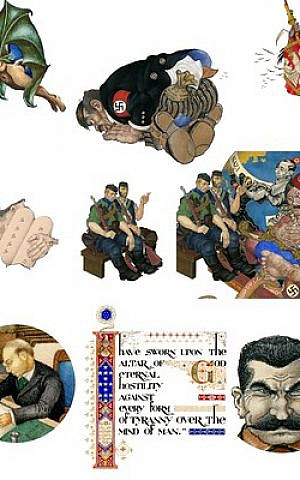 Visitors can make and upload clips from Szyk’s complex work to examine it in greater detail. Image courtesy of the Magnes Collection of Jewish Art and Life.

Huge digital screens and iPads enable Magnes visitors to enlarge the extraordinary detail in each piece, making it possible to play with and think about the art in new ways. At a recent private event, a capacity audience was treated to a lecture by renowned scholar Barbara Kirshenblatt-Gimblett, whose designation as a winner of this year’s prestigious Dan David Prize had just been announced. Having been a graduate student at UC Berkeley in the turbulent 1960s, her insights into the significance of the artist and the potential his work offers for the 21st century were especially keen.

Describing Szyk’s style as a mix of “Mad Magazine” and “Where’s Waldo,” Kirshenblatt-Gimblett told a spellbound crowd that during World War II, “Syzk went viral. He was the Instagram of his day.” Using a cartoon caricature style, he subverted images of power and turned them into images of degradation.

The Magnes was the first Jewish museum to be founded in the United States after World War II. Today it is well on its way to fulfilling the potential created when it became part of a major public research university 10 years ago. At the entry of “In Real Times,” is a striking photo of Szyk taken by Roman Vishniac. The interaction of these two giants of 20th century social and political art hints at more to come. The Taube Family Arthur Szyk collection was joined at the Magnes in 2018 by another extraordinary gift of the Roman Vishniac Archive. These constitute two of the four largest gifts of art ever received by UC Berkeley (the others are the Hans Hofmann collection and the Mark Twain papers).

While many associate Szyk with his famous Haggadah, the spirit of his work is perfect for Purim. It invites us to look very closely at a multi-layered story of history, humanity, power, human rights and politics. It is the whole megillah for our era and another reason why “In Real Times” is a message we cannot ignore.

TO LEARN MORE.  A free public program about the exhibition is being held on March 12 at the Magnes. All the images included in it can also be viewed on Flickr. The Magnes is creating thousands of digital files from the 450 original Szyk works in the collection, with the goal of making them accessible internationally. The current exhibition continues through May 29, 2020.