Last Friday, a friend of mine was chosen to answer a political poll.  It was from Project Sampling Panel, and it asked this:

If the elections were held today, and all of the parties were those listed below, which party would you vote for?

As you can see, the Zehut Party was not one of those “listed below”.  My friend entered Zehut into the Other choice, but of course, most people won’t bother to do that unless they’re very committed to the party.  The poll was created in such a way as to ensure that Zehut would receive fewer votes than really reflect its popularity.

This is a particular problem, because Channel 13 used this panel as the source for their most recent polling data.

When the bias in the poll was pointed out to PSP, this was their response: 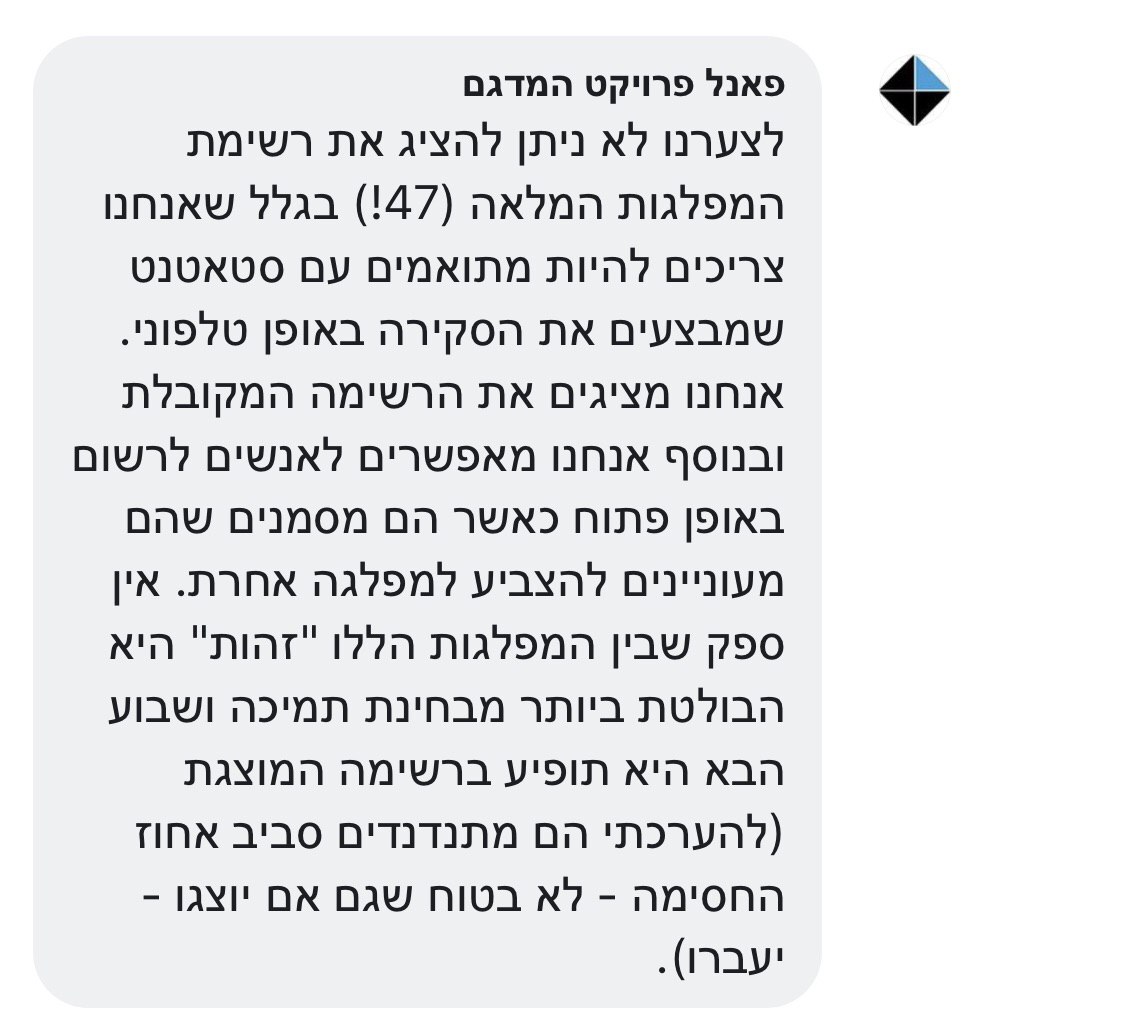 “Unfortunately, we can not display the full list of parties (47!) because we need to be in line with the status of the telephone survey. We present the accepted list and we also allow people an open opportunity to write in another party that they want to vote for if it doesn’t appear. There is no doubt that among these parties, “Zehut” is the most prominent in terms of support, and next week it will appear on the list presented (in my estimation, if you hover around the threshold, it is not certain you will pass even if presented).”

This, of course, is in addition to the fact that pollsters have, up until now, refused to present the raw data of the polls, including the 25-35% undecided. Instead, they have apportioned the undecided to the various parties according to their own “estimations”.  A suit brought by the Green Leaf Party resulted last week in a ruling that they may no longer do this.  That they have to present the unprocessed data to the Election Commission.  Despite this, most of the public is still unaware that the data it sees in the news isn’t the real data, but rather “processed” data.

Who is being polled?

So when poll results are presented, who is being polled?  Who are the subjects of the poll?  I know I’ve never been contacted by any polling company for a political poll, and most of the friends I’ve asked have never been either.  Clearly, they don’t poll everyone.  That would be incredibly time consuming and expensive.

So how many people do they ask?  Well, a few weeks ago, Israel’s Meet the Press show introduced their poll by saying that it was based on 503 people.  That’s right: 503.  Out of an estimated 4 million voters.

There is a branch of statistics called “sampling”.  It involves selecting a small group out of a large population and testing the small group instead of having to test the whole population.  This is obviously more efficient than having to poll everyone.  If there are approximately 4 million voters in Israel, and polling companies only want to poll between 300 and 800 people, they have to find a way to sample the 4 million so that the roughly 500 people they select are representative of the whole 4 million.  The way this is done in Israel is through a particular type of sampling called stratified sampling.

In statistical surveys, when subpopulations within an overall population vary, it could be advantageous to sample each subpopulation (stratum) independently.

These subpopulations are commonly called “sectors” in Israel.  In Hebrew: migzarim (מגזרים).  And Israel is, and has been since its founding, an incredibly sectoral nation, particularly in the political arena.  When it comes to Israeli politics, stratified sampling is the best way to do things.

Or rather, it was.

A new player – a new game

What happens when a party comes along that doesn’t want to play the sectoral game?  A party that doesn’t just say it wants to reach out to all parts of the political spectrum, but actually does so?  That’s what the Zehut Party is all about.  At the founders conference back in 2016, Party Chairman Moshe Feiglin stood before the more than 400 party founders and proclaimed: “The era of right and left is over.  The era of religious and secular is over.”  And over the past 3 years, this has become a reality.  The recent addition of former Shas MK Rabbi Haim Amsallem and wild man standup comic Gadi Wilcherski to the party’s ranks merely gave public faces to the actual makeup of the party and its supporters.

The Zehut Party recently commissioned a study to determine where its potential support is coming from.  Like any political party, particularly one with no public funding, Zehut wants to get the most bang for its buck, so it needs to know what populations to focus on.

This study was deep.  It wasn’t just 5 or 10 questions.  It was seventy questions.  And it didn’t use a sample of a few hundred people – thousands were included.  And the results were eye-opening, even to the party leadership.  Because if you take a chart that shows how the Israeli population is divided by sector, and if you then take a chart that shows how potential Zehut voters are divided by sector, the two charts are close to identical.  Zehut has support, according to this study, from people in every political sector in Israel – radical right, moderate right, center, moderate left, radical left.  Haredi, religious Zionist, traditional, secular, anti-religious.  Even Arabs.  And that support is proportional to those sectors in the general populace.

Zehut is not sectoral.  And as a result, it is virtually invisible to polls based on stratified sampling.

What are pollsters supposed to do with the Zehut Party?  If they understand the non-sectoral nature of the party, they know they can’t use stratified sampling to accurately gauge the party’s strength.  But at the same time, if Zehut is a flash-in-the-pan party that doesn’t have much support in the first place, it’s fairly pointless to invest the kind of time and money that would be necessary to change the sampling model they’ve been using for decades.  It’s a Catch-22.  The only way to know whether Zehut has enough support to justify changing the model is to change the model and see.  So a lot of pollsters have taken the easy way out.  They have simply omitted Zehut from the options presented to their respondents.  And the more they present Zehut as not crossing the electoral threshold, the more people are afraid to vote for them, lest their votes be wasted, making the low polling of the party into a self-fulfilling prophecy.  Which is good for the polling companies, because it means they don’t need to change their sampling model.

And the public has a need to know.  It’s 2019, and we have lost the habit of not knowing what’s going to happen in advance.  We live in a world of movie and TV spoilers.  Of instant access to information.

It is better to be roughly right than precisely wrong.

John Dayton said this many years ago, and it goes against the grain of the average media consumer.  It goes even more against the grain of the average media supplier.  “Roughly right” just isn’t good enough.  We don’t want to hear, “We don’t actually know what’s happening, but here’s a rough estimate, as far as we can tell”, even if that’s the truth.  We’d rather have a solid answer, even if the answer isn’t all that accurate.  We can always make corrections later on.

And as a result, the polls presented by the media are precisely wrong when they come to the Zehut Party.  They provide a comforting precision, but they miss the reality.

What is the reality?  The reality is that weeks after the release of the second edition of the Zehut Platform in book form: To Be a Free Jew – The State of Israel: Operating Manual, it remains at the top of the non-fiction bestseller list.  Store after store is selling out, to the point that the party has had to go back to the publisher, again, to order another batch of books printed.  Parties such as The New Right have been running to catch up and have released their own platform, the vagueness of which simply emphasizes the difference between a party that wants everyone to know what it intends to do to fix the problems that beset us in Israel and a party that just wants to keep its seats.

The reality is that all around the country, high schools are having mock elections, as they do before every election, and the Zehut Party is consistently receiving between 6% and 23% of the votes.  Never dropping below any party other than Blue & White and the Likud, and not always below both of those.

The reality is that in the “traveling ballot box” seen on the news, Zehut is doing almost as well as it is in high schools.  And every online poll has shown incredible support for Zehut.  Not only above the threshold, but well above the double-digit mark.

The common denominator of all of these polls?  They are “unscientific”.  They rely on a random sampling that does not reflect the populace as a whole.  But they also aren’t limited by the stratified sampling and low sample sizes of the polls presented by the media.

Only random sampling around the country, together with sample sizes in the thousands, will show the true size of the support for the Zehut Party before election day.  It’s unlikely that the polling companies will do this, which means that it’s likely that Zehut will continue to show subpar polling numbers up to election day.  And the party will lose votes because of it.  But if it loses one in every three voters due to threshold-phobia, the results of the study the party commissioned still predict up to 12 mandates.  Which isn’t bad at all for a first outing of a party that’s so very different from every other party in the history of the State of Israel.