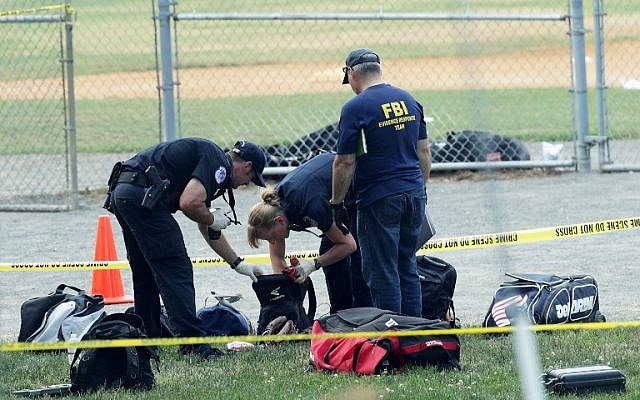 Investigators search the bags that have been left behind at the Eugene Simpson Stadium Park where a shooting took place on June 14, 2017 in Alexandria, Virginia. (Alex Wong/Getty Images/AFP)

To better understand what is happening, I suggest we look back at the famous Talmudic duel waged by Rabbi Eliezer against his colleagues (Bava Metzia 59b). As we are to understand, Rabbi Eliezer took the correct position in a deceptively technical debate about ovens. The only problem was that he could not convince his colleagues that he was right. And since the rabbis followed the Torah’s principle of following the majority, he knew that he would be overruled. He also know that there was much more at stake than the oven. His approach to the issue represented a whole weltanschauung, gradually being undermined by the numbers consistently going against him. It was not just a question of his personal beliefs. At stake was no less than the future of the entire Torah enterprise. But what to do?

Rabbi Eliezer can be compared to a dissenting surgeon with a patient on the table. The patient’s life is on the line and the majority has decided on a procedure that the dissenter knows is lethal. What to do? It seems that the answer in both cases is that if you are not able to convince your colleagues, you may not get in their way – regardless of the price. Otherwise, chaos will rule. Accordingly, Rabbi Eliezer’s colleagues stood firm in holding the chaos at bay. Majority rule is rooted in the wisdom that – all other things being equal – the majority is more likely to be right than the minority. It is also the most equitable way of making zero-sum decisions where compromise is not possible.

Rabbi Eliezer, however, was unable to restrain himself. He called on the walls of the study hall to cave in on its assembly, something which they almost did. Nor was that the end of it. After his colleagues determined his antics unacceptable and dismissed him from the council, he called to Heaven to invoke further violent retribution against them. The most chilling moment is saved for much later: When his former student, Rabbi Akiva, asks whether he might be spared the fate of the others (who were martyred by the Romans), the answer is that “yours will be the worst of all” (Sanhedrin 68a).

Rabbi Eliezer was both a genius and a pious man. What could lead him to such a response? The Talmud is actually quite clear. It tells us that he gave his interlocutors “all the answers in the world” to prove his point, but they did not accept any of them. It is not that they were not listening. They simply could not see that he was correct. But could anything be more frustrating? Not being understood is difficult under any circumstances. Add that to the knowledge that you are right about something very important that will not go your way and you have a very precarious situation indeed. The Talmud does not censure the rabbis for their treatment of Rabbi Eliezer. But neither does it censure Rabbi Eliezer. In fact, it explains that Rabbi Eliezer suffered so greatly at their hands that God was likely to answer his prayers against them.

Rage is not a pathology. It is a normal – I would even say, healthy – reaction to one’s inability to accomplish things one is convinced are both important and right. People respond with rage when they feel powerless to prevent the patient from being killed! Of course, there is a difference between feeling rage – and even wanting people dead – and actually acting upon it. While it may appear that Rabbi Eliezer did act upon it, what he actually did was to put his will in the hands of God. Had he done otherwise, he would have been responsible for one of Judaism’s three cardinal sins. When it comes to murder, there is no such thing as extenuating circumstances.

But the more important point is that if we want to minimize rage, we need to try harder to listen to the other side. It is quite rare that we would reject “all of the answers in the world,” if we were really listening. As far as the Talmud is concerned, this is a highly unusual occurrence and so, we only read about one such story. Today it seems commonplace. What the rabbis saw as commonplace was just the opposite, reminding me of popular historian Barbara Tuchman’s description of Lord Balfour as someone who “could see the arguments on both sides of a matter… the penalty of the thoughtful man.” We are certainly in need of such thoughtful men and women.

It is true that for each Rabbi Eliezer, there will be at least one Osama bin Laden. Sometimes even after trying to entertain the other’s perspective, it will continue to seem reprehensible. In those cases, we will need to enforce that which established norms allow us to enforce, in spite of our knowledge of the probable fallout. But Western society must decide whether the growing cultural and political divisions within its midst are really of that type. If they are not, we will all need to become better listeners.