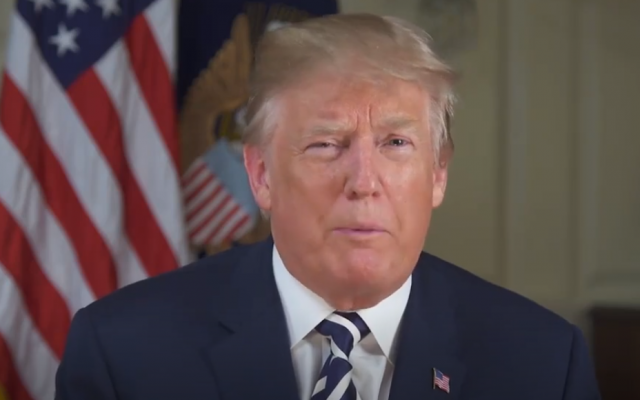 US President Donald Trump in a video message shown at the opening of the US embassy in Jerusalem on May 14, 2018. (Screen capture: JW Player)

What’s a pulpit rabbi to do? Should rabbis express political views from the pulpit?

I thought that it was important to state from the pulpit that we should express our gratitude to President Trump for standing with Israel and backing out of the Iran nuclear deal. Personally, I was very happy that the United States backed out of the deal. I believe that the deal is severely flawed and pulling out of the deal was the best course of action. I also felt that this action was supported by those who most truly care about the welfare of the State of Israel (although, I will admit, some may disagree with this assessment). First, the Israeli government, who represents the State of Israel, strongly advocated for the United States to pull out of the deal. Additionally, AIPAC, an organization that is a true friend of Israel, fought against the Iran nuclear deal and they feel that the agreement is flawed.

However, I might be wrong. The Israeli government might be wrong. AIPAC might be wrong. Leaving the deal in place might have been the best option to deal with the Iranian nuclear threat. And if that possibility exists, should I thank President Trump publicly, from the pulpit, for possibly bringing the world one step closer to a nuclear deal? Won’t that make some people in my shul, those with political opinions that differ from my own, feel uncomfortable in a synagogue?

Ultimately, I felt that it was important to express gratitude publicly to President Trump for standing with Israel in the face of tremendous opposition. The decision to pull out of the Iran nuclear deal could prove to be wrong, but President Trump stood with Israel in an issue that is critical to its very existence. Whether we agree or disagree with President Trump on a whole host of other issues, the point of saying thank you is simply that — say thank you when someone does something good, even if you don’t like the other things that he does.  That is an important rabbinic message to share with the community — thank someone for standing with Israel on a crucial issue in the face of opposition.

But I was still concerned about what I would say, how I would say it, and whether I could say something with which both Republicans and Democrats could feel comfortable. So I sent my proposed language to a congregant whose political opinions are not typically aligned with President Trump. This person made some suggestions, and we came up with the following language that I said from the pulpit this past Shabbat following the prayer for the United States of America, prior to the prayer for the State of Israel:

“I think it’s important that we express hakarat hatov to President Trump for standing with Israel and supporting the Israeli government’s position regarding participation in the deal. None of us are prophets, some of us are ecstatic by what transpired this week, some of us are cautiously optimistic and some of us are worried that pulling out of the nuclear deal may prove to be disastrous to the region. I also realize that it’s a slippery slope regarding when to thank and not thank a politician publicly from the pulpit. That said, the fact that the Israeli government believes that the current nuclear deal poses a dangerous existential threat to Israel and President Trump supported the Israeli government in its assessment on such a critical issue to Israel’s very existence, to me, is a reason to express gratitude to the president. We express our hakarat hatov to the administration, along with our hope that these actions do lead to peace.”

I thought that the language that we came up with was even and balanced insofar as we were simply expressing gratitude for President Trump standing with Israel. Yet, as I was shaking congregants’ hands while the Torah was being led back to the aron hakodesh (the holy ark), one congregant said to me, “You’re killing me!” Apparently, my “even and balanced” expression of gratitude made him feel uncomfortable in this safe space called the shul.

What did I learn from this episode? Will I avoid publicly expressing gratitude to politicians from the pulpit? Probably not, especially in these unique situations when they stand with the democratically-elected government of Israel in the face of strong opposition on significant issues. But it’s not so simple.