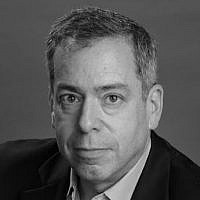 The Blogs
Mark Weitzman
Apply for a Blog
Advertisement
Please note that the posts on The Blogs are contributed by third parties. The opinions, facts and any media content in them are presented solely by the authors, and neither The Times of Israel nor its partners assume any responsibility for them. Please contact us in case of abuse. In case of abuse,
Report this post.

Pope Francis’ visit to the US has created a tidal storm of “Popemania.” In Washington he is the first Pope ever invited to address a joint session of congress; and in New York, a city which handles, without blinking, the numerous heads of state who come each fall for the UN General Assembly session, some schools cancelled classes in anticipation of the massive congestion and traffic snarls that are expected.

Pope Francis has earned this outpouring of admiration and affection by breaking with precedent and tradition. He has restored the human touch to an office that was seen as far removed from the common people, and in doing so has touched a chord with groups that were considered far removed from the church’s influence, such as secularists and young people. His informal and humble style, far removed from the pomp and glitter previously associated with the church hierarchy, his visible concern for the poor and the environment and his commitment to interfaith reconciliation have all resonated in a Western world that has been sorely lacking credible spiritual leadership in its mainstream religions.

Still, with all these virtues, one cautious thought keeps intruding when it comes to the relationship between the pope and the Jewish people. And, in some ways, it is a paradoxical one. Some of the very traits that make Pope Francis so admirable and beloved may actually turn out to be open to manipulation.

For example, during the pope’s 2014 visit to Israel, he memorably stopped and was photographed praying at a section of the separation wall that compared Gaza to the Warsaw Ghetto. By all accounts this was an unscripted, spontaneous papal gesture of solidarity with those who portrayed themselves as poor and oppressed. The result however was a firestorm of criticism that led the pope, at the urging of Prime Minister Netanyahu, to offer the same gesture to a memorial to Israeli victims of terrorism. But the question lingers; why did Pope Francis allow himself to be put into such a politically precarious position?

Another example has occurred far from the glare of publicity that surrounded the pope’s visit to Israel. The controversy over the Holocaust denying Bishop Richard Williamson, and the antisemitic order to which he belonged before his expulsion (for disobedience), the Society of Saint Pius X, which has been placed in official schism by the Vatican, was one of the issues which helped define the papacy of Pope Francis’ predecessor, Pope Benedict.

Although Pope Benedict entered into negotiations aimed at healing the rift and restoring the SSPX to the good graces of the Church, he ultimately broke off the negotiations because of the SSPX’s refusal to accept the legitimacy of the doctrines established fifty years ago at the Second Vatican Council, including specifically “Nostra Aetate’, which radically reshaped the relationship between Catholics and Jews. As Pope Benedict himself put it in a 2009 letter “the problems now to be addressed… concern primarily the acceptance of the Second Vatican Council.”

This was surprising, given Pope Benedict’s reputation as a strict conservative who felt that the Church’s reforms had gone too far and had to be reversed. Yet under his leadership it was clear that the Vatican had drawn a line that they would not cross, not even to enable Benedict’s long held dream of healing the schism with the traditionalist groups to come true.

Thus it was somewhat disconcerting to find that over the last year, the “liberal” Pope Francis, has given the SSPX more concrete grounds for hope that they might be on the path back to canonical recognition with the Church than they had under the “arch-conservative” Pope Benedict. Earlier this year, the SSPX was granted Argentine state recognition as an official Catholic organization, completing a process that was begun while Pope Francis was still serving as Cardinal in Buenos Aires. This was followed by Pope Francis’ giving SSPX leader, Bishop Bernard Fellay, the authority to preside over a canonical trial that involved a SSPX priest. And finally, Bishop Athanasius Schneider of Kazakhstan, who was appointed as Pope Francis’ personal representative to the SSPX, was recently quoted as saying ‘there are no weighty reasons in order to deny the clergy and faithful of the SSPX the official canonical recognition’ and he added “…I think the issue of Vatican II should not be taken as the “conditio sine qua non”.

This paradox has even been noted by the radical traditionalist themselves. As one website put it “It seems a bit strange that of all popes it would be Pope Francis in whose papacy the most work for bringing the SSPX towards full canonical recognition would be accomplished.”

While reading Vatican tea leaves is notoriously difficult, one possible explanation for this surprising turn might be that Pope Francis’ innate goodness is at the same time his potential weakness. Unlike Pope Benedict, who was a rigid intellectual who believed in the authority of doctrine, and so would draw and respect lines, Pope Francis has been committed to reaching out and embracing those who appear to be downtrodden or outcast, even to the point of appearing to validate those committed to hatred and extremism.

If this is indeed the case, then the Torah, source from which both Judaism and Christianity draw, offers an important teaching. The Torah was well aware of the potential for misplaced sympathy. In Vayikra (Lev.) 19:15 we are commanded to “not render an unfair decision: do not favor the poor or show deference to the rich.” It is easy to understand the injunction against showing favoritism to the rich, but the idea of not favoring the poor is truly radical. The Midrash explains that it means that the judge should not let sympathy for what he or she visually observes to obscure the actual facts. To be true to their responsibility to both God and humanity, the true judge must not allow themselves to be manipulated and must base their judgment upon the actual facts of the case before them. Given the concerns noted above, perhaps if this verse was given more consideration by the Vatican future misunderstandings might be avoided.