A dead Pope, made a saint since his passing away, and his secret love life, is a hot item in the news. Oddly enough, it is headline news in Israel as well, featured in all major media outlets. The recent historic meeting between Pope Francis and Patriarch Kirill of the Russian Orthodox Church, a milestone in a thousand-year history, and a real piece of news, receives no mention. But John Paul’s love life is deemed important even for a website like the Times of Israel that is dedicated to Israel, the Jewish people and the region. Featuring an unrelated picture of the Pope at the Western Wall somehow makes the most recent piece of gossip of regional interest. 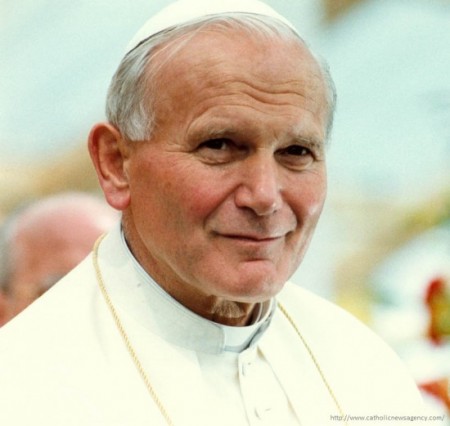 What is it about this story that fascinates Israelis who are so far removed from any real interest in Christian life? The immediate answer can be summed up under the 3 S’s — Star, Scandal and Sex. Our collective minds are so fixed on the lives of others — celebs, stars, and their personal lives, that anyone who has attained star status is treated in like manner. John Paul is arguably the greatest star in the field of religion in the 20th century and so his love life too is part of our collective habits of gossip and marveling at another’s life.

As today’s headlines in Yediot Acharonot suggest, there is a “but.” Family was central to his teaching, “but” now we know there is another side to him. So this recent story/scandal is a way of throwing mud at a revered figure, and thereby denigrating the person, the religion, perhaps religion as such. Even the greatest religious hero is just like us, subject to scandal. His stocks go down, and with them the value of his person and his message.

Behind the headlines is an implicit view of the life of religious leaders and holy individuals. It assumes they are somehow removed from common humanity, that they are in some ways lacking in heart and that their spiritual lives are divorced from the human processes, the heart processes, that characterize the rest of us humans. It would be sensational (another S-word) if we could prove he had sexual relations, but we can’t (we can only allude to the possibility), but let us at least highlight the scandal of the normality of his affections, that certainly have no place in the life of a religious leader, the world’s most prominent religious leader. By this reasoning, there exists a split between normal people who live the lives of householders, and religious personalities, who somehow lose their humanity when they enter the religious life. If, God forbid, their humanity resurfaces or becomes pubic, this is a source of scandal.

These assumptions need to be revisited. They represent a view of the religious life as dissociated from the core of the person, as if it consisted only of external commitments, rituals and roles. This view fails to consider the internal spiritual evolution of the person, and how it must be integrated into his or her psychological growth. It is a view that, in line with the gossipy approach to cheap — star — love, sees love mainly as desire, typically carnal desire, and as something that is distinct from the spiritual life. The carnal love of a woman belongs in the family (or out of it). The religious life has no room for deep human love.

In response to such a view of love and the religious life, I would like to share some of my own lessons as a rabbi and scholar of religions who has come to appreciate something profound about the inner lives of Christian monastics and celibates, through decades of close personal contact and friendship. What follows is based on intimate personal sharings with priests and monastics. It may not apply to all, but is certainly legitimate and respected enough to be part of the official biography of saints of the Catholic Church.

Let us perhaps begin here. There are great saints of the Catholic Church who are known to have had deep, intense, loving, and chaste, love relationships with members of the opposite sex. This is part of their official biography and, I would argue, also part of their greatness. Let me mention two famous cases. St. Francis of Assisi, one of Christianity’s greatest saints, had a lifelong bond with St. Clare, the founder of the women’s equivalent of Franciscan monks, the Poor Clares. Their love was channeled into a common spiritual quest and into the founding of the respective monastic orders. It is upheld as a model. 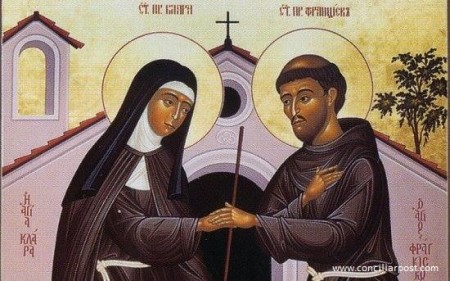 Less well known, but much more detailed in terms of the literary legacy and detail of intense feelings, is the love between St. Francis of Sales and St. Jeanne de Chantal. The depictions of love between these individuals are more intense than any of the recent quotes that the BBC and world media have found penned by Saint John Paul. In brief, the Catholic Church does not consider that this type of human activity is necessarily in violation or in opposition to the vocation of holiness it asks of its saints. My personal sharings with multiple monastics and religious devotees confirms that this approach can legitimately translate into the lives of dedicated celibates who offer their entire life for God. 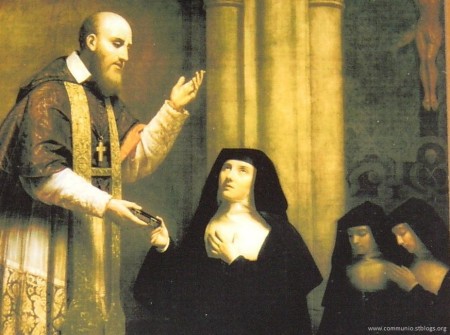 What for the media’s mind is a scandal was for this rabbi’s mind a great challenge and a great lesson. Growing up in a Judaism that highlighted distance between sexes, there was no role model or precedent for spiritual love. The ideal woman was the eshet chayil, the woman of valor (Prov. 31), who was the wonderful functional counterpart of her busy husband, understood as busy in the study of Torah. A blessed partnership in family and nation building was the reigning model, not intimate spiritual partnership. While surely such relationships existed, it is noteworthy that in all of Jewish literature we cannot identify a single instance of such a relationship. For all the praise they receive, women did in fact play some kind of de facto second class role, even if they received awards for supporting roles. Excluded from Torah study, they were never true spiritual partners.

Along with this view came the fear of women as temptresses, and the need to keep safe boundaries of protection, no doubt a legitimate educational concern. But the price paid for this concern was the potential for a split between the loves of one’s life. Very few resources exist (Rav Kook provides some important exceptions) for the integration of human love and divine love. No visible role model exists. There is no theory of personal spiritual growth that integrates the various love dimensions and teaches how growth in human love can be integrated in one’s spiritual life and how at times it is a condition and a prerequisite for it. Actually, there is little theory of personal spiritual growth, and indeed here is the root of the difference. Christian monastic tradition pays far greater attention to processes of interiority and personal growth, and this attention has made room for notable examples and teachings that integrate human love and divine love into one path.

Imagine then the great discovery of this rabbi when he learned that the affective life of his Christian friends and colleagues is often so much richer and more nuanced, and so much better integrated, than the mocking stereotypes that he had heard all too often. Certain Christian monastics became a source of envy, something to be appreciated, a teaching across religions.

The integration of human and divine love grows out situations and circumstances that can be surprising, disturbing and challenging. The brief quotes from John Paul’s letters suggest that much. The greatness of the man, and of the teaching we get a glimpse of, lies not in the confusion but in the quest, in his case clearly successful, to find the appropriate response, in keeping with his path and its commitments and to integrate this experience in a movement of internal spiritual growth. (We do not know the personal circumstances of the Pope’s intimate friend and how their relationship could fit into her family life. Inviting the Pope to her family suggests no one considered it a scandal, even if it was deeply engaging).

I had long heard of the late Pope’s supposedly secret love life. It was public knowledge and part of the profile of the person considered when he was declared a saint. It is only those who live a false dichotomy of human and spiritual love and who view the religious life from the outside who are scandalized. For those with a better knowledge of the tradition and the man this is not a “but,” something that detracts from the saint’s greatness. It is part and parcel of this greatness. This greatness stands as an invitation to members of other faiths and worldviews to consider the nature of true love. It is a testimony to how love can be lived in purity and chastity, with a divine regard. It is a testimony to our world needs, just as this rabbi needed it. In this sense, the publication of John Paul’s letters is a welcome invitation to higher love.