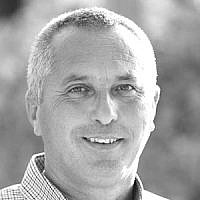 The Blogs
Grisha Yakubovich
Apply for a Blog
Advertisement
Please note that the posts on The Blogs are contributed by third parties. The opinions, facts and any media content in them are presented solely by the authors, and neither The Times of Israel nor its partners assume any responsibility for them. Please contact us in case of abuse. In case of abuse,
Report this post.

As Israel prepares to mark its 70th year of independence, Hamas, driven by its growing distress and its struggle with the Palestinian Authority (PA), is launching a new effort to create a narrative, which is designed to rob Israel of its ability to celebrate.

The background to Hamas’s latest escalation of the situation in Gaza lies in its internal Palestinian conflict with the PA and its President, Mahmoud Abbas.

Hamas and the PA are locked in a major struggle over who will be the legitimate representative of the Palestinian people after the departure of Abbas – who is likely approaching the end of his term as leader.

Hamas is trying to position itself so that it can make a bid to become the central Palestinian representative. Hamas’s main objective is that the next leader of the Palestinians will be someone from its own ranks.

Ultimately, these events represent a bigger transformation that Hamas is undergoing. When it was first established, Hamas was essentially a social welfare movement, based on the Muslim Brotherhood model.

Then, it turned into an armed terrorist organization in the early 1990s, and began attacks on Israeli civilians and security personnel. In 2007, Hamas entered its third stage, of becoming a ruler over the Gaza Strip, and seeking recognition as a legitimate political representative, both inside the Palestinian arena, and in the wider world. It continued its terrorist activities, parallel to its political aspirations.

Hamas is taking its time to progress through these stages. It is a thinking organization, and it does not act from the gut. The chief of Hamas’s Political Bureau, Yihye Sinwar and senior leader Ismail Haniyeh strike militant poses in public appearances, but also know how to act pragmatically when they feels it necessary to achieve the organization’s goals.

And now, Hamas is preparing to make its bid to become the main, legitimate representative of the Palestinians. Hamas is capable of responding to events as they occur flexibly, so long as it ends up moving towards its planned strategic goals. Hamas’s ability to plan strategically is evident in the way it conducted three armed conflicts against Israel, and then used them to support its narrative that it was able to stand up to the Middle East’s most powerful military. Victory is, after all, in the eye of the beholder.

The recent clashes on the Gaza border, organized by Hamas as part of the ‘March of the Return’ initiative, are merely a component in Hamas’s bigger effort to become the main Palestinian ruling entity. The incidents on the Gaza border should not be confused with the ‘main event.’

Hamas is using the march, and the ‘popular resistance’ model, as well as the violence these generate, to try and mobilize the worldwide 7.5-million strong Palestinian nation, stretched out across Gaza, the West Bank, Jordan, Lebanon, Syria, and worldwide.

The PA President, Mahmoud Abbas, who recently marked his 83rd birthday, is well aware of Hamas’s vision, and is determined to do everything in his power to stop it. Hamas has left a major stain on Abbas’s legacy, a fact that disturbs him greatly as he looks back over his years in power. Under his watch, the Palestinians splintered into two rival entities, following Hamas’s armed coup in Gaza in June 2007.

Yet Hamas has found that ruling its own enclave is no picnic. Its regional isolation and economic distress is growing more acute by the day. And the situation could get significantly worse if Abbas ramps up PA sanctions on Gaza, which he is likely to do.

Ramallah has now made it clear that in order for it to agree to a reconciliation arrangement with Gaza’s rulers, Hamas will have to accept an all or nothing approach. Either the PA will be allowed back into Gaza without preconditions, or any idea of reconciliation will remain fantasy. As the PA’s economic threat to Gaza worsens, Hamas knows that if Gaza collapses economically, it will open fire on Israel and initiate a new war.

An economic-infrastructure collapse will place Hamas in the same strategic distress that it experienced in 2014, when it launched an armed conflict with Israel.

A WAY OUT FOR HAMAS
In light of this situation, Hamas has initiated a new strategy to help it break out of its distress. It is not interested in entering into an armed conflict with Israel for the time being, and it seeks to remain in touch with Egypt, while also receiving legitimacy from the Palestinian street – something Abbas has been struggling to obtain. So Hamas thought outside of the box, and landed on a new idea: The ‘March of the Return.’

Dressed up as a popular struggle, this march calls for recognition of the so-called Palestinian right of return – something no Arab actor can openly call illegitimate, including Hamas’s bitter rival, Abbas. Hamas has forced the entire Palestinian media world, and Abbas himself, to express support for the march.

Meanwhile, Hamas’s message to Israel is that it cannot celebrate its 70th year of independence in peace. Hamas is challenging Israel’s legitimacy, by reminding everyone that the Palestinian refugees have yet to return, and by reminding Israel that it is still at war. This matches Hamas’s genuine current ideology, which calls for Israel’s destruction.

Today, Hamas is in charge of Gaza, which is in many ways a state. But Hamas does not want a state, because this interferes with its goal of trying to have the ‘full cake,’ meaning the power to represent all Palestinians, including those in the West Bank.

So it has turned to the ‘popular struggle,’ as a creative way to try and get itself out of the corner it is in. The events on the Gaza border have a chance of igniting unrest in the West Bank, which would serve Hamas’s interests perfectly, by spreading its influence, and undermining the power of the PA. This way, Hamas can harm both Israel and the PA in one shot.

Hamas’s cynical interest in damaging Israel in the court of international opinion means that it is interested in a high Palestinian casualty count during clashes along the Gaza – Israel border. Ideally, from Hamas’s perspective, the more women, children, and elderly killed on the Gazan side, the better for its campaign over public perception.

But the people of Gaza can see through this plan, and most have so far refused to go anywhere near the border fence, let alone take part in the march. As a result of Hamas’s problems in bringing civilians to the fence, it has had to send its own operatives instead.

Hamas will keep trying to mobilize the general Gazan population to the fence. If it succeeds in this goal in the coming weeks, it will also succeed in gaining what it so dearly wants: Legitimacy on the Palestinian street, and in the wider world, as the torch bearer for the right of return.

In the coming weeks, further surprises on the Gaza border are likely. Hamas appears to have planned waves of incidents in the lead up to May, when Palestinians mark Nakba day (mourning Israel’s establishment), and when the US is expected to move its embassy to Jerusalem. The events Hamas has planned are designed to spark uprisings and rioting in east Jerusalem and the West Bank, and ultimately, to enable Hamas to rise to power in the West Bank in place of the Fatah-run PA.

Abbas and Fatah, for their part, could launch their own initiative to try and steal the limelight from Hamas.

Hamas’s new trajectory is clear. It is seeking to orchestrate a ‘popular’ uprising to avoid having to enter into a military armed clash with Israel for now. But if Hamas’s efforts fail, an armed conflict will become likely.
The near future looks set to be explosive and unpredictable.

About the Author
Colonel Grisha Yakubovich (Res.), is the former Head of the Civilian Department in the IDF's Coordination of Government Activities in the Territories (COGAT) unit. In that capacity, he led and facilitated strategic dialogue with the international community, Israeli government and the PA on matters of economics, infrastructure and foreign affairs. He is a renowned authority on Israeli policy in the West Bank and Gaza Strip and brings an unparalleled insider perspective on matters related to those areas. He is policy adviser to Our Soldiers Speak.
Related Topics
Related Posts
Grisha Yakubovich
Comments