I landed back in Israel last Monday after having been abroad nearly two weeks for congresses with my students in South and North America, a (very successful) lecture in Queens, NY, and meetings with media personnel and opinion leaders. It is hard to summarize all of it in one post, but the bottom line is very positive both with regard to my students, and with regard to the people I met.

This tour has demonstrated how much the message of unity as the only means for success (both personal and social) is taking hold in people’s minds. To my students, this message is nothing new, but the depth of their commitment to achieve it was inspiring and very encouraging. Even for Americans, whose culture is one of fierce individualism, it seems that the “me first” culture is beginning to exhaust itself, and they are far more willing to commit themselves to achieving real connection and make real commitment to each other and to the societies they live in. Perhaps it is the sobering up from the delusion of the American Dream, but to see such a profound change happening in over 600 attendees in the NJ congress alone is truly impressive.

But not only students. In my Queens lecture, whose audience was primarily Jewish, the crowd was far more receptive to the message of unity compared to previous years. The US is currently wrought with social crises, from reemerging racial issues, through social and economic growing inequality, to alienation of kin and collapse of the family unit. The Jews have an added woe in the form of growing anti-Semitism. All these coalesce into an atmosphere of insecurity and uncertainty about the future. As it always happens, unfortunate circumstances open people’s minds in search for answers.

I also met with the Editor in Chief of a large Jewish newspaper, who was so open to the message of Jewish unity as the solution to our problems — primarily that of anti-Semitism — that we immediately determined that I would send him my posts and articles for publication, a collaboration we have already begun to implement. Other initiatives to promote unity among Jews are also being explored by my students but will take longer to ripen. Nevertheless, the future of these initiatives looks promising.

Going forward, we will continue our commitment to promoting unity among all factions of the Israeli people as the sole solution to the problems of our nation and the problems of the world. There is much more work to do, but we have friends, Jews and non-Jews alike, who understand the meaning of unity above all differences, above all self-interests, and are willing to do their utmost to share this gift with anyone who is open to the message.

I returned impressed and hopeful, and the task is now to seek new frontiers, so that friendship and love will finally prevail in our agonizing world. 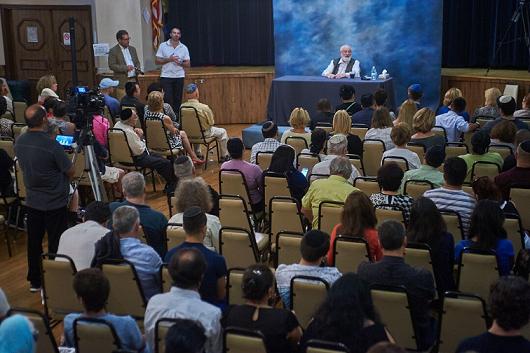