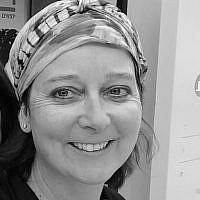 The Blogs
Debra Kiez
An ER doc with heart and soul
Apply for a Blog
Please note that the posts on The Blogs are contributed by third parties. The opinions, facts and any media content in them are presented solely by the authors, and neither The Times of Israel nor its partners assume any responsibility for them. Please contact us in case of abuse. In case of abuse,
Report this post.

Thankfully, recent restrictions in Israel have begun to be lifted. One of these was the prohibition against praying as part of a minyan (quorum). Currently, a total of nineteen people can pray in an outdoor space, if distancing is practiced, and with masks. My husband, who is on the vaad (council) of our local beit knesset, excitedly took the opportunity to help organize a Friday night minyan at our neighborhood park. There was some outcry from members who thought the gathering should be more inclusive and welcoming of women and there followed some lengthy debate on the subject.

Pamela Laufer-Ukeles blogged on this same topic in the TOI last week, articulating concerns which mirrored those voiced in our kehilla. How might women be accommodated in the setting of an outside minyan which follows the halacha that women and men not pray together without a dividing barrier, or mechitzah? What if there are nineteen men, the maximum for a public gathering in prayer, and a woman arrives?

Like Laufer-Ukeles, I straddle two roles. In a modern Orthodox community, a minyan is composed of ten men (only) with no value placed on the presence of women who, it seems to me, are underappreciated. Women’s roles in Judaism are shifting slowly but observance of the rules is challenging when I feel under represented, unnecessary, or even excluded; instead, I focus on other aspects of prayer: interpretation, commentary, and mystical aspects, that allow me to infuse meaning in both prescribed and spontaneous prayer.

Perhaps because I am respected both in my home and at my work as an emergency room physician, with equality and respect from all my male colleagues – I am not intimidated or discouraged by the dichotomy of my professional and spiritual worlds. As different as they may be, I find satisfaction, personal growth, and meaning in both.

It was from this place of equanimity and the opportunity to try something new outside the house – so rare in these COVID days – that I decided to attend Sabbath evening prayers this past week. With my prayer book in hand and my green, paisley homemade face mask, I marched down the road in the early dusk. It was the first time in over a month that I put on a nice head covering, a matching sweater, and stylish boots, knowing that I would finally be “seen”. The park, one where we normally walk our dog each morning, was already filling up with men standing in a jagged row, separated by at least two meters, and chatting quietly. I briefly looked around for an appropriate space for me – all part of the fun and challenge – and found the perfect spot. With bushy greenery to my right and an electric box in front of me, which I used as a shtender (lectern), I took my place. One of the men, in gentlemanly fashion, lent me a stool, and I was set.

As the minyan gathered and prayers started, I marveled at both the irony and blessing of my situation: just weeks after full lockdown due to COVID and on the eve of Yom HaAtzmaut (Independence Day), I had the freedom to choose my own daled amot (personal space) while gazing across the park where several huge Israeli flags fluttered in the calm evening breeze. We had beaten the virus at its own game, for now at least. On this night, nature was playing to the tune of a hundred thousand souls, all welcoming Shabbat.

The usual cadre of local cats, resigned to having their space encroached upon, sat along the grass and watched us with mild curiosity. A cacophony of crows flying overhead, and the repetitive cooing of mourning doves, blended with the muted voices of the men praying nearby. When we said the “Shema”, “hear, O Israel”, I heard God calling out through all His of creation, and I heard my own voice, higher in pitch but resonant nonetheless, calling from my corner – representing the Shechinah, in her own right. As night fell, bats swooped above the olive trees that formed my canopy – it seemed the Sabbath bride had arrived.

Singing “Lecha Dodi”, I fell into a magical spell – spun by the union of voices, animal calls, blooming jasmine scent in the air, and a gentle stillness. Two peacocks screamed in the distance, one playing off the other, interlacing our song with insistent punctuation. A snail slid across a branch in front of me, marking time with its slimy residue. Mosquitoes began to buzz, hastening the end of our prayer time. In the darkness, the men in my distant circle were visible as floating white shirts – surreal, ephemeral. A jackal reproached us with its lonely howl as we disbanded and slowly walked home.

I smiled to myself, knowing I had staked a place for myself just by virtue of showing up. As the saying goes, possession is nine-tenths of the law. I might not be counted as one of ten, but I nevertheless count as one.

About the Author
Debra Kiez is an ER physician in Toronto, Canada (where she spends her summers) and teaches at the Technion American Medical School in Haifa when she's in Israel. She has a special interest in mind-body medicine, narrative medicine, and writing. She has five children, three grandchildren, and an amazing husband who recently shared the aliyah experience. She is inspired by nature, human connection, and the endless pursuit of knowledge.
Related Topics
Related Posts
Comments