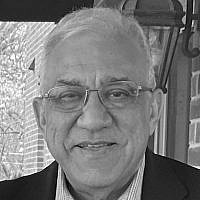 The Blogs
Elliott Hartstein
Apply for a Blog
Please note that the posts on The Blogs are contributed by third parties. The opinions, facts and any media content in them are presented solely by the authors, and neither The Times of Israel nor its partners assume any responsibility for them. Please contact us in case of abuse. In case of abuse,
Report this post.

The recent Israel – Hamas/Gaza war ceasefire raises and triggers a question to me and many Americans  and Jews including those living in our own suburbs – What now ?. Fortunately, through quiet diplomacy, a cease fire was accomplished relatively quickly , but sadly after too much damage and many injuries and deaths, despite Israel’s clear right to defend itself from an onslaught of  thousand of rockets by Hamas.

What must be done in the short term following the current cease fire? It appears that working to create as much stability as possible in the region is the best we can hope for. Though I support and hope for a two state solution, we are a long ways off without extended stability and seeing a viable force to negotiate with who recognizes Israel’s right to exist as a Jewish state. The US can encourage and prod other nations  join with the US in such efforts. As the late Prime Minister Shimon Peres emphasized many times, creating a better economic condition for Palestinians is a key factor for the future of the region.

That is why helping to refurbish and rebuild Gaza is so important while insuring that Hamas does not get access to or control the economic assistance. The fact that Secretary Blinkin met with Abbas as leader of the Palestinian Authority as a first step in supporting Gaza and Palestinians in the West Bank can hopefully restore more credibility to the Palestinian Authority ( PA) if they can orchestrate relief to help win over more hearts among Palestinians in their standoff with Hamas. Though the PA has been weak and diminished in stature before the recent outbreak, they are the only viable player to work with. Other nations and the UN need to likewise work through the PA to bolster their  credibility among the populace. Biden’s resumption of contact with the PA along with economic support to Palestinians, which was a reversing of Trump policy, is a positive development that puts the US back in a position to facilitate positive developments between Israel and Palestinians.

The Israeli Government and the new coalition that might win control must be cognisant that creating that needed stability is in the long term best interest of the entire region. Though the new coalition includes both hardliners and moderates, they must all accept the need to avoid provocation. In addition to being supportive of restoration in Gaza, the Government has to realize that Arabs living in Israel were sensitive and supportive to the Palestinians in Gaza, and the similarly that Palestinians in the West Bank were likewise sensitized with regard to the plight of their brothers in Gaza as Israel inflicted collateral damage in their defensive fight trying to destroy Hamas’s military capability.

In Jerusalem and especially on the Temple Mount, and throughout the West Bank, Israel must minimize provocative actions and  new settlements, and talk of non negotiated  forced annexation, and pursuing  evictions of Palestinians who have lived in certain areas for decades, all of which can ignite protests. In the most recent Israeli election there was more reach out to Arab  and Muslim citizens than in the past. The most recent conflict has clearly reversed much of any goodwill that might have been built up. All leaders in Israel must try to rebuild that outreach to try and minimize and reduce the hostility that built up  before the cease fire. Hopefully the new anticipated governing coalition will be committed to working towards stability and will work toward outreach to all and avoid provocations.

Back in the US, support for Israel has always been bipartisan and still is  among the majority of both parties and their leaders. I am hopeful and fairly confident  it will stay that way despite some rumblings from a small number of vocal politicians and others. I have a concern that some don’t’ appreciate or fully grasp the importance of  supporting ongoing  security for the State of Israel, who has terrorists groups like Hamas and Hezbollah and nations like Iran vow to see it eliminated. We need to remain committed to Israel from a security standpoint. Those who would challenge arms sales and military  support for Israel can only help to put Israel’s security in jeopardy, and diminish the strategic advantage to our own nation to have a strong reliable ally in the Middle East. I know that President Biden is fully supportive is Israel’s security and has stood up to those who have proposed challenges to his most recently proposed arms sales and I applaud him for that.

The challenges that lay ahead following the current cease fire are on many fronts. We must all be strong advocates in urging all to chart courses that can move toward more stability, and be supportive of maintaining a bi-partisan approach at home and urge Israel to reject policies and approaches that might rekindle  protests and further violence. Let us all hope that the cease fire holds and that we begin to see movement in a positive direction.

About the Author
Elliottt Hartstein is an attorney and a former mayor of Buffalo Grove Illinois, lived in Israel for 3 years when he was young and has been to Israel on numerous Missions, through JUF, through Young Leadership Cabinet and through the Wexner Heritage Foundation and also writes a regular Op-Ed Colum for the Northbrook Daily Herald and is a long standing member of the Government Affairs Committee of Jewish Federation of Metropolitan Chicago.
Related Topics
Related Posts
Comments