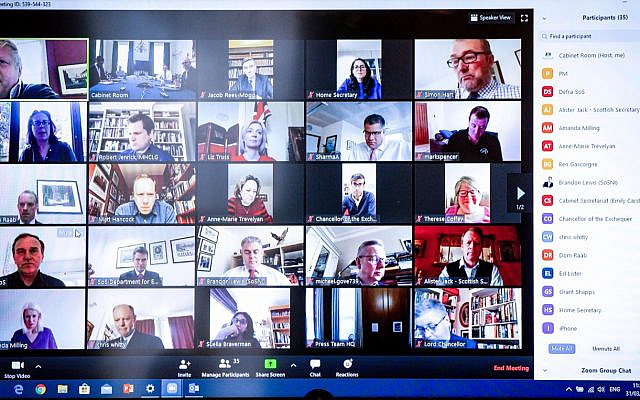 If, and when, we enter a post-Corona era, life will not return to normal. The past two months of isolation have taught us that many of the things that we take for granted in both our personal and professional lives can be organized differently and, in many cases, quite successfully.

Academic life has been disrupted. Not only for students who can not attend their schools and universities, but also for faculty and scholars who had planned to attend conferences and seminars around the world, had spent many months (in some cases over a year) having their proposed paper accepted, writing the paper, getting funding together, preparing complicated travel and accommodation plans, only for everything to be cancelled overnight.

For those of us who are seasoned professionals and who have attended tens, if not hundreds, of such events during our career, it is bad enough. But for young scholars, research students,  who were attending an international meeting for the first time, for whom participation in a conference, meeting fellow students over coffee, and listening to the lectures of the leaders of their profession, whose names they had only ever previously seen on the cover of books or as the authors of the latest journal articles, and who had not yet reached the age of cynicism (“been there, seen it, done it”), this was  a major blow.

Anyone who attends such meetings will invariably be taken by the intensity of young scholars, attending sessions throughout the day and continuing their earnest discussions over late night beers and coffees in the local bars and restaurants. This, we are told, is the reason why such meetings are so important – the physical and social interaction between faculty and students from around the world, senior and junior, those who wish to impress and equally those who come to be impressed.

Make no mistake about it, sitting all day from morning to night, in a  series of consecutive lecture sessions, and then socializing with colleagues over lunch and dinner, attending job interviews, speaking with potential publishers, creating new research projects and consortia,  is not quite as glamorous as it may seem to outsiders. Yes, there are perks to be had through international travel and meeting interesting people, but invariably serious conference attenders are fairly worn out at the end of week long intensive conferences.

But Corona has temporarily brought about an end to international travel and meetings. Equally scholars who are part of international research consortia, or are invited for semester long positions as part of a Sabbatical, as a short term Visiting Scholar or even one off seminars and collaborative workshops, have all had to cancel their plans, some just days or even hours before they were due to travel. Since much international research and publishing today takes place over the internet and through email communication, the bigger impact has been less that it would have been twenty or thirty years ago, but nevertheless the impact has been significant.

From an alternative perspective, Zoom meetings have attracted much larger audiences, from anywhere in the world, and it enables many young scholars and students who would otherwise not have been able to attend the physical meeting, to be part of the event. It also enables conference convenors and moderators to control the interventions and to quite easily cut off people who, as is so often the case, turn their one sentence question into a five minute mini lecture, preventing other participants from joining in as time runs out. Zoom conferences can also be organised at much shorter notice and without many of the logistical, and expensive, preparations which are required.

While academics salaries in Israel may not be that great, Israel offers its academic faculty at the major research universities a very generous travel package, both for year long Sabbaticals once every seven years, as well as annual attendance at major conferences which take place throughout the world. Academics are normally allowed to take up to one week during the teaching semester if they have a paper which has been accepted for presentation, while as soon as the semesters and the examination periods finish (the month of February and the summer months), the planes from Ben Gurion airport are full of faculty travelling to foreign universities, archives and conferences to engage with their international colleagues, to further their own research and, let’s be honest about it, to mix business with pleasure and see parts of the world which we would otherwise be paying for from our own pocket. Adding on a  day either side of a conference for some local tourism, or missing out on some of the conference sessions while we explore the local sights is quite common and understandable, while choosing to engage on summer long research projects at archives, or participating in foreign field work, in places where we can also have a vacation experience and recharge our batteries for the next semester, is common place. It is a luxury which we enjoy as part of our work schedule and it invariably enables us to produce new research findings, new publications and ensure that our own institutions are recognized as being part of the global advance of scientific endeavor.

Foreign colleagues are often jealous of the Sabbatical and conference travel allowance enjoyed by Israeli scholars. But this has always been a key part of  the Israeli academic system. From the outset, Israel wanted to ensure that its own scientific research would always be at the forefront of world scholarship. In order to achieve this, it has always been important for Israeli scholars to be seen and to be heard, to strike up international friendships, to be part of international research teams and to get their research published in the top scientific journals. This is even more so in an era of attempted BDS, although this has not prevented Israeli academics from being invited to foreign universities or for our international colleagues to visit Israel for conferences that are hosted here. To be fair, BDS may have attracted a lot of headlines, but its actual impact has been minimal. Regardless, the presence of Israeli academics at foreign conferences and as guest scholars is an important part of ensuring that BDS ideas do not take root, while sitting around over coffee with foreign colleagues often enables an honest, sometimes difficult, exchange of views about sensitive and contentious political issues.

Those of us who serve as members of the university committees who decide on such critical issues as promotion and tenure for academic faculty,  take into account attendance and participation in top international seminars, publication in top journals, hosting of conferences and major scholars at Israeli universities – often (but not always) at the expense of the amount of time we devote to teaching.  And, at the end of the day, it has proved to be a successful policy. Israeli academic scholarship and its universities compete  well with their international colleagues, even if the rankings have fallen away in recent years compared to where we were twenty years ago. This is partly due to government funding of universities not keeping up with the expansion of universities and their research requirements (an own goal), as well as increased competition as a result of the expansion of universities throughout the world – especially in Asia – as part of the globalization of scientific endeavor. Israeli universities, unfortunately, are way behind when it comes to the recent internationalization and globalization of its scientific institutions.

Israel’s scientific success  has not prevented a brain drain of some of the top scholars, especially in areas such as Medicine, computer technology and Economics, mostly to North America. Israeli scholars are to be found in senior academic positions at  top universities throughout the world – but given the highly competitive nature of some of these establishments, the high wages and excellent research conditions that they can offer, it is not surprising. There is no shortage of new young scholars coming through and whenever we advertise new academic positions in Israel, in almost all disciplines, it is not unexpected to receive over fifty applications for a single post, of which at least 10-15 of them could easily fill the position with excellent credentials and references from leading scholars throughout the world. It is not rare for young academics who have PhD’s from such leading institutions as Cambridge, Oxford, Harvard and Princeton, to be seeking starting positions at Israeli universities.

Back to Zoom conferencing and we can expect a new struggle between administrative and academic staff in the post Corona era. University budgets are continuously being cut in Israel and the  University Presidents and their Budget and Finance staff are always seeking ways to impose cuts. Given the fact that over seventy percent of the University budgets go towards the permanent and tenured teaching staff (tenure is a privilege which is still enjoyed by University faculty, although it is only achieved after years of hard research, teaching and publications, often when someone is well into their forties), it is the junior teaching staff that bears the brunt of most cuts. Eight month salaries, minimal social conditions and little, if any, conference and travelling funds, make it increasingly difficult for junior untenured faculty to survive in today’s academic world.

The administrative staff will be looking at the success of Zoom conferencing and meetings and will no doubt be asking why they should continue to fund expensive travel and hotels for three day meetings half way around the globe. University faculty and students will argue that the physical contact and meetings with colleagues (as too students in a regular teaching class) is of great importance, especially in the creation of future research collaborations across the globe and that Zoom can never be anything other than an emergency solution to crises such as the one we are experiencing at present.

Universities are but one small cog in the many changes that we can expect in the post Corona era. We should not be naïve enough to assume that everything will simply go back to where it was three months ago as though nothing of significance has changed. As the British Chief Rabbi, Efraim Mirvis,  said in a TV interview earlier this week – “Since 1945 we have always referred to the post War era. From now on we will be referring to the post Corona era”. This may be taking it a step too far, but we should be prepared for some serious restructuring and compromises in the world as alternative modes of employment and interaction become the new modus vivendi.

About the Author
David Newman is professor of Geopolitics in the Department of Politics and Government at Ben-Gurion University of the Negev. BIO: David Newman holds the Chair of Geopolitics at Ben-Gurion University, where he founded the Department of Politics and Government, and the Centre for the Study of European Politics and Society (CSEPS) , and served as Dean of the Faculty of Humanities and Social Sciences from 2010-2016. Professor Newman received the OBE in 2013 for his work in promoting scientific cooperation between Israel and the UK. From 1999-2014 he was chief editor of the International Journal of Geopolitics. David Newman moved to Israel from the UK in 1982. In 2017 he was selected as one of the 100 most influential immigrants to Israel from the UK. His work in Geopolitics focuses on the changing functions and roles of borders, and territorial and border issues in Israel / Palestine. For many years Newman was involved in Track II dialogues between Israelis and Palestinians.He has additional research interests in Anglo Jewish history, and is a self declared farbrent Tottenham Yid.
Related Topics
Related Posts
Comments