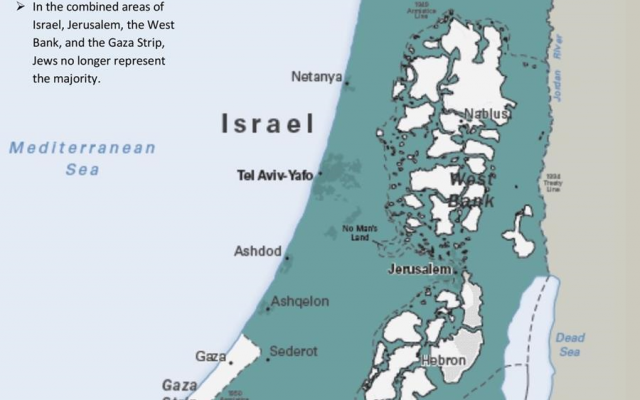 In his valiant struggle to get Congress to fund a wall along America’s border with Mexico, Donald Trump has repeatedly invoked Israel’s success with that sort of thing. He is not the first to mistake Israel’s West Bank security barrier for a border. Israeli voters do it too, and it’s confusing things unhelpfully.

One of the odder aspects of Israeli politics is that the more disdainful voters are toward Arabs, the more likely they are to support the right wing that originally opposed Ariel Sharon’s barrier — and today is still blocking the creation of a separate home for Jews and Palestinians in the Holy Land.

It is worth focusing on, because to the extent that Israel still has a discourse beyond corruption issues, that remains the main issue.

An interesting thing has happened: the Israeli left has mostly abandoned the pursuit of peace as a principle, and rarely invokes a moral argument for ending the occupation in the manner that a genuine left might do. The inobservant still accuse the left of naivete, but its focus has in fact become Jewish national interest: that Israel must save itself by separating from the Palestinians.

In recent years the left’s main party even rebranded as the “Zionist Camp” to draw attention to this gambit, but to no avail: it lost the votes of disgusted Israeli Arabs yet attracted nary a right wing itinerant (it did wrest back some votes from Yair Lapid, a truer centrist, but those stay within the bloc and so lack real consequence).

Many ask how this could be. Are the masses of Zionist Likudniks unable, for some reason, to do the math? In some cases that is so, and there is not much to be done right now about that.

But there are plenty of rightists who actually do understand, yet believe the issue has been resolved. They argue Israel “already separated from the Palestinians,” in the 1990s Oslo Accords. The Palestinians have their government, the logic goes, and there is nothing left for Israel to do but stand firm before their persistent dissatisfactions.

This deluded narrative allows one to support the right without suffering major feelings of Zionist dissonance – even though the right is leading Israel straight into a binational reality that will destroy the Jewish state sure as night follows the day.

Shamelessly, right-wing politicians themselves use this argument, despite the terrifying frenzy with which many of them opposed the Oslo Accords at the time.

There are easily enough people who have fallen for this falsehood to remove the right wing from power if they became acquainted with the facts and flipped their vote. So if I were the Israeli “center-left” I’d make it my priority to demonstrate this ahead of the April election (along with courting the Russian immigrants — secular rationalists cast strangely adrift among religious extremists and a host of others who do not often play chess).

I would suggest this despite the widespread theory that people do not generally vote with their heads and therefore only emotional appeals can prosper. Though sometimes misunderstood, which makes me sad, I am a believer in the better angels of our nature.

Here, then, is why Israel and the Palestinians at present remain intertwined despite the autonomy arrangement and the security barrier:

1) The many autonomy zones known as Areas A are badly disconnected. The Palestinian Authority rules over dozens of non-contiguous islands of territory. Israel controls passage between them and building rights and natural resources in the areas between them. A country does not have to be fully contiguous (see Alaska) but there is a point where total fragmentation becomes unworkable. Look at the above map: does it seem like a reasonable separate country? Imagine if every single Palestinian home were a separate island of autonomy, and Israel controlled all the stairwells, front yards, alleys between them and so on. All the Palestinians would be living under autonomy — but is that a viable separation? No — it remains an occupation. The security barrier creates the illusion of a border but Israel still controls most of the land on the other side, and tens of thousands of settlers continue to live there.

2) The autonomy functions are essentially municipal. Palestinian leaders may strut about acting like leaders of a country, because that’s pleasant and most onlookers are happy to pretend. But the Palestinian Authority has limited powers. It can collect the trash and impose some taxes and do some policing, but is not the ultimate authority. Israeli courts can try Palestinians when they so choose; Israeli security forces can enter the PA areas with impunity; Israel can let supplies in, or not. If you are a Palestinian in need of medical care outside your immediate island and the Israeli authorities have not smiled upon your plan, or some soldiers have had a bad day, or your cousin once belonged to a terror group, you are very much out of luck. (And if you live in Hamas-run Gaza, you are out of luck in almost every way.)

3) Israel controls the external border. Israel controls entry and exit from the land, sea and air and no one gets in or out without its agreement. For many the Israel-controlled Allenby Bridge is the only way in and out of “Palestine.” The government that ultimately governs the Palestinians – not in some theoretical way but in a clear and present manner, with soldiers manning the exit from your neighborhood, is Israel. By the millions these Palestinians cannot vote for that government yet are told its actions must be accepted, because it was democratically elected. This, for 51 years and counting.

4) The friction continues all the time, in the joint-control Area B and Israeli-controlled Area C which together account for most of the land beyond the fence line. There can be no illusion of separation there. Settlers and Palestinians are mixed together with the settlers clearly favored in a variety of ways (the AP did a study five years ago, where I was the Cairo-based regional editor, about what happened to two youths from either side after throwing stones; let’s just say they did not receive equal treatment). The Israeli army roams free and has little choice but to treat Palestinians as a security threat: they really are angry. On occasion one finds segregated roads. Palestinians (and Jewish settlers, in fact) face a maze of no-go zones.

5) The Palestinians are thus not satisfied and do not consider themselves relieved of Israel’s yoke. In the ways described above they continue to face Israeli civilians and settlers, and much of the interaction is one of oppression. Furthermore the security barrier was a little too greedy, gobbling up Palestinian farmlands and other property in its bid to incorporate the maximal number of settlers and make various access routes convenient to them. So the Palestinians do not accept it as the border; there will, at best, need to be amendments.

I have predicted before that this Potemkin village of a Palestine will soon fall apart and the Palestinians will demand annexation and voting rights. Israel will face global pressure to acquiesce. And that may be fine: there is a legitimate outcome whereby the Jews and the Palestinians all live together in roughly equal numbers in a single democratic country probably not called Israel and no longer favoring the Zionist narrative. Many people on the anti-Zionist left seek this as an ideal, and the right is blundering into it without appearing to understand.

Everyone else, though, would be wise to focus their minds: the Oslo Accords and the security fence created the appearance of separation for many Israelis but did not do the same for Palestinians. The Holy Land is not yet partitioned in a way that is fair or sustainable.