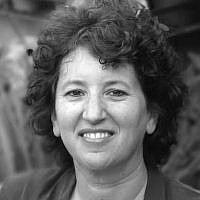 The Blogs
Julie Baretz
Apply for a Blog
Please note that the posts on The Blogs are contributed by third parties. The opinions, facts and any media content in them are presented solely by the authors, and neither The Times of Israel nor its partners assume any responsibility for them. Please contact us in case of abuse. In case of abuse,
Report this post.

Last week marked the beginning of the school year for Israeli children, a particularly exciting occasion for first graders.  I find myself waxing nostalgic for the day, 20 years ago, when I delivered my kids to their first classroom, not only because they’ve grown up so fast but also because my hometown, Jerusalem, has changed so dramatically.  In September, 2016, 77 percent of the first graders in Jerusalem are either ultra-Orthodox Jews or Arabs.  Of the remaining 23%, the children of my tribe — non-religious Jews — are a mere drop in the bucket.

It’s no secret that non-religious Israelis have been abandoning Jerusalem for many years.  No one seems to be able to convince them to stay.  Lack of jobs, high housing prices, terrorism and too many religious people are just a few of the myriad reasons why Israelis turn their noses up at Jerusalem.  So what if it’s the eternal capital of the Jewish people? So what if we dreamed of returning here during 2000 years of exile? So what if Jerusalem received nine of the ten measures of beauty apportioned to the earth? So what if it’s the navel of the world? The painful truth is that most non-religious Israelis see Jerusalem as a place to visit, not to live. Indeed, whenever I look westward, Tel Aviv winks at me.  “Come join us, Julie,” she whispers.  “This is where you belong.”

And so, I often ask myself what I’m still doing in Jerusalem.  When I arrived here in 1985, Jerusalem was the place to be if you weren’t going to a kibbutz (something people did back then…).  Tel Aviv, with its crumbling plaster and stifling humidity, was charmless, unappealing and disappointingly devoid of the magic we Zionist dreamers sought.  In those days, Jerusalem had the finest educational programs, entry-level jobs, authentic restaurants and crisp mountain breezes that cooled the summer heat every evening without fail. There was a buzz that hovered low over the pavements, the hum of a work in progress.  Wherever I looked in Jerusalem back then, I found people like me in the diverse fabric of the city.

Today, I’m a member of a beleaguered minority. Most of the folks I identify with have long bailed for the coastal plain, where they are happier and more fulfilled as Jews, Zionists and Israelis. I remain here in the eternal Jewish capital, together mostly with people with whom I share nothing in common — not Judaism, not Zionism, and certainly not the political vision of a Jewish and democratic state.

My kind of Jews have amassed in Tel Aviv, which in the meantime has reinvented itself as a hub of Hebrew culture with unique architecture, wonderful public spaces, a vibrant discussion of Jewish and Israeli identity and a great vibe.  My Diaspora Jewish soul, weighted down by generations of exclusion, pines for Tel Aviv, the city where most people are like me. (Plus, my curly hair is way more manageable there.)  Should I stay or should I go?

If I decamp to Tel Aviv, I will leave behind my fellow stalwarts, the house of my dreams, a painless work commute, my gym, my back doctor, outstanding cultural institutions, superb research libraries and the best weather in the Middle East. If I decamp to Tel Aviv, Jerusalem will edge slightly closer to its demise as the true capital of the Jewish people.

I’m not ready to leave yet, but I think about the possibility with increasing frequency. Should I stay or should I go? Meantime, I remain in Jerusalem with my finger in the dike, torn between two cities.

About the Author
Julie Baretz is the author of "The Bible on Location: Off the Beaten Path in Ancient and Modern Israel." As a professional tour guide, she has guided thousands of visitors of all faiths to Israel. A native of New York and a Young Judaea alum, she has an MA in Creative Writing from Bar Ilan University. Julie lives in Jerusalem with her husband and two daughters.
Comments