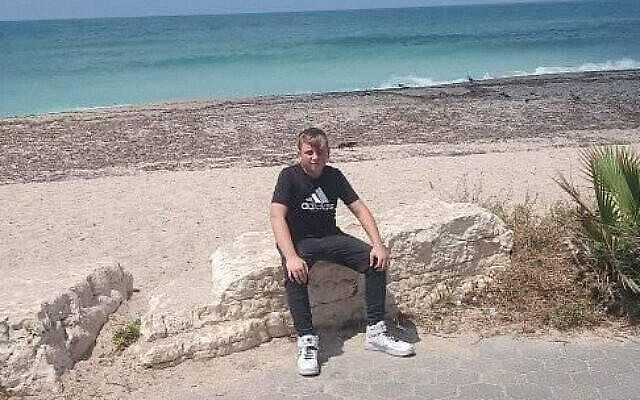 16-year-old Aryeh Schupak, killed in a bombing attack at the entrance of Jerusalem, November 23, 2022. Image Source: Times of Israel.

On 23 November 2022, Israel and friends of Israel around the world cried, when two explosions shook Jerusalem, the capital of Israel, killing a teenager and injuring more than a dozen others in a suspected “combined terror attack,” according to an Israeli police spokesperson and the teen’s family. Aryeh Schupek the victim of the terror attack was a 16 year old boy student at a yeshiva, and lived in the Har Nof neighborhood in Jerusalem, the family said. We pray to Hashem to give the victim of this terror attack place in heaven. 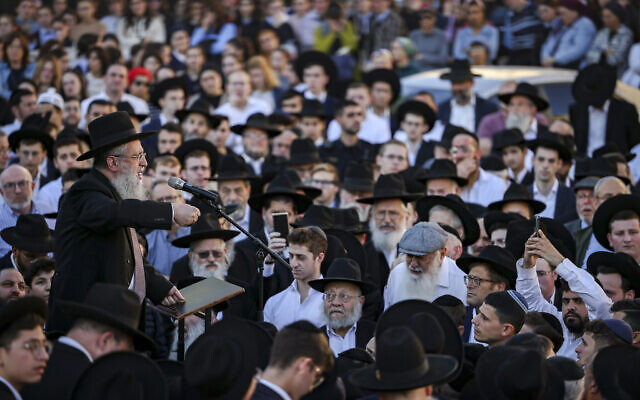 Funeral of Ariel Shttuzpik who was killed earlier today in a terror attack when two explosions at two bus stops at the entrances to Jerusalem left one person killed and at least another 13 injured. Photo by Yonatan Sindel/Flash90. Image Source: Times of Israel.

Readers it is high time for the policy makers around the world to get out of their slumber and work to establish a capable anti-terrorism global architecture. Like Israel bled on 23 November this year, India bled on 23 October and 19 November, when terrorists misguided by the anti peace, Jihadi ideology of fundamentalist Islamists, did terror attacks first in the city of Coimbatore and then in Mangalore in India. Mohammad Shariq the terrorist who did the terror attack in Mangalore, had made the gang members believe that the independence India got from the British was not a real one. They need to struggle further to establish a Caliphate. Only then, India will get freedom, the Shivamogga-based terror module members had told the investigating police team in India. 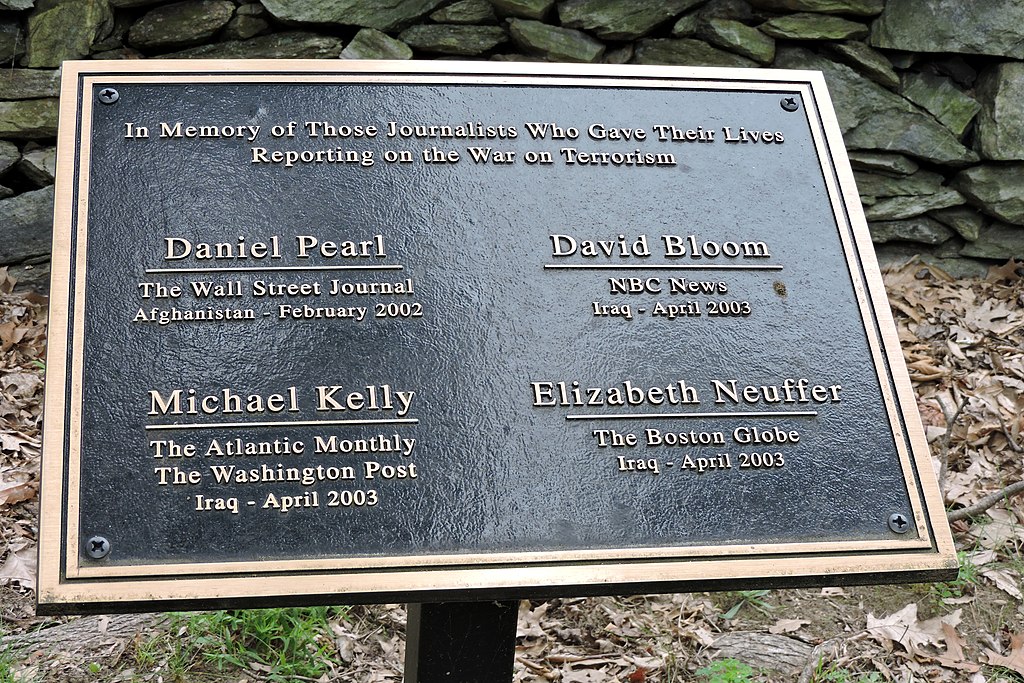 What India’s neighbour Pakistan is doing about terror, is a quintessential case of running with the hare and hunting with the hounds, it is a classical case manifesting plausible deniability and selective amnesia when it comes to terror attacks. Veena Malik a Pakistani actress tweeted about the Israel-Gaza conflict, a so called statement of Adolf Hitler, “I would have killed all the Jews of the world … but I kept some to show the world why I killed them.” Pakistan National Assembly member Kanwal Shauzab said that Hitler was right to kill Jews and called for the use of nuclear weapons against Israel. A court in Pakistan in 2022 ordered the release of British-born Ahmed Omar Saeed Sheikh a terrorist convicted of murdering Jewish American journalist Daniel Pearl who was kidnapped and beheaded in the southern city of Karachi in 2002. This is the extremist ideology of Pakistan’s political establishment, institutions etc, which promotes terrorism, while claiming to be a victim of terror itself, and looking for support from the world. The travesty is that even after all this, there is always China there to support Pakistan when other countries try to build pressure on this nation to stop all terrorism. We need to obliterate terrorism in all it’s forms and manifestations. 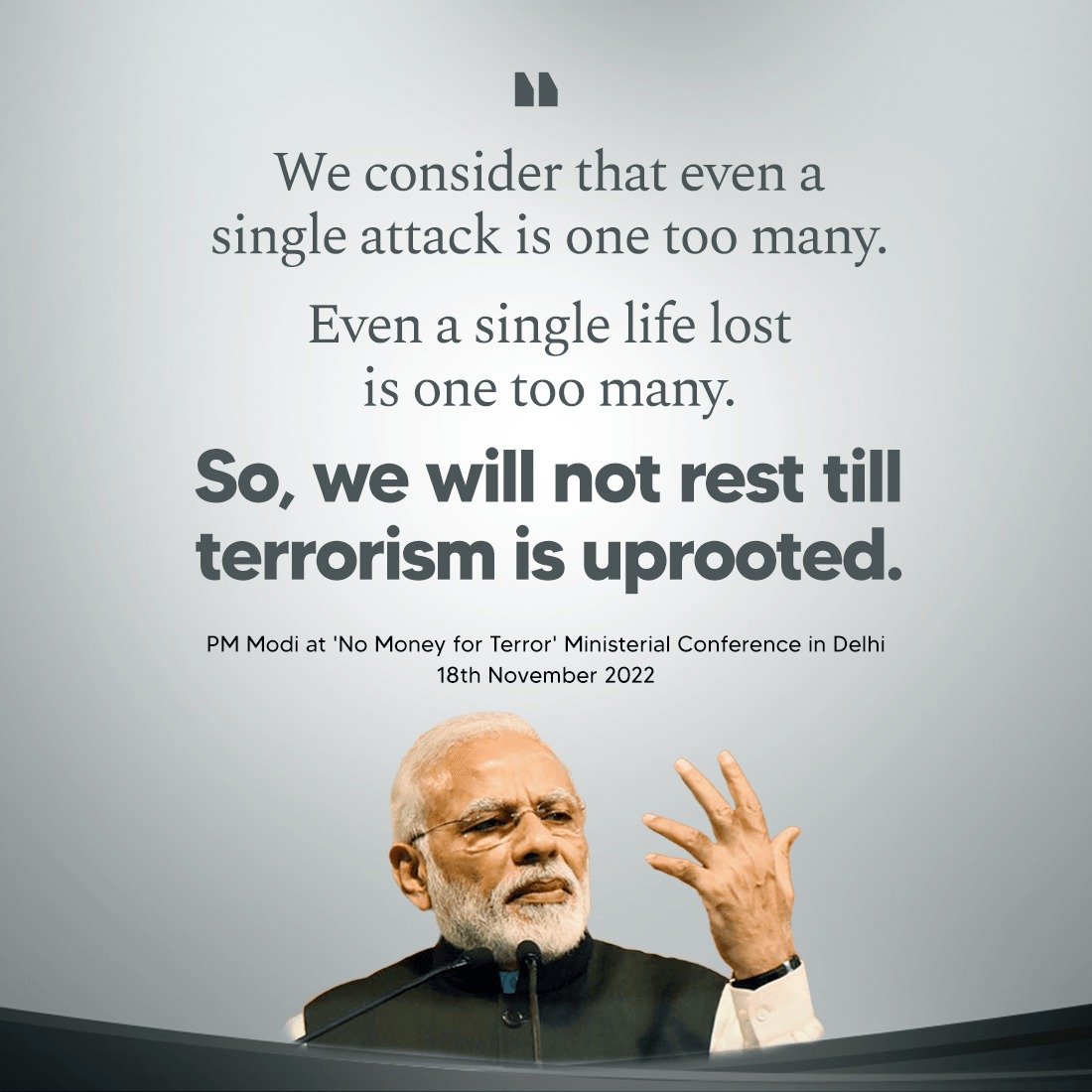 To obliterate the scourge of terrorism from the face of earth more than two decades before, India as a peace loving nation and a prominent voice in international affairs in it’s own right, proposed a draft document on the Comprehensive Convention on International Terrorism (CCIT) in the United Nations General Assembly, through Ad Hoc Meeting resolution 51/210 on 17 December 1996. One of the objectives of the CCIT is to have a universal definition of terrorism that all 193-members of the UNGA will adopt into their own criminal law, but unfortunately there is no unanimity on the definition of terrorism among the member states which is essentially and categorically needed in times troubled with terrorism that we are living in. It is utterly preposterous, on the part of the global community to delay finalizing a commonly accepted definition of terrorism, it is the foundation on which shall be built the stable, capable and approachable super structure that shall obliterate terrorism from the face of the earth. Once the primary stage of acceptance of a definition of terrorism is done by the world community, then to build upon this achievement the CCIT has the following subsequent objectives, to impose a ban on all terror groups and end any terror camps as well. Special laws should be designated and designed to punish terrorists. To make international terrorism an offense universally. 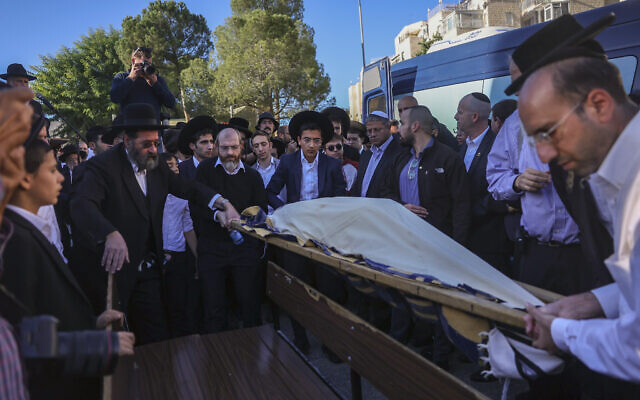 Funeral of Ariel Shttuzpik who was killed earlier today in a terror attack when two explosions at two bus stops at the entrances to Jerusalem left one person killed and at least another 13 injured. Photo by Yonatan Sindel/Flash90. Image Source: Times of Israel.

When it comes to the utterly naive conundrum that we have created about as simple and urgent thing as defining terrorism, we need to know the bulwarks that stand in the way to the acceptance of a common definition of this abominable man made disaster called terrorism. As a manifestation of sad state of global affairs bulwarks, have been placed in the way of the acceptance of CCIT by many countries including the USA and many multilateral bodies etc, as per Organisation of Islamic Conference (OIC) liberation movement activities should be not be included in the definition of terrorism, keeping in mind the Israel-Palestine conflict. For as important a thing as fighting terrorism, can we as a so called civilized species not come together, and stop fighting for just keeping our national interests paramount even when the world’s collective security is in danger? 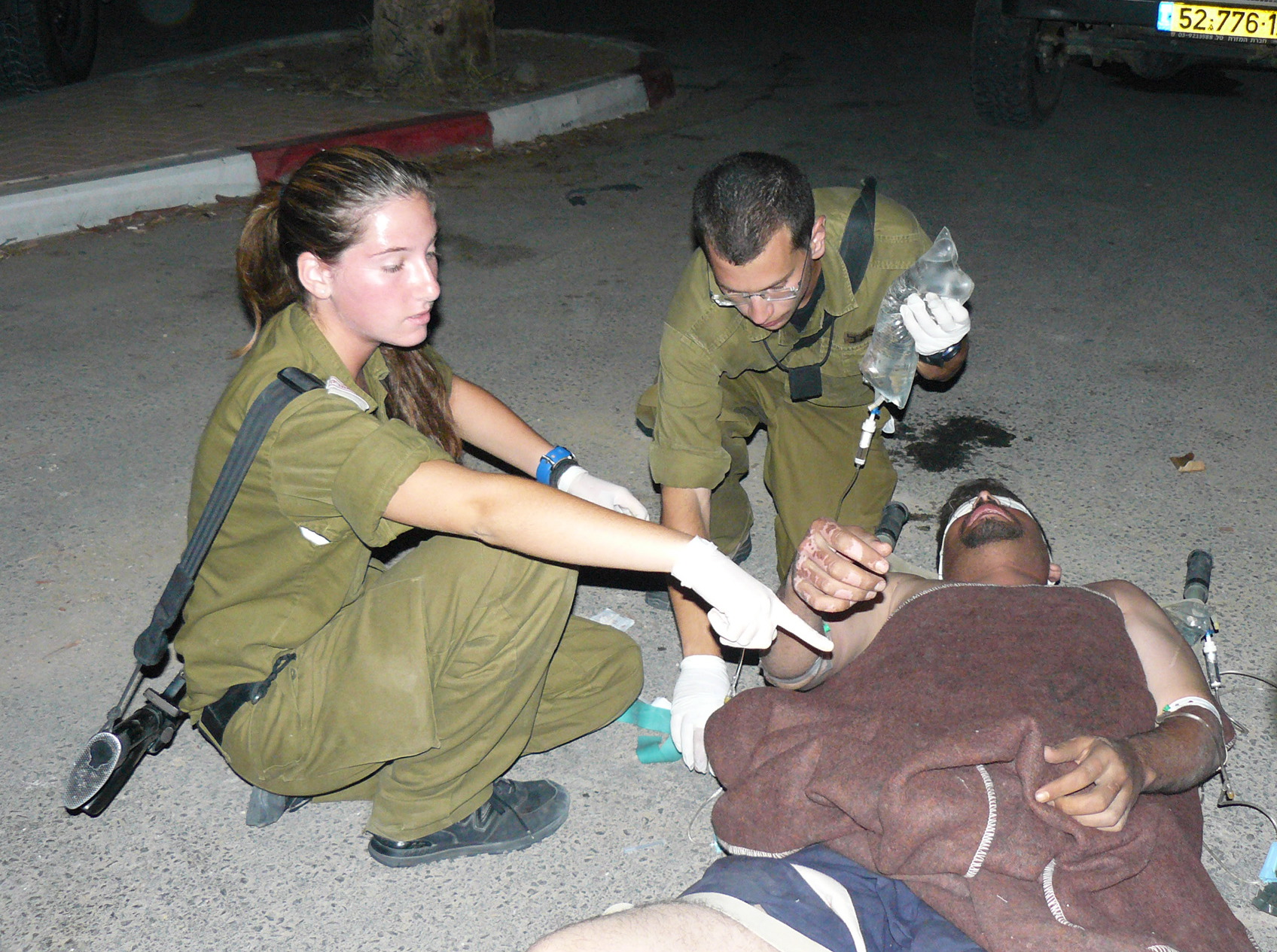 August 3, 2008. A Palestinian receiving medical care from IDF soldiers. On August 2, 2008, approximately 180 Palestinian Fatah activists crossed into Israeli territory, some of them injured. For humanitarian reasons, the IDF allowed Palestinians who disarmed to enter the country. Those injured were given medical treatment inside Israel. Image Source: Wikimedia Commons.

The representative of El Salvador, speaking for the Community of Latin American and Caribbean States (CELAC) at the seventy‑third General Assembly session, described the lack of a definition for terrorism as an unjustifiable legal gap, impacting negatively on human rights and due process. Mr. Amit Heumann Legal Advisor of Government of Israel, mentioned in the 72nd Session of the Sixth Committee of the United Nations that, Israel supports a Comprehensive Convention on International Terrorism that would underscore the fact that – without exception – no cause or grievance justifies terrorism in any form or manifestation. If this committee seeks to continue playing a central role in the field of counter-terrorism, we cannot continue applying different standards to different terror groups. We must adopt a “zero tolerance” approach to terrorism in all of its forms. We cannot excuse terrorism under the guise of martyrdom, so-called “acts of liberation” or those committed in the name of certain causes or by certain groups.

Why is The World Sleeping? 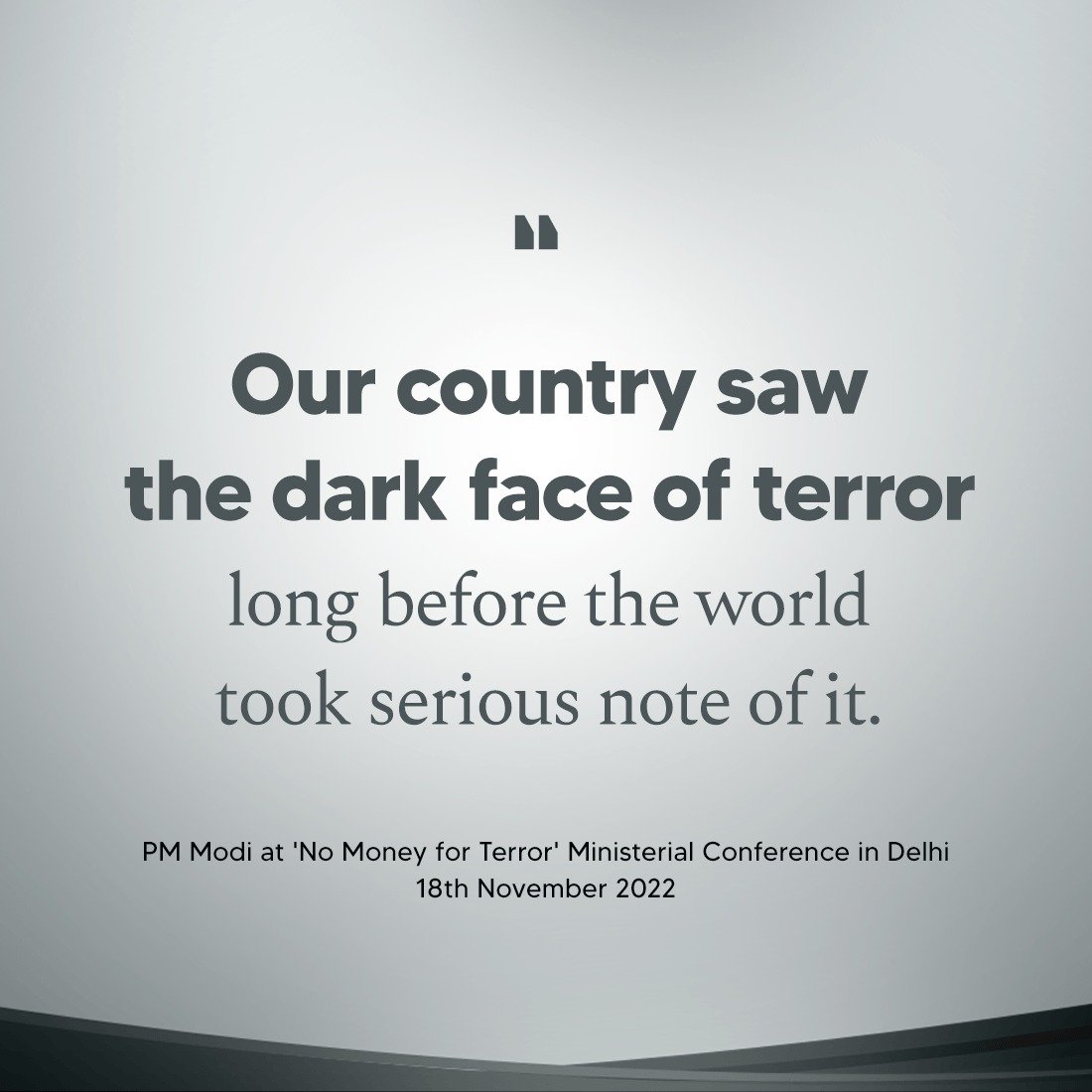 But the travesty is that after all these verbal and written homilies the CCIT has not been implemented yet, as the Sixth Committee, the primary forum for the consideration of legal questions in the General Assembly had created an ad hoc group which is still debating the draft for Comprehensive Convention for Countering International Terrorism. There are several issues but the most important of them is “defining the terms related to terrorism”. Time and again China has been reluctant in declaring Pakistani terrorist Masood Azhar a terrorist. China, being a veto-wielding permanent member of the UN Security Council, has repeatedly blocked India’s move to do so. China is very sensitive about the Uyghur extremists who use violence as a medium of it’s strategic policy, or other Easter Turkistani extremist groups it wants to get global support to stop them from indulging in anti-China violence, but really doesn’t care about other terrorists attacking other countries. The only means to resolve self-determination questions in a civilized society that we all claim to be living in is dialogue nothing more and nothing less.

No Money For Terror Conference Organised In India

India cannot surrender in it’s fight against terrorism, it is a matter of peaceful existence or gradual annihilation for the world, and we can’t let our world get annihilated. Apart from our leadership in bringing the CCIT proposal in 1996, recently the two-day No Money for Terror conference was organised in New Delhi, India on 18th-19th November in order to offer a unique platform for participating nations and organisations to deliberate on the effectiveness of the current international regime on Counter Terrorism Financing and the steps required to address emerging challenges. It was attended by delegates from 72 countries and 15 international organisations, including Ministers, Heads of Multilateral organisations and Financial Action Task Force (FATF) Heads of Delegations.

The conference worked to build on gains and learnings of the previous two conferences (held in Paris in April 2018 and in Melbourne in November 2019) and worked towards enhancing global cooperation to deny finances to terrorists and access to permissive jurisdictions to operate. During the Conference, deliberations were held in four sessions which focused on ‘Global Trends in Terrorism and Terrorist Financing’, ‘Use of Formal and Informal Channels of Funds for Terrorism’, ‘Emerging Technologies and Terrorist Financing’ and ‘International Co-operation to Address Challenges in Combating Terrorist Financing’.

Honorable Home Minister of India Amit Shah in this Conference put forward a proposal to set up a permanent ‘No Money For Terror’ (NMFT) Secretariat in India that would be expected to coordinate global efforts against terror funding more efficiently. Shah said in his speech, “ During the deliberations, India has sensed the need for permanency of this unique initiative of NMFT, in order to sustain the continued global focus on countering the financing of terrorism. Time is ripe for a permanent secretariat to be established. In order to take this thought forward, the chair statement includes the offer to establish a permanent secretariat in the country… India will circulate a discussion paper to all participating jurisdictions for their valuable comments.”

India and Israel United Against Terror 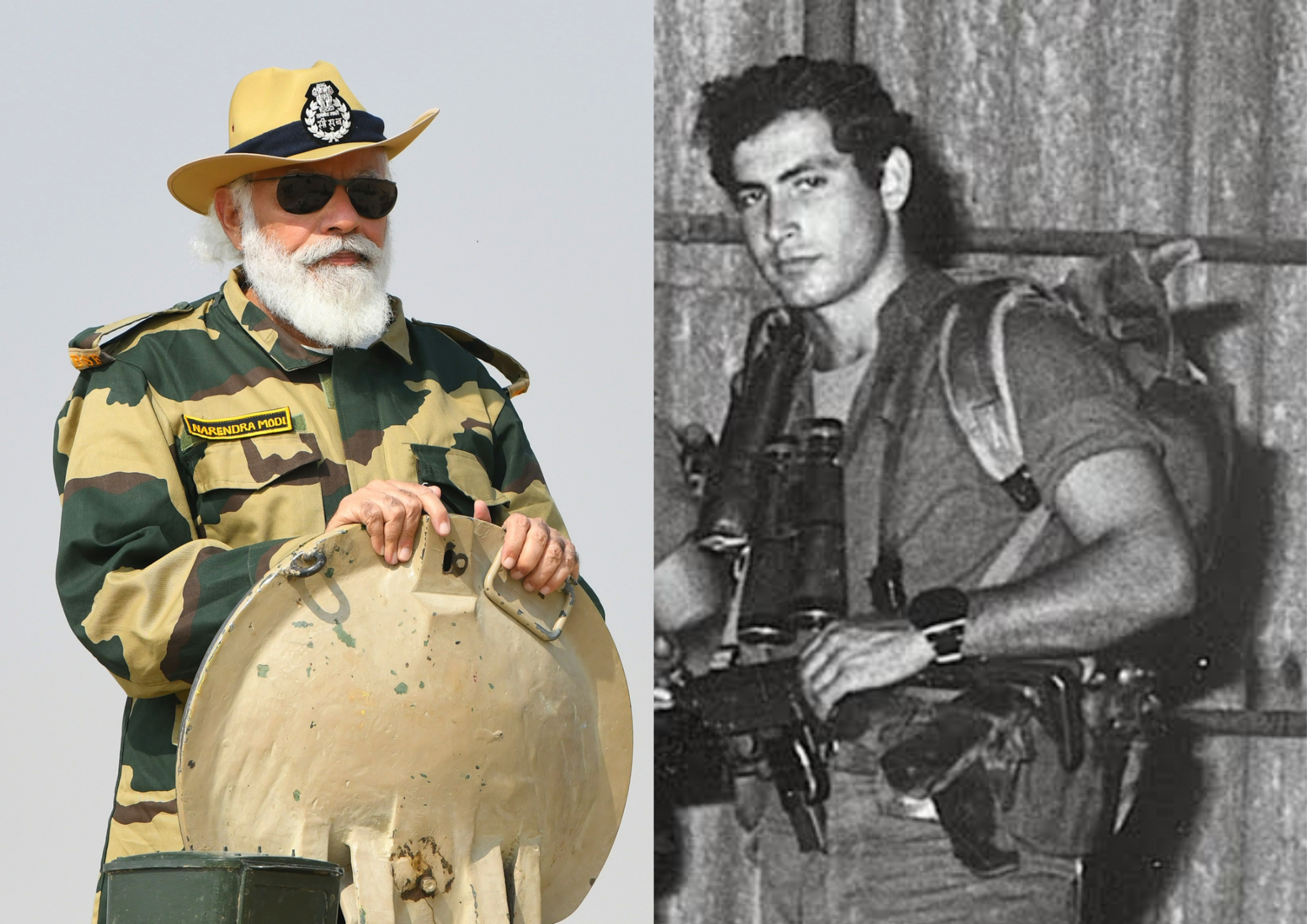 The Lion of Judah with it’s Indian allies has the capacity to defeat terror, not just within it’s own territory, but in the entire world. What is needed is conviction on both sides, to come together as allies to destroy and obliterate terrorism. What Israel needs to do is to support India in it’s anti-terrorism mission, help in establishing the CCIT, and the permanent ‘No Money For Terror’ (NMFT) Secretariat in India. Both our militaries need to train together more often to learn from each other and know about the challenges we face from terrorism, in our substantially different geographies. India and Israel as friends and allies if work with determination towards defeating terrorism and obliterating it from the face of the earth we will Hashem willing for sure achieve it. Hashem is our Iron Dome and we won’t be scared or defeated.