Mt. Herzl. Twice in one day. In the afternoon it is Memorial Day and I am there laying a wreath on behalf of The Jewish Agency in memory of the victims of Arab terror. In the evening, I am back for the gala opening of Independence Day – this time with my 8-year old grandson in tow, getting his first official initiation into my Zionist dream. 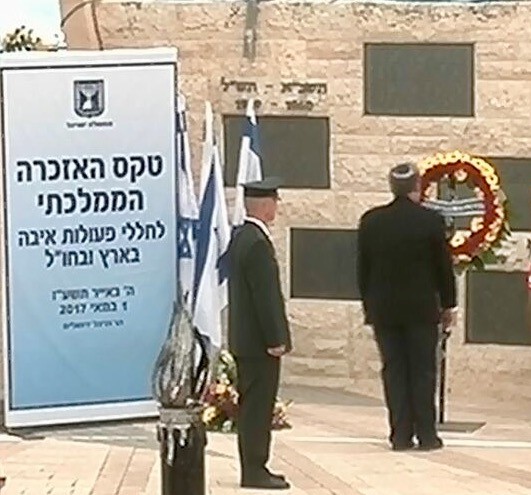 One mountain, two stories. The glory, pride, elation, and wonder of a people returned onto its homeland after 2000 years of Exile. And the pain, anguish, longing and sorrow of the sacred sacrifice that made our being here possible. Herzl’s tomb, designed as an altar and placed at the summit, evokes both.

Mt. Herzl, where those who laid down the ideology for a Jewish state lie side by side with those who laid down their lives for it. Sometimes I wonder: had our visionaries known the price that would have to be paid for their dreams to come true, would they have been so bold in advancing them? Then I ask what price we might be continuing to pay had they not. And I remind myself that I am here of my own free will, that I sent my own children off to the army, and that if our prayers for peace – and our efforts at making peace – should prove insufficient, then in less than a decade the child at my side shall also be called to take up the defense of our nation. And I will see him off with a heart both heavy and proud.

For the past 24 hours, our television and radio stations have been broadcasting the heartbreaking stories of children, girlfriends and boyfriends, fiancés, husbands and wives, fathers and mothers, brothers and sisters who will never return home. It doesn’t matter how many you hear or for how many years. Eyes still swell with tears against the backdrop of somber songs playing continuously throughout the day.

But also a chord of hope. Nasreen Qadri, an Israeli Arab Moslem vocalist who yesterday sang at an official Memorial Day event outside the walls of the Old City, is performing now on Mt. Herzl as well. “I am part of this country, and it’s an honor for me to be invited to take part,” she says in an interview. “For me, being on stage in the ceremony is feeling like I belong… My message is one of peace and harmony, against racism and against violence. Music can bring people together, and that’s what I’m doing.” Earlier, Dr. Amhed Eid, also an Israeli Arab who heads the general surgery department at Hadassah Hospital, was among the twelve honorees lighting twelve torches representing the twelve tribes of Israel, marking the 69th year of our independence with the words “for the glory of the State of Israel.” And all this in a celebration dedicated to the reunification of Jerusalem!

I am neither naïve nor unaware of the complexities of our relations with our Arab neighbors -within and without. And I know that it takes two to tango. But tonight I allow myself a moment of respite from the conflict-induced anxiety that has been etched into the routine of our daily lives and choose to endow the symbolic significance of Qadri’s and Eid’s presence with an anticipation of days to come. In just a moment we will all rise and sing Hatkvah. With our Hope of Return having been fulfilled, it is time that we turn our energies to fulfilling our Hope for Peace. As we get up to leave I give my grandson a hug with a meaning he is blessedly unable to comprehend.

Dr. Breakstone was recently elected as deputy chairman of the executive of The Jewish Agency for Israel, is a member of the executive of the World Zionist Organization and serves as the senior representative to the National Institutions on behalf of MERCAZ Olami and Masorti Olami. The opinions expressed herein are his own.